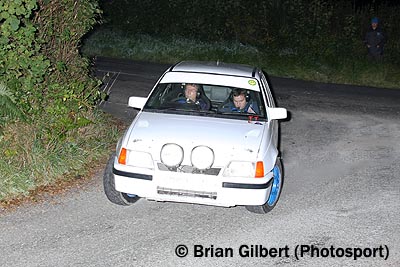 
Jamie Jukes/Dale Bowen repeated their 2014 success when they won the Autumn Rally 2015.

Kevin Davies/Dylan Jenkins had looked likely winners as they arrived at the petrol halt, which was taken at two-thirds distance; they held a lead of over a minute. They had been clean of any penalties under the very last control before the halt. However soon after the restart the cam belt follower broke and, after affecting repairs, they cut to the Finish.

Juke/Bowen had been one minute seventeen seconds behind Davies/Jenkins at Petrol but, in turn, were 43 seconds ahead of 1999 Welsh Champion Neil Griffiths, who had Max Freeman alongside him on the maps. Jukes/Bowen extended this gap and with, the erstwhile leader’s demise, romped home to win by almost four minutes.

Richard Williams/Marc Hughes completed the top three, although they were a further four minutes down, more than eight minutes off the lead. Only eleven crews completed the rally fail free.

John Davies/Eurig Davies, seeded at Number Two, had been expected to challenge for the lead, however a broken drive shaft ended their rally.