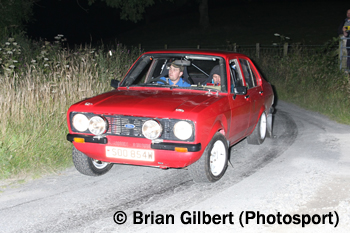 
Cerith Jones/Deian Rees took a hard fought win on the Barcud Rally. It was the driver’s maiden rally victory; for the navigator it was his third win on the event, although his first for nineteen years. The pair had been fourth at the halfway point but hauled their way to the front in the second half, which covered familiar Barcud territory in the vicinity of the rally’s home town, Tregaron.

Top seeds Ian ‘Dude’ Roberts/Gwawr Hughes had been running just behind the leading pack when the alternator on their Golf failed and they arrived at the finish of the section prior to the petrol halt with no lights remaining. This made it two retirements in successive events for the reigning Welsh Champions. Rhodri Evans/Emyr Jones also retired with a broken alternator.

Dale Furniss/Debbie Furniss were the leaders at Petrol but were in trouble; they’d hit a rock just prior to the halt, breaking a bottom arm. It was changed with some assistance but the siblings were to retire in the second half.

It was a case of what might have been for two crews. Both Mark ‘GT’ Roberts/Steve Price and Mike Roberts/Justin Davies booked in early at controls in the first half, in each case adding two minutes to their total penalty; without these mistake either crew could have won the rally.

Steffan ‘DR’ Davies/Dilwyn John were debuting a newly built pristine Ford Escort, which rightly won the Best Presented Car Award. However they were never quite on the pace and then picked up a fail after missing to get a signature for a code board. They were classified in 34th place, without the fail they would have been sixth.

Jones/Rees took the win but had the Impreza of Andy Davies/Lee Taylor just six seconds behind, and Sean Crowley/Dorian Evans were just two seconds further back.

Mered Roberts/Natasha Roberts put in a notable display; they won the Novice Class, finishing in 13th place overall, eight minutes ahead of their nearest category rivals and three in front of the highest placed Semi Expert crew, Arwel Davies/Helen Gilbey.