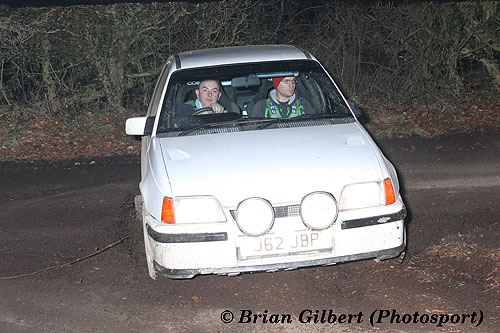 
John Davies/Nick Bloxham fought back from an early error to take victory on The Festival Rally. The Bath MC event saw a cosmopolitan entry, drawn from throughout the UK, tackle the slippery, and later on, foggy lanes of the West Country.

The rally opened with four tests south of Frome, before crews moved west to the Shepton Mallet area, for a series of regularity sections, with petrol being taken at Wells.

Gavin Rogers/Bob Rutherford were quickest through the tests; they were 19 seconds faster than Davies/Bloxham. The surprise here was the performance of Car 23, Mark Lennox/Ian Beamond in their Anglia; they held third, ten seconds behind the eventual winners.

Things changed dramatically soon after the regularity sections commenced. Davies/Bloxham booked into a time control more than a minute early and, with double penalties for early arrival, they had over two minutes added to their total. This dropped them to eighth at Petrol. Rogers/Rutherford dropped to fourth after a wrong slot.

This meant that Nic Morris/Martin Phasey, getting to grips with front wheel drive machinery in place of their usual Escort, led at the fuel halt. They were 42 seconds ahead of Lennox/Beamond, who had Scott Jonas/Chris Perry snapping at their tail just one second in arrears. The latter crew were to fall down the order after missing a TC soon afterwards.

The battle intensified as the route moved to the Chew Valley Lake area. Morris/Phasey dropped two and a half minutes at one control and fell as low as sixth before recovering to third at the Finish. Lennox/Beamond now led but Davies/Bloxham were on a charge and eventually overhauled the Anglia duo as the rally moved back eastwards towards the Finish at Westbury. The matter became immaterial as Lennox/Beamond picked up a fail having missed a PC towards the end.

Davies/Bloxham ended with a misleadingly comfortable victory margin of almost two minutes. This gave Bloxham his second win on the event in three years. Gavin Rogers/Bob Rutherford came back to secure the runner up spot.

Jon Gwillym/Jordan Dziadulewicz had a short and unfortunate event; they were hit in the rear by a non-competing car on the run out to the first test and the resultant damage meant that they had to withdraw before any of the competitive sections.