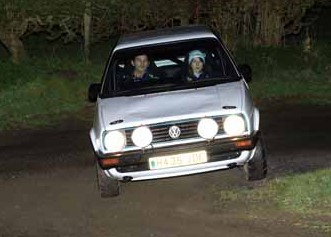 Clerk of the Course: Allen Hart


The Border 100 turned out to be a Golf bonanza as Dale Furniss/Debbie Furniss led home a quartet of VWs in the first four places.

As ever the event was a battle between the fast local crews, with a close fight for the lead continuing over the full length of the rally as almost all sections turned out to be droppers for every crew. However it transpired that the opening four mile timed-to-the-minute section was the decider. The Furniss siblings arrived at its end with just three seconds to spare and cleaned the section; Mark ‘GT’ Roberts/Steve Price and Ian ‘Dude’ Roberts/Gwawr Hughes both arrived seconds after their time and dropped a minute, they then spent the rest of the night in a titanic struggle, trying to make up the deficit. They failed. They narrowed the gap but were unable to make up the 60 seconds. Thus Furniss/Furniss completed the rally 36 seconds clear, giving the navigator her maiden victory.

Peter Roberts/Richard Jackson held off a late charge over the final sections from John ‘Mk1’ Thomas/Max Freeman to claim fourth place and the Expert Class win by just three seconds. Despite the pace of this battle these crews were six minutes behind the top three cars at the front of the field.

Iwan Jones/Stewart Merry had been the only crew to get amongst the fastest three Golfs but a broken driveshaft meant that they had to cut the four final controls and limp to the Finish with one wheel drive.

The Border was the Inter Association Challenge of the year. The WAMC trio triumphed as the team consisted of the top three finishers. Their total penalties were over an hour ahead of the second placed South-Western team; the latter doing well on unfamiliar territory.