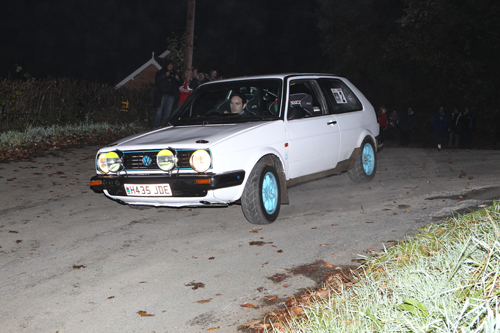 Clerk of the Course: Iwan Jones


Dale Furniss is proving to be the master of his home territory, he followed up his Border 100 win earlier in the year with victory on the Breidden Rally. On this occasion the Golf pilot was partnered by Huw Rhys Manion. After 100 miles of tight foggy lanes the pair finished almost two minutes ahead of their nearest rivals.

The chase was led by a gaggle of local favourites, who were covered by just 30 seconds at the Finish. Ian ‘Dude’ Roberts/Gwawr Hughes took the runner up spot from top seeds Phil Turner/Allen Hart, while Mark ‘GT’ Roberts/Dylan Jenkins were fourth. Turner/Hart ran close to maximum lateness after being delayed by an overheating engine in the first half.

For many of the lower numbers the thick fog meant that it was a battle to stay within their time limits, some cut route to keep on schedule, while others failed to make the Main Controls within their maximum lateness.