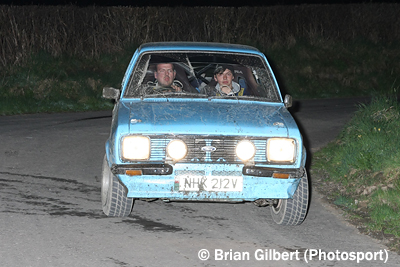 
A storming second half drive saw Gareth Evans/Rob Stephens take a clear win on the Rali Bro Preseli. This was the first time that the pair had competed together and thus they were only in seventh place at Petrol. However the partnership then gelled, they were two minutes faster than any other crew over the rest of the rally and came home well ahead of the field.

From a start number of 27 Wayne Jones/Dan Johnson snatched the runner spot on the penultimate section by just three seconds from Wyn Mathias/Heulyn Phillips; the latter crew, who had been robbed of victory last year due to gearbox failure, had held the overall lead at the halfway point.

Leading Welsh Championship navigator Cadog Davies took a turn in the driver’s seat; second at Petrol, he crashed soon after the restart.