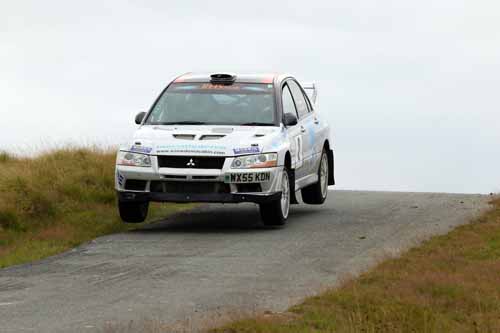 Clerk of the Course: Emyr Hall


Matt Edwards/Glenn Latham emerged from what had been a very tight fight for the lead to claim a clear win on the Gareth Hall Memorial Rally. Edwards’s Mitsubishi Lancer had been pitched against the Escorts of Will Rowlands/Heather Merrison and top seeds Geoff Jones/Simon Jones.

The Trawfynydd Ranges were untypically bathed in sunshine for the day as crews embarked on the first of 12 stages – three sets of four stages split by two service halts. The organisers had been rewarded, not only with fine weather, but also a starters list of 46 cars.

The tone of the day was set on the first stage when these three chief protagonists recorded the same time. Rowlands then edged ahead by being a second faster than Jones on SS2, with Edwards a further second adrift. Jones and Rowlands tied once again on the third stage, before Jones gained the lost second back on SS4, so that the two Escort drivers arrived at the first service halt on the same time; Rowlands taking the top spot thanks to his faster time on SS2. Edwards had taken fastest time on SS4 to be just a second down on the leaders at that point.

After the next four tests Rowlands found himself relying on his SS2 time to keep him in the lead as Edwards had closed the gap and had drawn level with the Escort pilot. In that loop Edwards had taken two fastest times against Rowlands’s one. The latter driver also had problems with his car; the clutch was playing up. Meanwhile Jones was entertaining the crowds, drifting his Escort and climbing the tyre barriers that lined the route. After SS8 he was 15 seconds off the lead and had Meilyr Evans just three seconds behind; Evans having taken fastest time on SS7.

The last group of four stages saw the matter settled as Edwards’s smooth driving style pulled him clear of the rest and he finished the rally 14 seconds ahead. Rowlands had spun at one point but still came home five seconds ahead of Jones, who had opened up the gap to Evans to seven seconds. Matthew Roberts/Sarah Edwards completed the top five and took a clear win in Class 2.

The event was a round of the Gwynnespeed Citroen C2 series and a rally long fight saw Ross Leach/Rebecca Goatman edge out James Giddings/Aled Edwards by just two seconds for the category win.

Geoff McQuilling, a Trawsfynydd regular, made a rare error and put his Honda Civic off the road on SS9. He was fortunate not to roll and came to rest in soft ground. He had to be recovered but managed to get out again in the Trophy Rally for the final two stages.