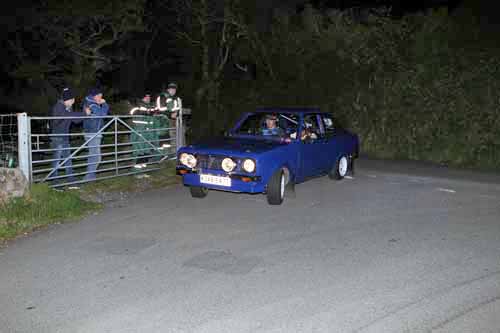 
Arwel ‘Sbidi’ Hughes-Jones/Dafydd Evans dropped just one second all night as they took victory on the Rali Meirion. This was the pairs second successive win on the event and the fifth win for the driver. Their only penalty of the rally came at the very last control.

Dale Furniss/Debbie Furniss had been third at Petrol; at that point they were tied on three seconds with Carwyn Evans/Dylan John Williams but lost out on the furthest clean decider.

However they were the only crew to complete the second half free of penalties and ended the night two seconds down on the winners. Evans/Williams finished third not having quite got into the swing of things after the break.

A puncture cost Mark ‘GT’ Roberts/Dylan Jenkins over two minutes early on and, in such a close contest, there was no way back for them; they finished in 14th place.

Stefan ‘DR’ Davies on his second outing in his new Escort took his second award for the best presented car but then rolled it into retirement.