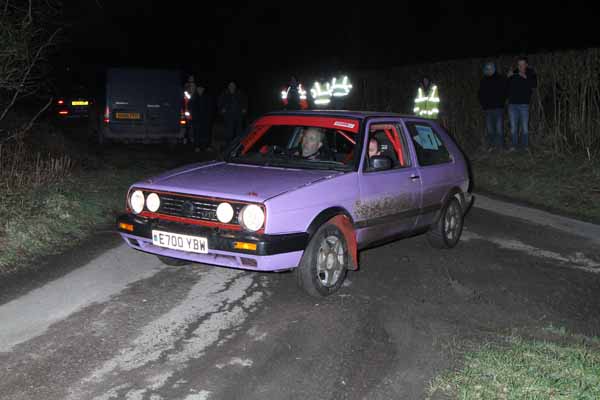 
The Moonbeam Rally saw a tight battle for victory contested between Mark ‘GT’ Roberts/Steve Price and Richard Jerman/Lowri Davies. After trading times through the first half the latter crew arrived at Petrol two seconds ahead. However the matter was decided on the section immediately after the restart where an open gate looked invitingly like the correct route. Roberts/Price nosed their Golf just into the opening before the driver listened to the navigator and headed the right way. In contrast Jerman/Davies entered the muddy field, became stuck and lost 30 seconds. This incident meant that the winners finished the rally 22 seconds ahead, repeating their success of 2013.

James Dowley/Darren Ikin were just ten seconds behind the lead battle when they put their Escort off the road just a few miles before the halfway halt.

A late entry was made by Jonty Bloxham/Nick Bloxham and, despite running at No.18, they held third at Petrol. Nic Morris/Martin Phasey were 10 seconds further back but, in the second half, overcame this deficit to take third by just one second at the Finish.

Aaron Pountney/George Williams were holding fifth place when they became stuck on a white on the section after Petrol and went OTL before freeing themselves. Fifth place at the Finish was taken by Iwan Jones/Allen Hart; they had lost time when they went off the road avoiding the stricken Dowley/Ikin Escort. They dropped from fourth to seventh as a result but recovered two places by the end.

The Semi-Expert Class was dominated by Stefan Morris/Chris Ridge, they finished almost three minutes clear of their nearest class rival, taking twelfth place overall. It was a different story amongst the Novices where Will Maddox/Ash Maddox beat Mark Downes/Neil Morris to the category win by just two seconds.