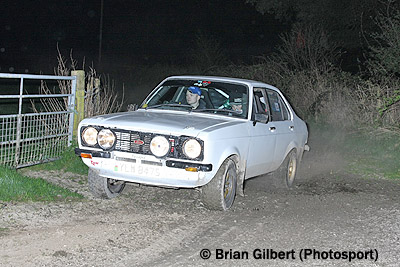 
An incident packed Night Owl Rally was won by Richard Williams/Cadog Davies, giving the driver his first rally victory and the navigator an Aberystwyth DMC double as he had won the same club’s Ystwyth Rally last year.

The organisers had laid out a route that became progressively harder as the night went on. Two crews, Lewis Morgan/Max Freeman and Rali Bro Caron winners Steffan ‘DR’ Davies/Justin Davies, arrived at Petrol clean of any penalties. Neither of these were destined to have a good second halt. The Escort of Davies/Davies developed a severe misfire, which was eventually traced to a plug lead core breaking up. They cut route and limped to the Finish; they ended as the last placed finishers. Morgan/Freeman were slowed initially by an axle problem and then went off the road on the last section. They regained the road and finished in seventh place.

The winners had been in seventh at Petrol but a storming second half saw them leap their rivals to take first place. This was despite picking up a puncture on the penultimate section.

The runner up spot ended with two crews on the same penalties and the position had to be decided by a ‘furtherest clean’ tie break; Rhodri Evans/Dilwyn John edging out Dale Furniss/Debbie Furniss after being quickest by 17 seconds to TC4S.

The top two seeds Mark ‘GT’ Roberts/Dylan Jenkins and Ian ‘Dude’ Robert/Gwawr Hughes lost time on the seven mile section leading up to Petrol when they came across a set of arrows that had mysteriously been altered after the passage of the course cars; this caused them to do an extra loop and led to the section being scrubbed at the Finish.