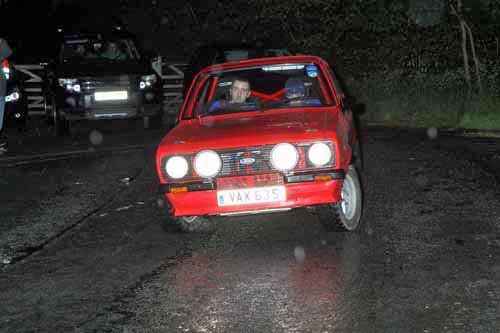 
The result of the PK Memorial Rally was decided on a tie break after both Iwan Pritchard/ Max Freeman and Kevin Kerr/Huw Rhys-Manion finished on the same penalty. The matter was decided in favour of the former crew as they had cleaned the rally’s opening section, while Kerr/Rhys-Manion had dropped three seconds.

The winners led by 23 seconds at the halfway point, however they were overhauled by their Escort rivals on the penultimate section. They regained time on the final test to draw exactly level at the Finish.

There was an equally close battle for third where Dale Furniss/Debbie Furniss overtook Ian ‘Dude’ Roberts/Gwawr Hughes with two sections to go.

It was a poor event for 2014 winners Arwel ‘Sbidi’ Hughes-Jones/Dylan John Williams. They lost time retracing their steps to get a control just before Petrol and then picked up two fails for booking in early at the final MC.