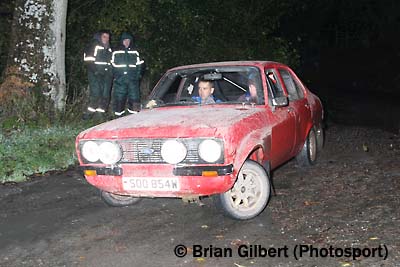 
A shortened Powys Lanes Rally, the final round of the Welsh Championship, was won for the second year in succession by Irfon Richards/Michael Gilbey. The result had to be declared at the petrol halt as problems with the venue’s pumps meant that most of the field were unable to refuel.

Cerith Jones/Dilwyn John led the rally up until the section before Petrol but a wrong slot and then a miscalculation of times saw them add three minutes to their total; they finished in 16th place.

Richards/Gilbey finished 14 seconds ahead of Andy Davies/Lee Taylor, although the results may have altered if the event had run its intended distance. Unaware of the problems behind them, the leading crews had started the second half and on the first section Davies/Taylor had taken the lead from Richards/Gilbey.

Russell Wooley/Dale Furniss put in a late entry and, from a start number of 48, finished in third place.