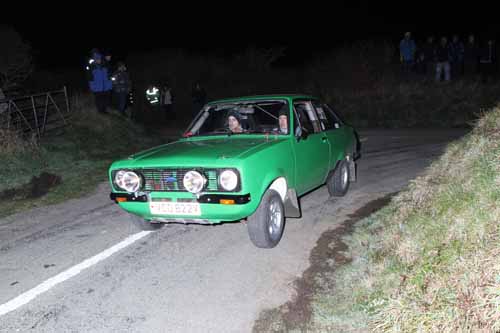 
Youth was triumphant when Kevin Kerr/Huw Rhys Manion overhauled halfway leaders Carwyn Evans/Dylan John Williams to secure victory on the Merfyn Hughes Memorial Rali Llyn. The latter crew held a 19 second lead at the petrol halt, but the winners, who had led after the first section, reduced the deficit steadily and took the lead once again at the three-quarter mark. By the Finish their winning margin was 39 seconds.

There was a high attrition rate amongst the leading crews; of the top 15 starters only six made it to the end of the event. The bone dry conditions put a great strain on a car’s drive chain; drive shafts took a particular beating.

Arwel ‘Sbidi’ Hughes-Jones/Dafydd Evans were in a close third place at Petrol, five seconds down on the eventual winners, but they went out with gearbox failure shortly after the restart. Dale Furniss/Debbie Furniss retired from fifth with gear linkage problems, while Steve Roberts/Daniel Llywelyn Jones were lying one place further back when they were forced out with a severe misfire. Failed alternators accounted for both Iwan Pritchard/Ianto Jones and Haydn Davies/Max Freeman.

Ian ‘Dude’ Roberts/Gwawr Hughes suffered a broken engine mounting in the first half; this delayed them and they were only in eighth at the halfway point. However the broken part was strapped up at the halt and they recovered to finish in fifth place. Mark ‘GT’ Roberts/Dylan Jenkins were an early retirement when they lost all oil pressure on their Golf.

Mark Parry/Sion Higham held a lead of over a minute in the Semi-Expert Class at Petrol but a storming second half run from Gethin Povey/Iwan Llyr propelled them to the category win and ninth place overall. Gareth Davies/Bryn Jones won the Novice Class, finishing over three minutes ahead of their nearest class rivals.