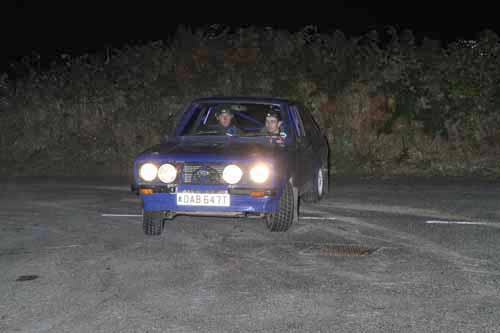 Clerk of the Course: Paul Morris


Arwel ‘Sbidi’ Hughes-Jones secured the North Walian Welsh Championship Double by following up his win on the Rali Meirion two weeks ago with victory on the Rali Mon. On this occasion he was partnered by Dylan John Williams and the pair held off a strong challenge from Iwan Pritchard/Max Freeman to win by 12 seconds.

The result could have been different but a for a loss of concentration by the latter crew on a section through the maze of lanes near Beaumaris. On this test, just before the Petrol halt, Pritchard/Freeman dropped 40 seconds to their rivals and, despite an heroic charge through the second half, they were unable to make up the lost ground.

Dale Furniss/Debbie Furniss held second at the halfway point and were maintaining that position when, on the last section, the coil pack on their Golf failed and they were forced to cut to the Finish.

Rali Llyn winners Kevin Kerr/Huw Rhys Manion were expected to challenge for the win but were an early retirement with gearbox problems on their Escort.