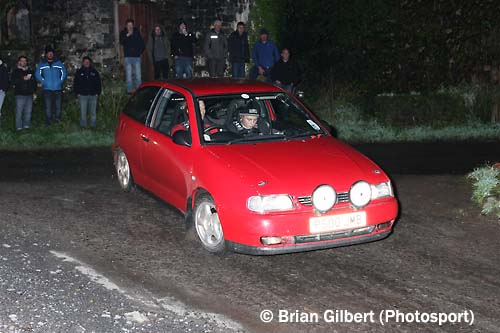 
Reian Jones/Cadog Davies kept their Welsh Championship hopes alive by charging to a clear win on The Autumn Rally. They finished a demanding 130-mile event over four minutes clear of the 90 car field.

Second place was taken by Ian ‘Dude’ Roberts/Gwawr Hughes, who now need just one more top score to take the lead in the Welsh series as dropped scores affect those currently at the top of the table. Present championship leaders Polly/Chris Ashley came in seventh and still have a 100% finishing record after ten rounds.

Top seeds Dale Furniss/Nick Bloxham went out in the first half, while John Davies/Aled Richards got stuck in mud after sliding off the road after Petrol.

Huw Jones/Lee Taylor held second at Petrol but were amongst a large number of crews who missed a tricky route check in Brechfa Forest. Kevin Davies/Owain Davies would have finished second but missed a code board.