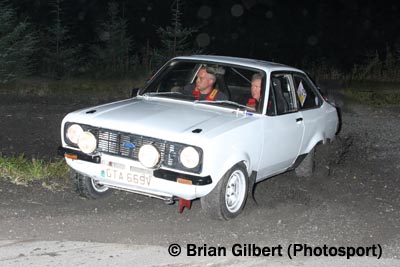 The first half of the rally was a single competitive section, unfortunately most of this had to be scrubbed after a mid-field car broken a ball joint on a narrow lane, blocking the road for all the following car. This just left the times at the first control counting at the halfway point, however the second half contained sufficient ‘droppers’ to ensure a clear result.

The winners had been in fifth at Petrol but a storming second half drive saw them well clear at the Finish. Their winning margin might have been even greater but they were delayed catching a slower car entering a control timed to the minute and missed their time, adding 60 seconds to their total.

Justin Jones/Dafydd Evans led at Petrol, helped by the fact that the opening section passed the driver’s home, but they couldn’t hold off the winner’s charge after the restart.