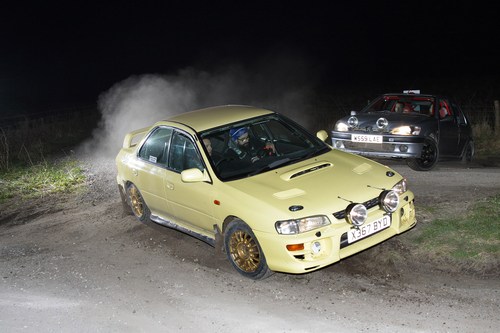 The rally, in its fifth year under Dave Whittock’s control, attracted crews from all over the country to make up an excellent 66 car starters list. They faced a daunting route which included a number of forestry roads.

The winners, using Andy Davies’s Impreza, were never headed, although their lowly seeding meant that they suffered significant baulking. The win was Powell’s first in nine years.

Nic Morris/Martin Phasey, who went well on this event last year, kept the leaders within sight throughout the night and were never far behind. They were 25 seconds down at the end.

Third place fell to Dei Jones/Iwan Jones who had to contend with an event-long misfire.

Top seeds John Davies/Max Freeman had a troubled night. They lost all their lights on the first test. They had recovered to fourth place when their Astra’s clutch failed.