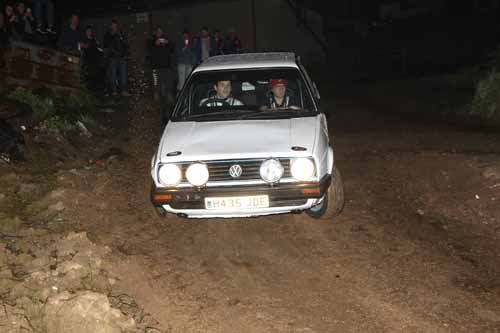 Clerk of the Course: Allen Hart


Event sponsor Dale Furniss took his second successive win on the Border 100 Rally, when he had navigator Nick Bloxham led for most of the event over a tough and intricate route.

They tied for the lead with Iwan Jones/Stewart Merry after the 22 mile opening section, which included seven intermediate time controls. The latter crew slipped up on the second section and allowed Furniss/Bloxham to open up a lead that they weren’t to lose.

The chase was taken up by Mark ‘GT’ Roberts/Steve Price, but they were already 30 seconds down and finished over a minute behind the winners at the end. Jones/Merry took third; these three crews being well clear of the rest of the field.

There was a high attrition rate with just 38 of the 88 starters making the Finish. Ian ‘Dude’ Roberts/Gwawr Hughes developed electrical problems on the opening test. They stopped and changed the alternator but the issues reoccurred almost immediately. The source of the problem was traced to a faulty wire but by then they had lost a huge amount of time and retired.

Will Arrowsmith/Ceri Davies had held a top ten position until a broken fan belt cost them precious time. Meanwhile John ‘Mk1’ Thomas/Neil Spier retired after becoming stuck on a triangle.