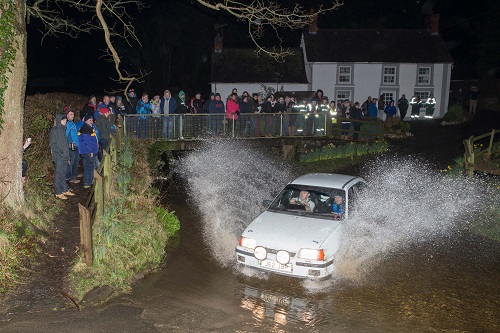 Clerk of the Course: Edryd Evans


An incident packed Rali Bro Caron was won by John Davies/Aled Richards, who emerged from a tight tussle for the lead as many of their rivals hit problems.

Irfon Richards/Max Freeman held a 40 second lead at Petrol but soon after the restart they lost over three minutes when they hit standing water and lost their electrics. They continued to the Finish and would have been classified fourth but were excluded for a give way offence.

Davies/Richards had been in second at the halfway point but had Dale Furniss/Nick Bloxham just one second behind. The latter crew were delayed in the second half, initially by a rear caliper problem and then by a broken gearbox mounting. They survived and would have taken sixth but for a wrong approach at a PC, the resultant fail dropped them further down the order.

These dramas meant that the battle for first place was between the winners and last year’s victors, Steffan ‘DR’ Davies/Justin Davies. The latter crew reduced their halfway deficit slightly but were still 30 seconds behind at the Finish. However the result was enough to give Steffan ‘DR’ the lead in the Welsh Championship.

Defending Welsh Champions Ian ‘Dude’ Roberts/Gwawr Hughes were delayed by a misfire in the first half but finished fourth.