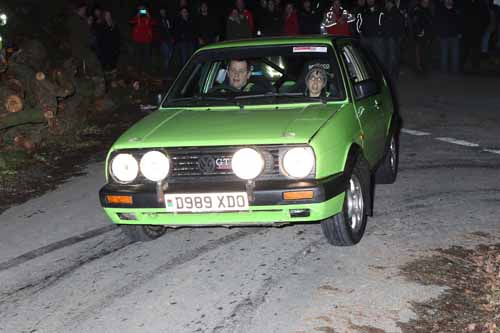 
Ian ‘Dude’ Roberts/Gwawr Hughes made a perfect start to their campaign to claim a hat trick of Welsh Championship titles by taking outright victory on the Rali Mike Darowen Bro Ddyfi, the first round of this year’ series.

It was a tough event, just 24 of the 53 starters made it to the Finish. The winners dropped almost 16 minutes but were still two minutes ahead of the runners up, Stefan ‘DR’ Davies/Michael Gilbey. An 11 miles/22 minute section in the traditional Bro Ddyfi area around Aberhosen caused particular difficulties; the fastest crews picked up three minutes of penalties, whilst others dropped ten times that.