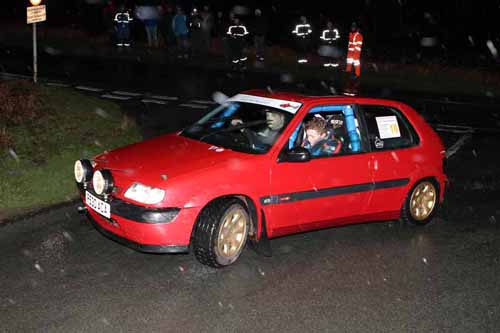 
From a start number of 16, Rhys Llywelyn Jones/Daniel Llewlyn Jones came through to be surprise winners of the JJ Brown Memorial Rally.

The event had been postponed from its original date in December, after heavy rains led to flooding in the Caernarfon/Bangor area. Despite torrential rain - and at times snow - that fell throughout the night the rearranged rally ran without any of the route having to be cut.

At Petrol Kevin Kerr/Max Freeman had dropped just 2m27s and held a lead of three minutes over Llion Williams/Cadog Davies; Osian Vaughan Williams/Sion Tegid Tomos were in third, just three seconds off second place. However none of these crews were to make the Finish. Williams/Davies withdrew at the halt due to a broken exhaust, while the leaders broke a shaft on the first sections after the restart.

The winners, fourth at Petrol, dropped time on the cleanable penultimate section but held on to finish 32 seconds ahead of Endaf Jones/Merfyn Williams.

The rally proved to be a tough challenge, only 26 of the 57 starters were classified as finishers. Attrition was highest in the Expert class where just seven of the 19 crews in that category got to the end.