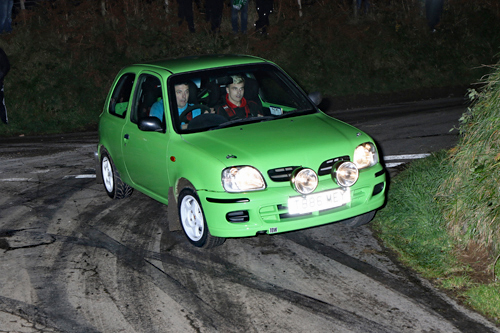 Clerk of the Course: Huw Manion


Two years ago Gary Ollerenshaw/Jamie Ollerenshaw had been in contention for the win of the Rali Goffa James Trenholme, but they threw it away when they booked in early at one time control, this year the father and son team made no such mistake and came home to win the novice oriented event by exactly two minutes, they had led throughout the event.

Gruffydd Jones/Iwan Williams had been 47 seconds behind the winners at the halfway point, but they lost ground in the second half and almost fell into the grasp of third placed Bryn Jones/Gareth Davies, who were only nine seconds behind at the Finish.

Semi-Experts crews could enter but weren’t eligible for overall awards. The class was won by 2014 overall winners Gwynfor Jones/Chris Evans. Their total penalty was three seconds behind that of the Ollerenshaws, but over three minutes ahead of their nearest class rivals. The category had been led at halfway by the BMW of Iwan Rhys Jones/Steffan Llewelyn, but they retired in the second half.

This was Harlech & DMC’s third road rally of the year and not only did it provide a training ground for novice crews, it also raised money for local schools.