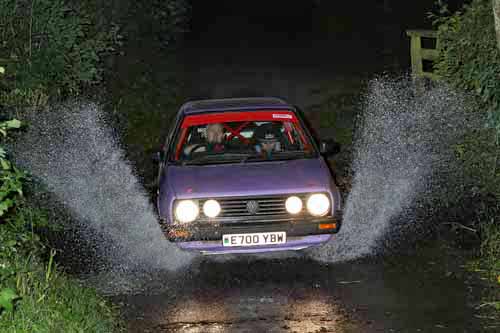 
Mark ‘GT’ Roberts took his second successive victory on the Pacemaker Rally. For his navigator Cadog Davies it was a second win within two weeks. The pair dominated the event, finishing six and half minutes ahead of the field after having only picking up penalties of two minutes forty themselves.

The Pacemaker was a rarity for a Welsh event in that it ran under a navigational permit and consisted of regularity sections linked by neutrals. There were three route had out during the night.

By the petrol halt the winners had built up a lead of almost a minute over Ian ‘Dude’ Roberts/Gwawr Hughes. The latter pair disappeared during the second half when the steering broke on their Golf. This allowed the runner up sot to be taken by the 205 of Gary Roberts/Darren Ikin. Richard Hunter/Gary Evans made the journey from Derbyshire and secured third place overall.