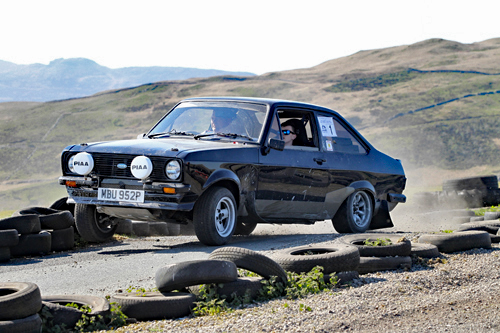 Clerk of the Course: Chris Evans


Bala & District MC’s first targa rally, the Rali Cwm Cynfal, was dominated by the Escort of Steven John Williams/Sion Williams, the pair finishing the event almost a minute and a quarter ahead of the maximum entry field.

The winners took fastest time on half the rally’s 14 tests, these included runs in the Llechwedd Quarry, the event sponsors, and the Trawsfynydd Ranges, plus a number of tracks in between. While the Escort crew romped away, there was a tight battle for second place. Initially this was led by Kelvin Evans/Alan Evans, however a 30 second cone penalty on the penultimate test demoted them to eighth at the Finish. This allowed Gary Edgington/Kate Bannister, on the navigator’s first rally, to secure the runner up spot.

Behind them a family battle was won by just one second as Lee Matthews/Endaf Davies took third and Sion Matthews/Jamie Williams finished in fourth.