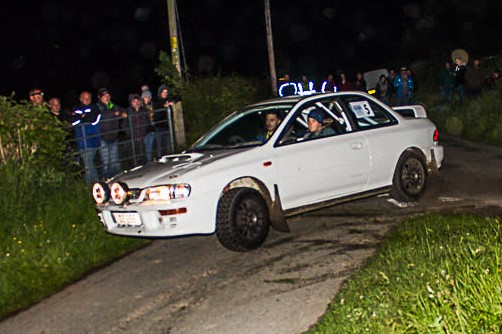 Clerk of the Course: Richard Jerman


Having secured a class win on the Severn Valley Stages during the day, Andy Davies/Max Freeman went on to take an outright victory overnight on the Eagle Road Rally, Round Six of the Welsh Championship. They were fastest on the opening section and led throughout the event, finishing over 30 seconds ahead of Irfon Richards/Mike Gilbey and 44 in front of third placed Mike Roberts/Dafydd Sion Lloyd. Both of those navigators gaining useful WAMC points.

The event was short, just 75 miles, but highly competitive; the leading crews dropped time at seven controls, while most were penalised at nine.

Dale Furniss/Nick Bloxham wrong slotting on the first section and dropped 1m34s to the winners as a result. They finished in fourth place, 1m42s off the lead. Kevin Davies/Dale Bowen withdrew after losing two minutes on a cleanable section when they picked up a puncture. Mark Lennox/Ian Beamond had a rare retirement, going out with a broken fan belt.

It was a very short event for Phil Jones/Iwan Jones, their Escort broke a drive shaft at the start of the first competitive section.