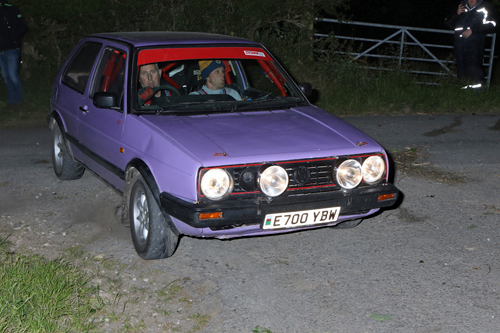 
Mark ‘GT’ Roberts/Dylan Jenkins made themselves the front runners to win the Welsh Championship by securing victory on the PK Memorial Rally, as their main rivals either didn’t start or failed to make the finish. The pair had only been in sixth place at Petrol, however a tougher second half created a shake up in the overall standings and they came through to win by over half a minute.

Steven John Williams/Dafydd Sion Lloyd held a slender five second lead at the halfway halt, but went off the road and out of the event soon after the restart. Jon Bossen/Peredur Davies were in second at Petrol but fell back to fourth at the Finish. Pre-event favourite Arwel ‘Sbidi’ Hughes Jones admitted to being rusty; he and Dylan John Williams struggled home in seventh place. Kevin Kerr/Huw Rhys Manion withdrew after dropping time with a wrong slot.