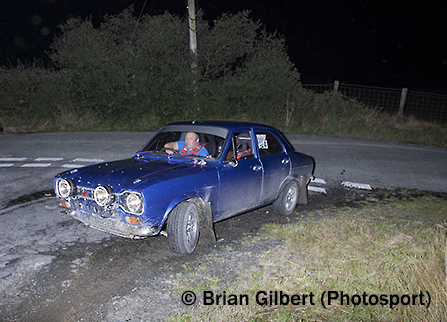 
Pwllheli’s Gavin Wyn Edwards, partnered by Cadog Davies, took a commanding win on the Barcud Road Rally. Leaders at the petrol halt, the pair cleaned the second half of the rally to win by over a minute. Paul Morgan/Jamie Mills continued their good run of results, taking the runner up spot despite being baulked on critical sections.

Third place was taken by Stefan Davies/Dafydd Sion Lloyd, they could have won but for booking in early at one time control and picking up an unnecessary two minute penalty.

Kevin Davies/Andrew Edwards had been just eighteen seconds off the lead at the halfway point, but they retired with brake problems in the second half. Gordon Meakins/Alan James and Kevin Jones/Dafydd Evans had been third and fourth place respectively at Petrol, but were also on the retirement list after the restart.

The Semi-Expert Class was won by Dafydd Jones/Trystan Leyshon, who finished in eighth place overall, over two and a half minutes ahead of their nearest category rival.