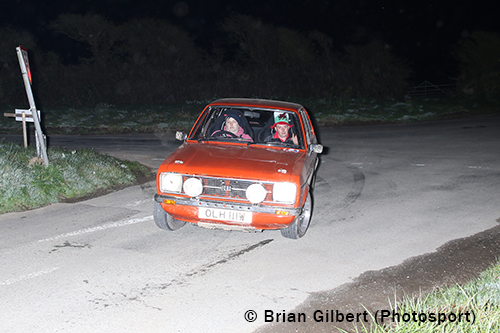 
John Rossiter/Iestyn Pynn overcame a traumatic start to win the Rali Bro Preseli. Their Escort dropped a rocker into the sump on their way to the start and, after a major extraction and rebuild operation, they made Scrutineering in the nick of time. They were almost a minute off the lead at Petrol, but, covering home ground, they were easily the quickest crew in the second half and took a clear victory at the Finish.

Leaders at the halfway point, Arwyn Thomas/Iwan Davies, dropped over a minute to their rivals soon after the restart, but held on to the runner up spot at the end. Gwilym Davies/Steffan Davies were third overall and secured a convincing victory of almost two minutes in the Novice Class. Chris Stanfield/Sarah Edwards had held third at Petrol, but retired in the second half after a brake pipe burst on their Escort.