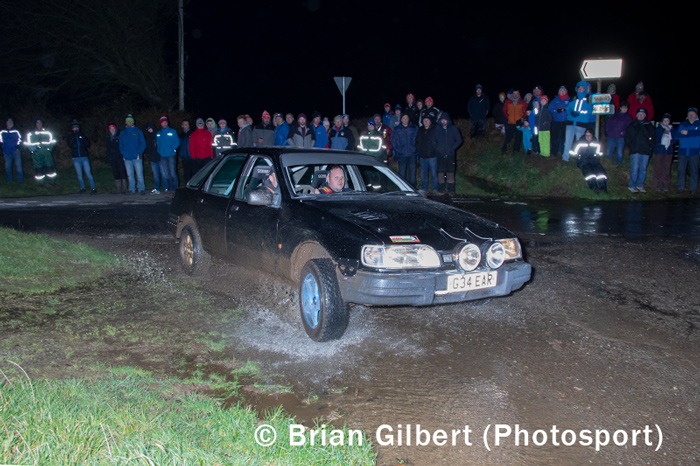 
Despite getting stuck on a white, Chris Hand/Dai Roberts managed to win a classic Rali Cilwendeg by just four seconds from Gethin Morgan/Max Freeman.

A maximum entry of 90 cars assembled at the Cattle Mart in Newcastle Emlyn ready to tackle a 100 mile route. Conditions were, in places, treacherous after the previous 24 hours of heavy rain. Thankfully the weather remained dry for the entire night, although there was a large amount of water on the roads, with a heavy fall of leaves making the going slippery.

Competition started just south of Newcastle Emlyn with an easy run up to the first intermediate timing point, more than half of which was on the B4333. TC1 to TC2 was tight, but, because it used private tracks, was timed to the minute. Most competitors made the second control within their minute, but significantly top seeds, Kevin Davies/Dale Bowen, missed the first code board of the night on a ‘Follow the arrows’ loop at 306¼363¾. Under the Cilwendeg regulations this added five minutes, rather than a fail, to their total. The pair had an unhappy night, after picking up a puncture in the second half, the 2018 winners ended up in seventeenth position at the end.

Car 2, Daniel ‘Lwni’ Jones/Gerwyn Barry, were an early retirement. Landing after a small jump on the first white, the car cut out and wouldn’t restart. The top runners were further thinned out when Car 3, Andy Davies/Michael Gilbey, withdrew with clutch failure on their Impreza.

TC2 to TC3, an intricate route to the east of Capel Iwan, was timed to the second. All the leading crews dropped time here, with John Davies/Eurig Davies fastest on 15 seconds, five seconds ahead of Gethin Morgan/Max Freeman, who had Chris Hand/Dai Roberts and George Williams/Cadog Davies one second behind. Unfortunately, the section had to be scrubbed after Car 50, Andrew Dawe/Andrew Lowe, rolled, blocking the road for the following cars.

An easy run to the end of the first section meant that most competitors arrived at the start of the second with clean sheets, however this was to change as SS2 to TC6 and TC6 to TC7 were both demanding and timed to the second. The section started directly south of Capel Iwan and ran across Pont Wedwst, turning left after the bridge, then looping around to Ty Mawr, Cwmcych and Penralltcych. Hand/Roberts were the only team to clean the two controls and now held a lead of nine seconds over Morgan/Freeman. Davies/Davies in their Astra were third, six seconds further back.

TC8 to SF2 had a ‘follow the arrows’ run through Coedllwyd. Hand/Roberts dropped three seconds here, but were still fastest and extended their lead to 18 seconds. Davies/Davies took second from Morgan/Freeman, the two crews now being separated by three seconds. Martin Curzon/Alan James were fourth on 36 seconds, 25 seconds in front of Williams/Davies.

The third section ended after a run around Fynone Park and again saw all cars drop time. Morgan/Freeman were fastest and cut their deficit to Hand/Roberts to 12 seconds. Davies/Davies were now 32 seconds off the lead. With both the short fourth and fifth sections cleaned by most crews these were the lead positions at the petrol halt, which was taken at Tan-y-groes.

Significantly for the Welsh Championship, Mark Lennox/Ian Beamond, hot favourites for the series win, retired at this point - their Escorted sheared a set of wheel nuts. This gave their nearest rivals an opportunity to close the gap at the head of the championship table. However, after the Cilwendeg, with two rounds remaining, only Kevin ‘Penclawd’ Jones can deny Lennox the drivers’ title, but to do so he must score the maximum 100 points on both the Powys Lanes and Eagle. Similarly, Dafydd Evans and Jamie Mills still have a mathematical chance of taking the title from Beamond.

Ioan Lloyd, son of West Wales Rally Spares owner and three-time Cilwendeg winner, Gareth Lloyd, passed his driving test the day before the event and was therefore able to start the rally of Saturday night. Ioan had competed in the F1000 Junior Stage Championship over the last two years, but this was his first road rally. He, and navigator Dylan Evans, reached Petrol in sixteenth place overall, leading the Semi-Expert/Novice Class. Their rally was spoilt after they drowned out in a ford and lost four minutes soon after the restart. They still managed to secure a third in class award, finishing 32nd place.

The route after the halfway halt was the traditional Cilwendeg mix of tight and twisty lanes, demanding concentration from both crew members. Sections 6 and 7 used the roads between the main A487 and the coast, including the Cwmtydu hairpins. By SF6 at Nantypele Morgan/Freeman had taken the lead and were five seconds ahead of Hand/Roberts. Things were to get worse for the latter pair as they managed to spin and wedge their Sierra across a track on the seventh section. Their predicament was to their advantage as the incident blocked the road for the ten or so cars behind them and, at the Finish, the organiser decided that it would be fairer to scrub penalties at SF7.

The decision on who would win the 2019 Cilwendeg was made at the final time control of the night, which was preceded by a two mile run past Capel Gwnda. Morgan/Roberts were the fastest crew over the section, nine seconds ahead of Morgan/Freeman, giving them a victory margin of four seconds. John Davies/Eurig Davies were third, 50 seconds off the lead, but only three ahead of fourth placed George Williams/Cadog Davies.

Paul Morgan/Jamie Mills won Class 2 (Experts), finishing in seventh place overall, three minutes ahead of their nearest class rivals. Class 3 (Semi-Experts & Novices) was a tighter contest, with Rhidian Daniels/Tomos Whittle and Gethin James/John Allen being tied for the category lead at the end of the penultimate section. Daniels/Whittle took first place after being sixteen seconds faster to SF8.