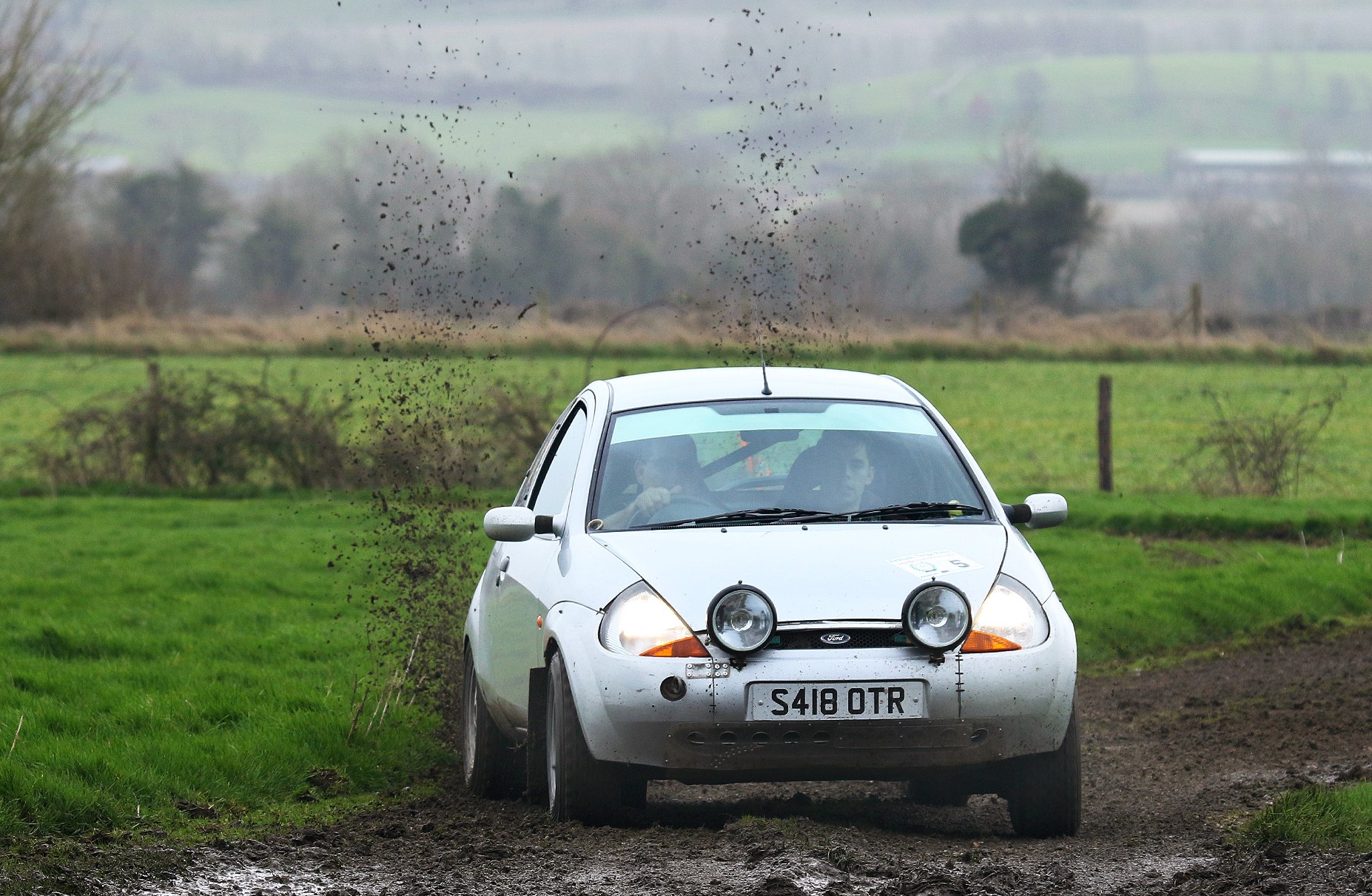 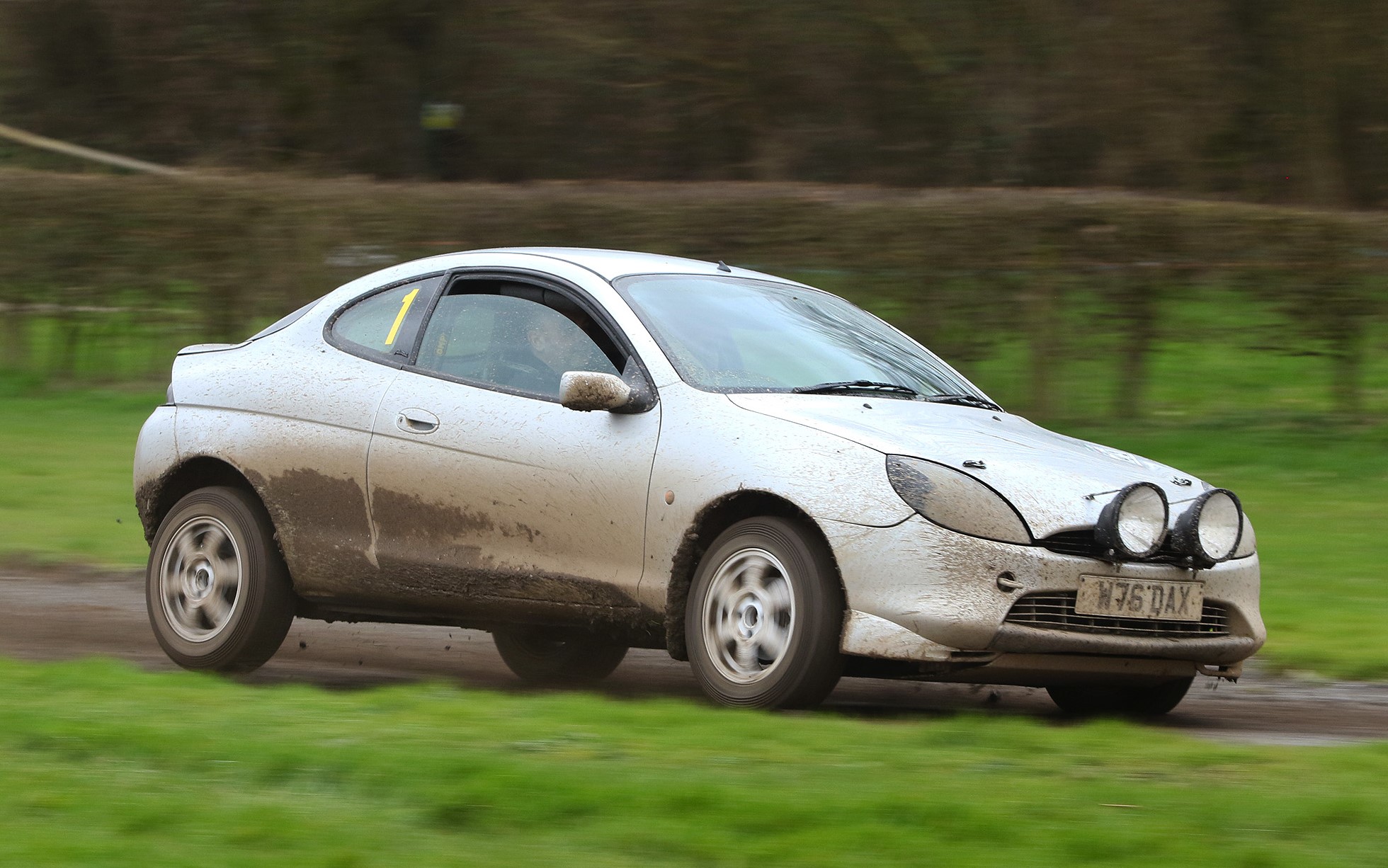 
For the 2020 edition of their popular Targa Rally, Bath Motor Club had secured the use of both Keevil Airfield and Castle Combe Race Circuit. These additions meant that competition could commence at lunch time. Previously, when the meat of the event was made up of woods frequented by walkers, the start had to be delayed until darkness fell and ramblers went home. This year crews faced 19 tests; those in the first half were mainly on solid surfaces, while the latter tests were on, at times, extremely slippery woodland tracks.

The club had received 87 entries, but a large number of late withdrawals saw only 62 crews take the start. The rally was actually two events: A Closed to Club rally and an Inter Club status event, the latter being what until the beginning of 2020 had been a National B rally.

With last year’s winning driver being absent on mechanic duties on the New Zealand Classic, the cars were led away by John Davies, who had Nick Bloxham alongside him; Nick being a late call up after John’s intended navigator, Eurig Davies, was unable to attend. They were followed by Gavin Rogers/Georgina Clark in the Escort ‘FLY’ at Number 2, with the MG ZR of Mark Slatcher/Paul Nelson at 3. The Clubman entry was headed by the Preston Rally winning Ford Ka of Keith Lane/Martin Lane at Number 5.

Test 1 was a complex 2.12 mile affair at Keevil. The test included three loops, a longer out one, a shorter inner one and then a repeat of the longer first loop to finish. Davies/Bloxham made a major error here, missing the third loop. This mistake meant that they missed two PCs, leaving them over two minutes off the lead with eighteen tests to go. Rogers/Clark were fastest on the test, immediately taking a lead of 13 seconds over Slatcher/Nelson. Lane/Lane tied on time with the latter crew and led the Clubman Rally. They were five seconds ahead of Gary White/Bradley White.

Car 4, James Newbould/Lizzie Pope and Car 10, Iain Freestone/Nick Kennedy, also missed the shorter inner loop on this test, missing one PC. Neither of these crews made it further than the rally’s halfway point. Newbould/Pope recovered to sit in eighth place at Test 8, but retired at MTC2 with oil pressure problems on their Vauxhall Corsa. Freestone/Kennedy had a driveshaft fail on Test 9, just after the petrol halt.

The second test was at Halfway Farm, between Melksham and Laycock. This was a short half mile test, with a tight start through the farmyard. Lane/Lane took advantage of their Ford Ka’s nimbleness to take fastest time by two seconds. Davies/Bloxham were next up, just a second ahead of Rogers/Clark. The latter were now held a 15 second lead, with Slatcher/Nelson in second five seconds ahead of Damien Rigden/James Crook. In the Clubman Rally, Lane/Lane also had a 15 second lead. Car 48, Andrew Hankey/Nathan Coles, had been ninth fastest on Test 1, but picked up a wrong test at Halfway Farm.

Crew then moved on for two tests at Castle Combe. Test 3 used the paddock area, plus the start/finish straight, a total distance of three-quarters of a mile. Test 4 used most of the circuit as well as some side roads; it was 3.6 miles in length. The two tests were then repeated. Rogers/Clark extended their lead by just two seconds. Slatcher/Nelson, who were fastest on Test 7, kept the Escort in sight and the gap between the top crews to 17 seconds by the time that they left the circuit. Notably, Davies/Bloxham, were fastest on three of the Castle Combe tests. They were now recovering from the Test 1 misdemeanour, and held ninth place. By this point one of the pre-event favourites, Mick Valentine/Peter Scott, had retired their Escort.

In the Clubman Rally, White/White had gained back a second on Test 3, but then Lane/Lane were fastest in the Category for the remaining three tests at Combe and led by 28 seconds as crews headed for Test 7, a repeat visit to Halfway Farm. Once again, Lane/Lane were the fastest of all crews here, four seconds ahead of White/White. Newbould/Pope, in a last hurrah prior to their retirement, took the best time in the Inter Club event. Davies/Bloxham and Slatcher/Nelson were one second behind, with leaders Rogers/Clark another second back.

Test 8 was a return to Keevil for a re-run of Test 1. Davies/Bloxham made amends for the Test 1 mistake by taking fastest time by eleven seconds. This brought them to fourth overall in the Inter Club Rally. Rogers/Clark were second fastest and headed for the Warminster petrol halt with a lead of 21 seconds. Slatcher/Nelson were still second, with Huw Morris/Alan ‘Bonzo’ Williams third, they weren’t to get much further, retiring soon after the break. In the Clubman event, Lane/Lane had been fastest in their category on seven of the first eight tests and now led White/White by 46 seconds. They were third in the combined standings when both the Inter Club and Clubman rallies were compared.

The event changed in character after Petrol and darkness fell; the tests were now almost entirely on loose surface. This suited John Davies, who is renowned for his speed on rough going. He and Nick Bloxham took fastest times on the next three tests; only being bettered by the two top Clubman crews on Test 11. The three tests in this section were at Buckler’s Plantation (1.36 miles), Southleigh (2.66 miles) and Keysley Farm (1.31 miles).

Rogers/Clark extended their lead over these three tests; they were 1 minute 13 seconds ahead of Slatcher/Nelson by the time that crews reached a noise check and a second petrol halt at Willoughby Hedge. Slatcher/Nelson now had Davies/Bloxham breathing down their neck, only seven seconds behind. The last minute pairing of Ethan Davies/Ryan Swain were setting top five times on most tests and were in fourth. James Griffiths/Matt Venables had had a trying event and withdrew at this point with a steering fault on their Puma.

Lane/Lane now led the Clubman Rally by 44 seconds. White/White were the fastest of any crew over Test 11 and still held second. George Newman/Jonathan Crook had missed a loop, which had a PC on it, on Test 8, but in the forests, they started to put in some competitive times and were third, but were four minutes behind White/White.

After the break, the action moved to the woods north of Bourton. Tests 12 and 13 shared a common finish but started at either end of Castle Wood. The first was 1.6 miles, the second 2.07. By the end of the two tests Davies/Bloxham had passed Slatcher/Nelson and were now 1 minute 18 seconds behind Rogers/Clarke. Lane/Lane continued to edge out their lead in the Clubman Rally; they were 43 seconds ahead of White/White after Test 13.

Tests 14 (The Convent, 2.4 miles) and 15 (Alfred’s Tower, 3.19 miles), like the previous two, had a common finish, but different start locations. John Davies was fastest on both and had cut Gavin Rogers’ lead to almost exactly a minute at the end of them. Davies/Swain tied with Davies for fastest time on Test 14 and were second fastest on Test 15; this moved them closer to Slatcher/Nelson in the battle for third place. Lane/Lane and White/White traded times and left the two tests with the same gap as they entered them.

Test 16 was the shortest of the event at 0.48 miles and was at Witham Hall. It was a blast down the drive, with a cone section in the middle. There was a three way tie for fastest time, inevitably Davies/Bloxham were one of these; Lane/Lane and Slatcher/Nelson were the other two.

Frome Showground was the venue for Test 17. This was a 1.1 mile test, with one loop; only one car got caught out by the loop. Lane/Lane were fastest of all and extended their lead to almost a minute. Davies/Bloxham were next up, with Davies/Swain third.

The tracks of Brambles Farm Wood, to the west of Longleat House, hosted what proved to be a dramatic penultimate test. It was 2.8 miles in length and it saw the demise of the rally leaders, Gavin Rogers/Georgina Clark. Their Escort grinding to a halt with a failing clutch. After 30 minutes they managed to get going again, but missed the final test to ensure that they got to the Finish within their maximum lateness. They did this and were eventually classified in eighth place, which allowed them to win the award for the highest placed classic car.

John Davies/Nick Bloxham were second fastest through the test and moved into the lead. Davies/Swain took the fastest time and moved past Slatcher/Nelson into what was now second place.

The final test was at 2.77 mile through Hart Hill, next to the Longleat Holiday Village. Davies/Swain were the quickest through and confirmed their position as runners up. Davies/Bloxham and Lane/Lane were two seconds behind and remarkably, after almost an hour and a half of rallying, these two crews ended on the same total and took first place in the Inter Club and Clubman rallies respectively.