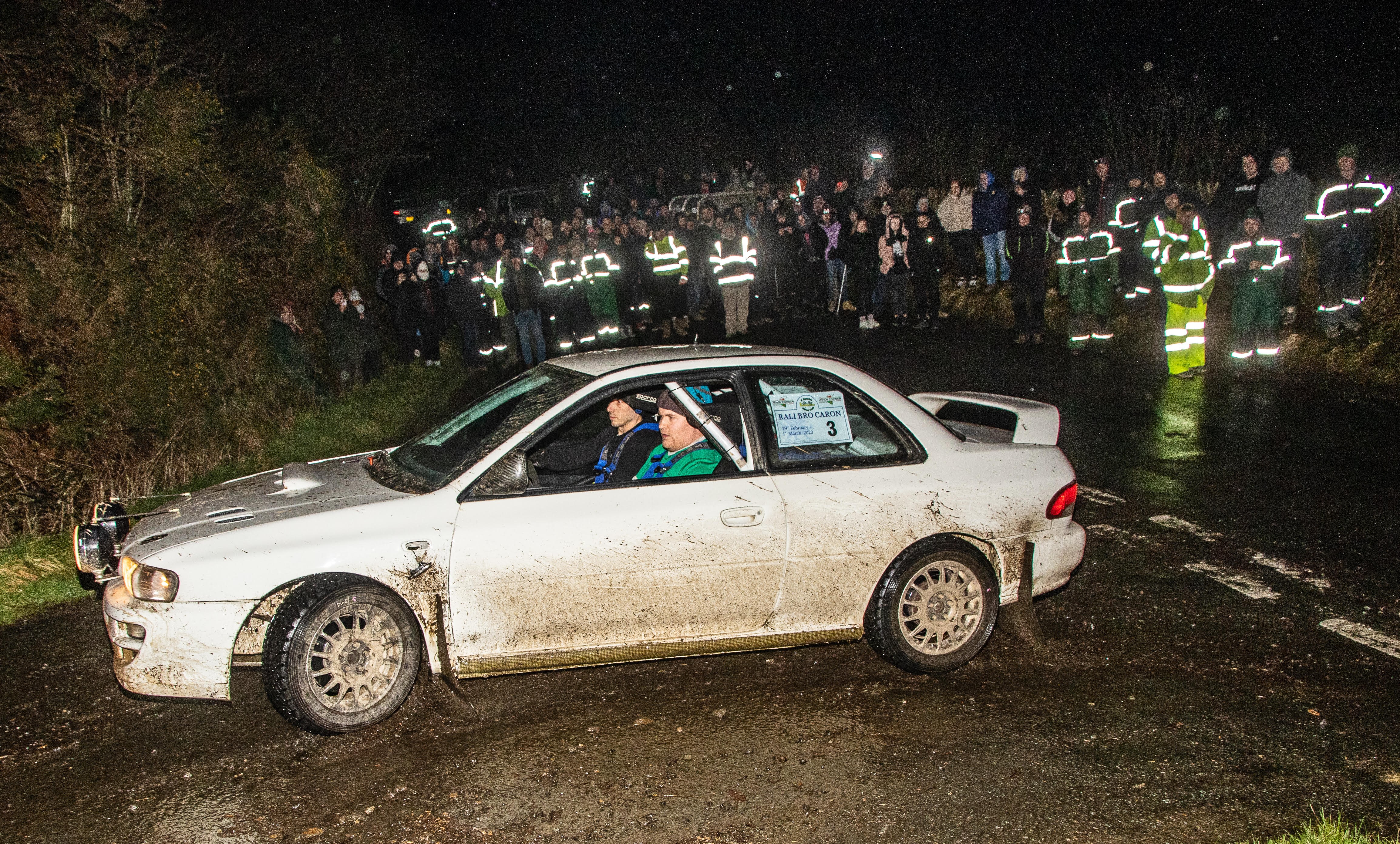 
The Rali Bro Caron, Round One of the 2020 Welsh Road Rally Championship, received almost 130 entries, however, even with a long reserve list, the event saw only 87 cars take the start, three fewer than the maximum allowed. The causes were a large number of withdrawals and only two of the reserve crews turning up on the night.

The organisers were given an additional headache on the day prior to the event when an objector caused a major reroute in the second half. This meant time and route cards having to be reprinted and an emasculation of the intended competition; a tricky section had to be replaced by a long non-comp.

Competition started just south of Cwmann, with the tricky not-as-map lane through 580462½ and the large lay-by on the A485, before the first TC at Capelstwr. TC3 was near Pencarreg, with TC4 at the entrance to Cae Mawr. The section ended at Tredomer, this part had two three metre controls at the junctions near Cwm Dawe. TC2 and TC4 were timed to the minute, while TC3 and SF5 were to the second. This led to the position were Kevin Davies/Alan James were fastest to TC3, just making their minute, dropping 59s; John Davies/Eurig Davies were on 1m 12s. This, however, meant that Davies/James now had 4m 01s to get to TC3, while Davies/Davies had 4m 48s. The result was that Davies/James failed to make their time and dropped a further minute, while Davies/Davies cleaned the section and took the lead.

Davies/James were quickest to SF5, but still trailed Davies/Davies by 23 seconds and were in third place, behind the Impreza of 2018 Bro Caron winners Andy Davies/Michael Gilbey, who were just seven seconds off the lead. This was despite their Impreza breaking a shaft. They were able to lock the axle and changed the damaged part in the following non-competitive section. Gilbey estimated that the drama had cost them 20 seconds.

Welsh Champions, Mark Lennox/Ian Beamond, were already out; they had been struggling with the steering on their Escort and when they picked up a puncture, they decided to throw in the towel. Bagger 20 winners, Matthew Jones/Richard ‘Tyson’ Morris were another crew who failed to make it to the petrol halt; their Astra suffering a broken wheel.

The white track leading down from TC3 to PC10 became increasingly rutted and a number of cars towards the end of the field got stuck in ruts, which in places were half a metre deep. These cars were pulled out by a spectating farmer with his tractor. This meant that most crews dropped no more than two minutes at TC4.

A run over Ffarmers opened the next section. A TC timed to the minute was cleaned by all but five cars, two of which were penalised for arriving early. There then followed a tight four minute to-the-second section to the east of Pumsaint. Davies/James were fastest once again, but carrying that extra minute penalty, were still in third. Davies/Davies led, but now had Davies/Gilbey just one second behind.

Chris Hand/Simon Jones had seemed to have the fastest time to SF8, but had failed to get two passage boards signed off and received two fails as a result.

The third section ran from near Hafod-tafolog in a loop back to Porthyrhyd, then through Aberbowlan, before a decisive run though the woods at Pencraig and finishing at Plas Bach. There were four TCs, three timed to the second. Once again, Davies/James were fastest to TC10 and moved to second place. They were now one second behind Davies/Gilbey who had grabbed the lead, with Davies/Davies falling to third, eight seconds off first place. The, at times, rough track through the forest saw the lead extended to a decisive margin; Davies/GIlbey emerged 34 seconds ahead of Davies/James, who were now six seconds ahead of Davies/Davies.

Petrol was taken at Llandovery, with a regroup to allow crews to get back on to their scheduled time. Davies/Gilbey now led by 27 seconds, with Davies/James in second, six seconds ahead of Davies/Davies. Gavin Edwards/Daniel Jones were in fourth, the only other crew within a minute of the lead. They were already struggling with the loss of some lighting and retired in the second half with electrical problems.

Dafydd Morgan/Kieran Price were the leading Expert crew in ninth place overall. They were holding an eight second class lead over Gari Evans/Richard Williams, however they were another crew who failed to make the Finish. Evans/Williams went on to win the class by two minutes. The Semi-Expert Class was led by Ioan Lloyd/Dylan Evans, the youngster already having a lead of over three minutes, this was extended to five minutes by the end of the rally.

There was a close battle between Steffen Evans/Connah Urquhart and Llyr Davies/Gareth Jones in the Novice class; they were separated by 11 seconds at Petrol. However, neither were to take the category win at the Finish; Elian Lewis/Ryan Jones were to come through from third at Petrol to first place at the end.

The second half opened with a short four minute section starting at 732½332½ and looping around to the outskirts of Llanwrda. It was to have a dramatic effect on the battle for the lead. Kevin Davies/Alan James picked up a puncture halfway through the section. The wheel came off the rim and, as they battled up a hill, they slipped into a ditch. They eventually got going, but had to cut out much of the remaining route. They took fastest time on the final section, but, from first place last year, they finished in last place and received the Wooden Spoon Award.

Andy Davies/Michael Gilbey saw their rival’s stranded Escort and eased off as the route headed back north towards Lampeter. Despite this approach they were still fastest on that section and were the only crew to clean the timed-to-the-minute TC18. Attention now moved to the battle for the runner up spot with George Williams/Aled Richards hunting down John Davies/Eurig Davies. The Escort crew cut the halfway deficit of almost a minute to just 14 seconds as the crews tackled the final section through Pentre’r-felin. This last section saw both crews finish with a penalty of 56 second, so Davies/Davies took the runner up spot 1m 50s behind the winners. Davies/Gilbey taking their second Bro Caron success in three years.

Mike Roberts/Dafydd-Sion Lloyd were fourth, 21 seconds ahead of Arwel Evans/Nick Bloxham, who were fifth. There were 56 finishers from 87 starters on a night that had been remarkably dry.