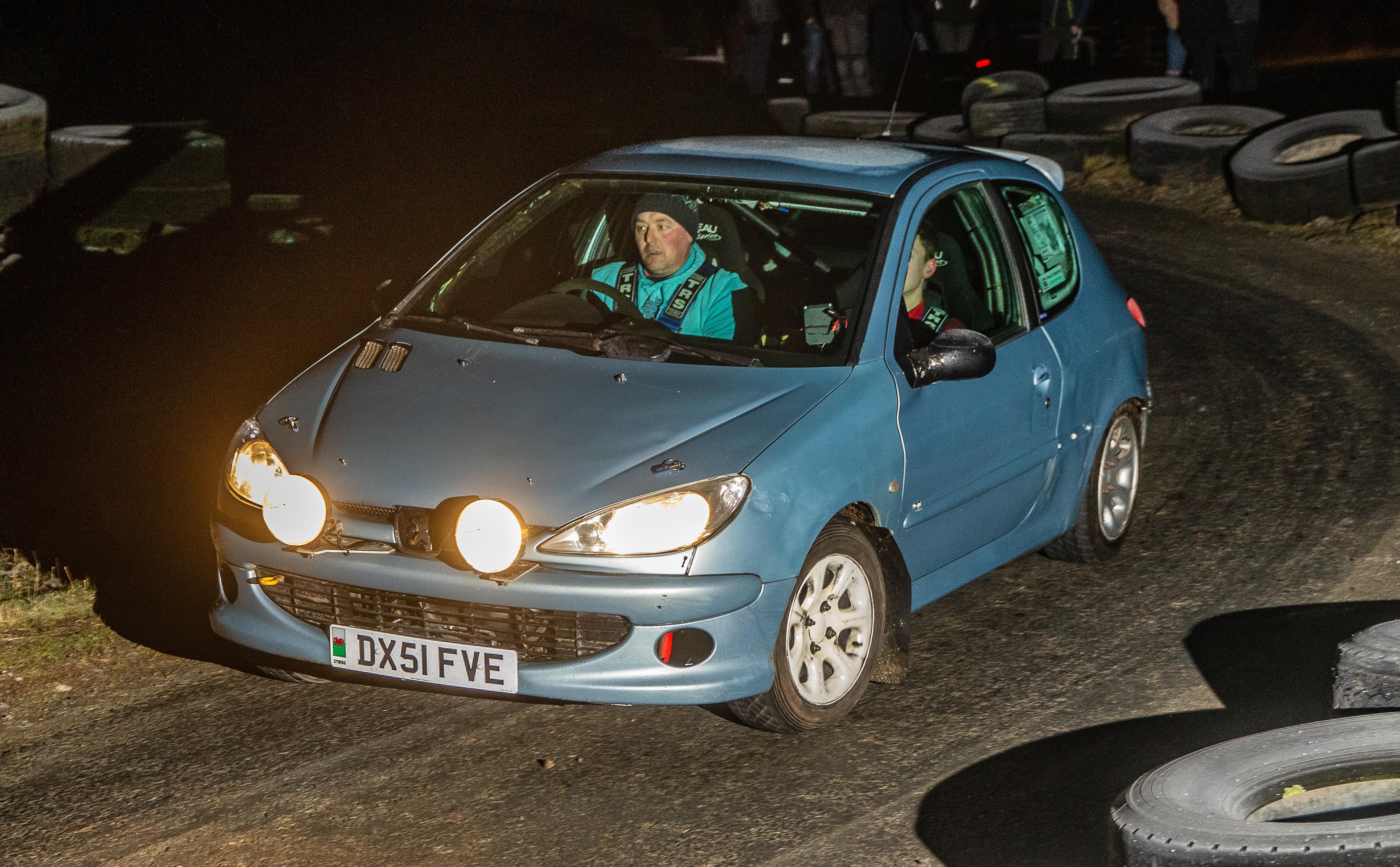 Clerk of the Course: David Owen


The father and son team of Huw and Owen Rowcliffe took a narrow victory on a short but dramatic Cambrian Road Rally.

The Welsh season opener attracted a capacity 60 car entry to the Pavilion at Pontrhydfendigaid on a night that promised to provide a severe challenge as a heavy frost gripped central Wales. Competition opened at 22:40 with crews making the short trip across the road to the Mid Wales Activity Centre for the test that opened competition. The test was one lap of the mountain circuit run in an anti-clockwise direction, with a tight section around cones in the paddock to finish.

With the heavy frost the roads were treacherous, however all 60 cars survived the test. Quickest was the Peugeot 206 of Dafydd Morgan/Dafydd-Sion Lloyd; they were the only crew to break the five minute barrier, finishing four seconds ahead of the similar car of Malcolm ‘Tar’ Jones/Dafydd Evans. Daniel Jones/Jenny Evans took their little Micra to third fastest, tying on time with Cerith Jones/Deian Rees.

After this brisk warm up crews moved to the plotting area, which was situated just outside Tregaron. This section was to have the most dramatic effect on the final overall results. The section was defined in the time schedule as a neutral, where any lost time could not be recovered. The test had a minimum time of three minutes, therefore crews who, for example, finished the test in a time over five minutes, which most had, would be two minutes behind their scheduled time at the end of it. The target time from the end of the test to the start of the road sections was 72 minutes. Crews should therefore have added this to the time at which they finished the test to give them their due time at MC2, which started the road section after the plotting break.

The top four crews misunderstood this and booked into MC2 at their scheduled time, that is, the Car 0 time plus their start number. This meant that they had only taken 70 minutes to complete the section and they were awarded two fails for booking in early. Gerwyn Barry, navigating in Car 5, was the first navigator to correctly interpret the regulation and booked in at his correct time, as did the remainder of the field.

All of the top four crews completed the route and, without the fails Malcolm ‘Tar’ Jones/Dafydd Evans would have won, with Cerith Jones/Deian Rees second. However, their fails demoted them to 32nd and 33rd at the Finish.

The road part of the rally opened with a two mile/four minute section which ran from Penllwynbedw to Rhyd-y-Pandy. The fastest crews cleaned this although both the eventual winners, Rowcliffe/Rowcliffe, and second placed crew, Daniel Jones/Jenny Evans, dropped ten seconds. This was an indication of the tight battle that these two fought throughout the night. They eventually finished separated by one second.

The next section was the meat of the rally; a 34 mile non-stop affair, with a number of time controls, three timed to the second. It started with some easy lanes to the east of the Tregaron to Bronnant main road. Things tightened up as the route moved towards the coast. Most crews dropped a minute or more at TC9, which was timed to the minute, and situated at Blaenpennal.

A number of leading crews had disappeared from the fray by this point. Early leaders, Dafydd Morgan/Dafydd-Sion Lloyd, did substantial damage to their Peugeot when they skied on ice and hit bank. Daniel Evans/Gareth Hughes had lost the exhaust on their Xsara and Barry Jones/Arfon Griffiths had been forced out when their Escort developed engine problems.

The first section timed to the second started at 581¼658, this used the bridal way to Pigyn Uchaf, it then ran through a couple of triangles at Garn Fach before a TC just before Rhydroser. All crews dropped time here. There was no time to relax before another two mile section timed to the second, which ran along the very twisty lane from Penfor fawr, crossing the B-road before finishing near Pentre-bach. Malcolm ‘Tar’ Jones/Dafydd Evans were the only ones to clean this. Steve Knibbs/Gerwyn Barry retired at this point with broken gear linkage on the Peugeot.

The long section ended with the tightest part of all through the Cnwc y Barcud. By the end of this the lead was held by the small but fast Corsa of Dafydd Jones/Gareth Parry. Unfortunately for them they were running low on fuel and had to miss out the final section to get to the Finish.

The final section took crews back toward Pontrhydfendigaid, running south from Dolfor to Brynarth. Once again Rowcliffe/Rowcliffe and Owens/Evans tied on the same penalty and so the father and son team beat the son and mother combination by one second. Jonathan Davies/Andrew Gaunt came in third almost a minute further back.