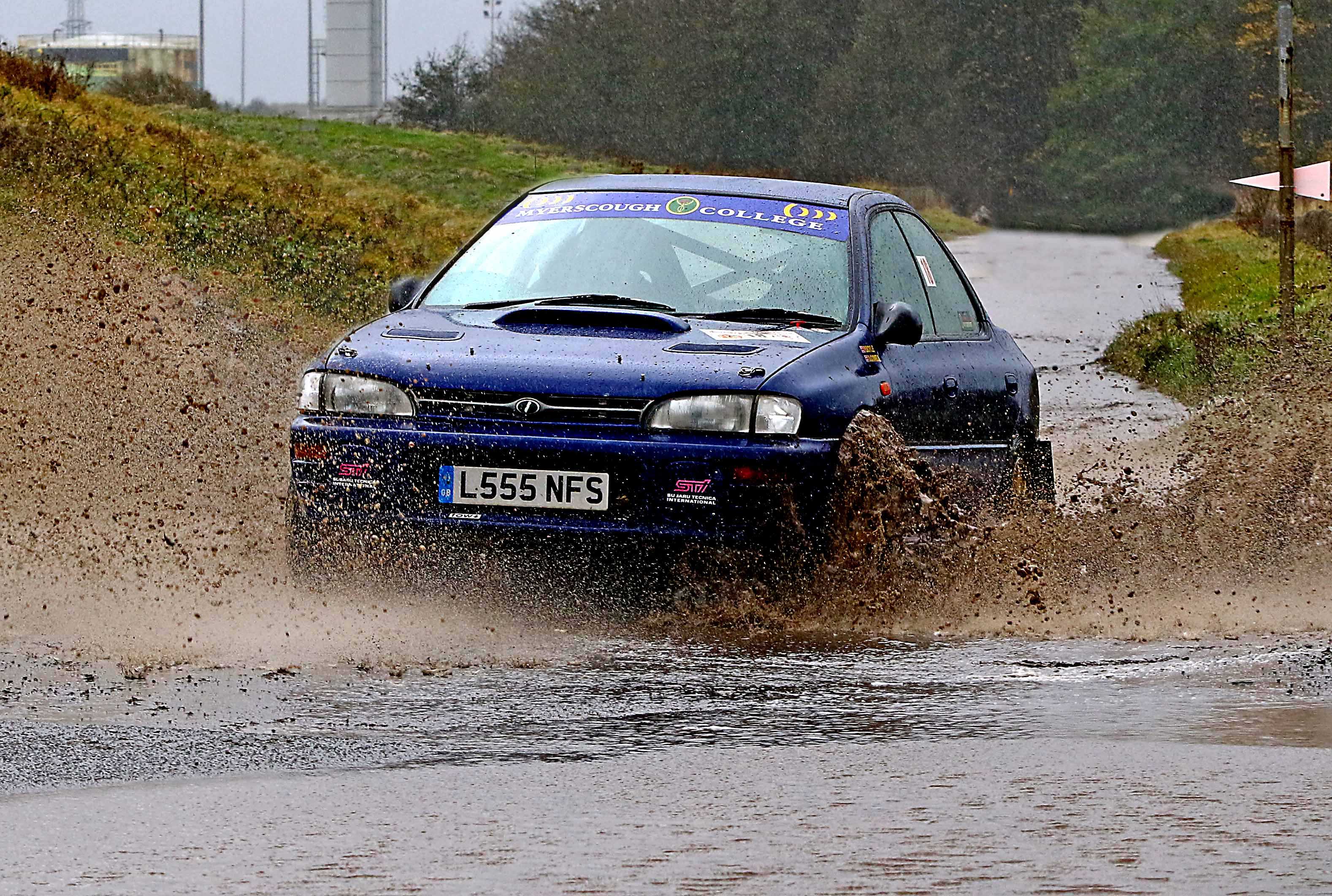 
Kirkby Lonsdale defied the CoVid-19 gloom and organised their second Devils Lockdown of the year. Following the success of their first post-Lockdown event, a single venue autotest at the Rowrah Kart Circuit in July, the club designed a multi-venue targa rally for Halloween.

The ex-MoD arms dump at Broughton Moor was the centre of proceedings, but there were also tests at Workington Speedway Track and Maryport Business Park. The rally was based at the Cockermouth Auction Mart; a venue that allowed room for social distancing.

As if dealing with a pandemic wasn’t a sufficient challenge, the morning of the rally brough rain and wind of biblical proportions, as Storm Aiden battered Cumbria. The weather particularly affected the tracks at Broughton Moor; stretches became flooded and the roads became rough.

Fifty-eight crews took the start, although Car 55, Mark Gregory/Aidan Gregory, had to retire their Mini on the start line. The remaining crews reached Broughton Moor where they faced a ten mile regularity on the tracks of the ex-MoD base. There were seven timing points. The areas at the northern edge of the complex, around the middle of the section. were the worst affected by the weather.

Geoff Hall/Paul Bosdet in their Mini were amongst the fastest crews through the opening controls, but their car drowned out in the floods and they got no further. Also in trouble in the water were two of the older cars in the event; Jayne Wignall/Paul Wignall (Alfa Romeo Giulietta) and Robert McClean/Susan McClean (Rover P4), both had to cut some of the route.

Top seeds Steve Retchless/Sasha Hariot finished the section with least penalties; they had been fastest to the fifth timing point, dropping 29 seconds, while most other crews hit the maximum one minute penalty. Steve Head/Graham Raeburn were in second, just eight seconds behind and Paul Crosby/Andy Pullan were third, three seconds further back.

With very little time to relax, crews now tackled a short test at the Workington Speedway Track. The outer tarmac roads, rather than the cinder track, were used for a test, which had a 36 second bogey. The eventual winners, Danny Cowell/Phil Boyle, were fastest here. The pair had originally entered the event in a Talbot Samba, but switched to a Subaru Impreza before the off. They had been in eleventh place after the regularity, having taken a one minute maximum at the very wet TP 1.5, but, thanks to their fastest time on Test 1, now moved to sixth. At the front of the field, Head/Raeburn were eight seconds faster on the test than Retchless/Heriot and so the two crews were level on penalties; Retchless retained the lead as the best time on the regularity section was the event’s tie decider.

The test saw the demise of Howard Warren/Iain Tullie. They had been in sixth place after the regularity, but their Porsche then succumbed to suspension failure.

The third venue to be used was the Maryport Business Park, which hosted Test 2 and, later on Test 8. This was a slightly complex up-and-down-the-19-cones test, however only six wrong tests were recorded and all these in the latter third of the field. Paul Crosby/Andy Pullan, experts at this type of trial, beat the one minute bogey by four seconds. This allowed them to move into a 19 second lead over Head/Raeburn; Retchless/Heriot, in third, were now 32 seconds off the lead.

An hour’s lunch halt was taken back at Cockermouth. The weather had caused set up problems during the early sections and everything was running 30 minutes behind schedule. The schedule was adjusted and proceedings remained on track after the break. The weather also improved during the afternoon to make the marshals’ lives easier.

The first four tests after Lunch were back at Broughton Moor. Test 3 saw a change in the lead as Paul Crosby/Andy Pullan suffered a broken gearbox on their Porsche and went no further. Head/Raeburn now hit the front, they and Retchless/Heriot matched each other on the test and remained separated by 13 seconds. Cowell/Boyle were fastest on Test 3 and moved up to fourth overall, just behind the Chrysler Galant of Owen Turner/Matt Fowle.

The top positions remained the same after Test 4, where Mick Valentine/John Thornley (Ford Escort) were quickest; this moved them up two places to sixth overall. Fastest on Test 5 was the Toyota MR2 of Kevin Stones/Chris Holden. Having cut his teeth in a Hillman Imp in the late 1970s, Stones was a leading national rally driver of the 1980s. He was one of the fastest contenders in the Talbot Sunbeam Ti and Skoda Challenges of that era. He took an outright win on the 1986 National Breakdown Trophy Rally in a Skoda 1.3. He was making a rallying return on the Devils Lockdown, unfortunately he wasn’t to make the finish as engine problems stopped the MR2.

The leaders, Head/Raeburn, struggled on Test 5 and lost 16 seconds and the lead to Retchless. Head had further, more serious problems on the following test when a starter motor wire snapped and the car cut out; he took a test maximum and was out of the running for an overall placing.

Cowell/Boyle made the best of the Impreza’s superior traction and took fastest time on Test 6, which used the soggiest part of Broughton Moor. They were now in second place, only three seconds behind Retchless/Heriot.

Cowell was three seconds faster than Retchless on Test 7, the second visit to Workington Speedway. They were level on time, but, once again, Retchless/Heriot retained their lead thanks to being best time over the opening regularity. However, Cowell was not to be denied and moved into first place on Test 8, the rally’s final visit to Maryport Business Park.

The battle for the win continued through the final leg of the rally, which consisted of three further tests at Broughton Moor and one more visit to Workington Speedway. Cowell pulled out three more seconds on Retchless on Test 9. Then, on Test 10, Retchless took fastest time, seven seconds faster than Cowell, and the two crews were equal once again and Retchless, courtesy of the tie-breaker, was back in first place.

On Test 11, the final one at Broughton, Cowell once again asserted himself, taking fastest time and the lead. He then was one second quicker on the final test, to come home with a winning margin of nine seconds. Mick Valentine/John Thornley finished in third, almost a minute down on the winners. In contrast, there was a tight scrap for fourth place with Louis Baines/Jonny Baines (Peugeot 106) beating the father and daughter pairing of Michael Pedley/Ciara Pedley (Ford Escort RS2000) by just one second. Owen Turner/Matt Fowle were three seconds further back to round off the top six.