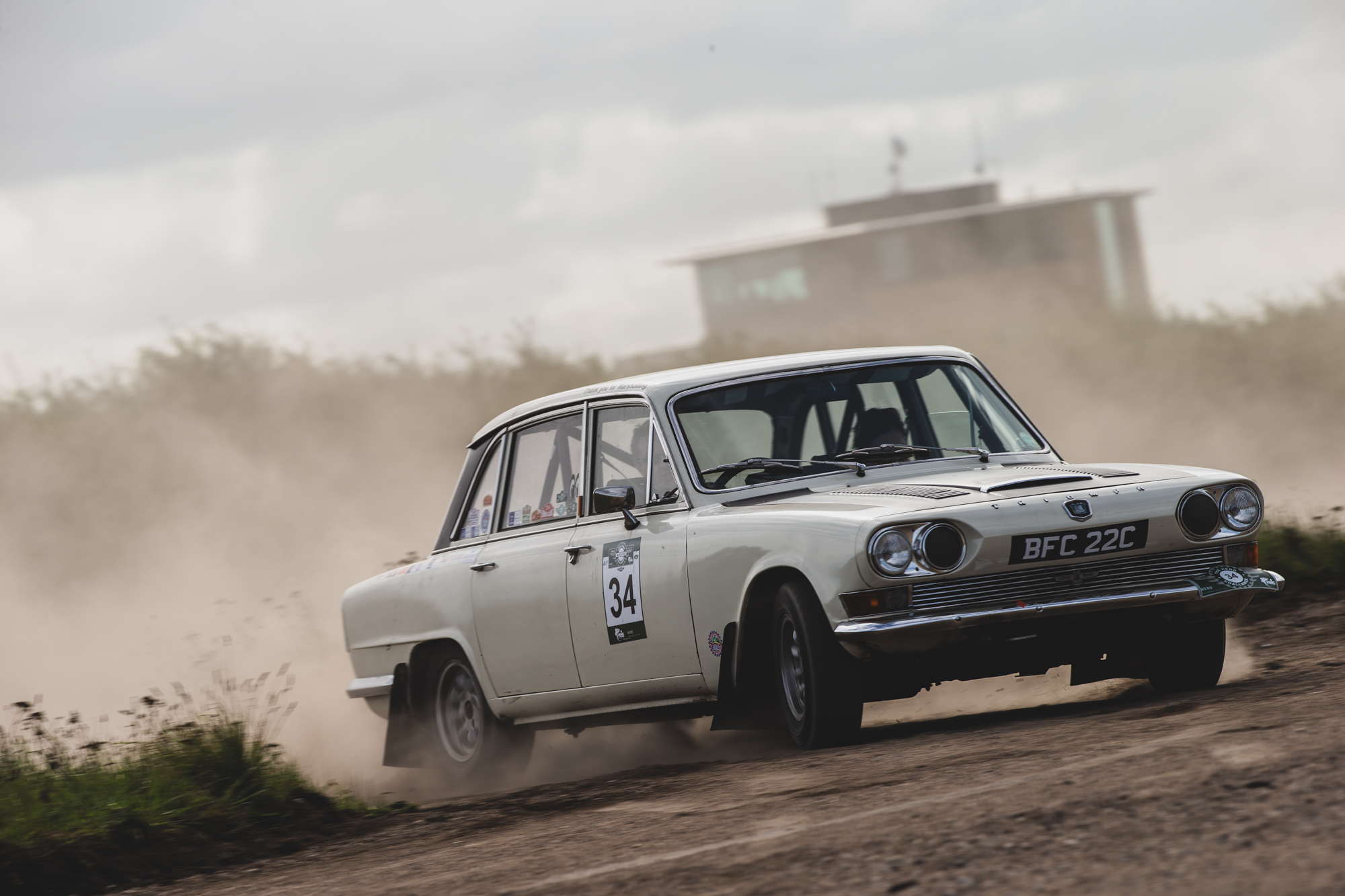 
Ninety-two crews took the start at the Bicester Heritage Centre for the HERO Challenge Two. Competitors immediately went into three tests at the adjoining airfield. The penultimate car away, Alan Wakeman/Matt Fowle were fastest by one second from Thomas Bricknell/Roger Bricknell. These two crews were amongst six to beat the bogey on the next test, then the Bricknells were clear winners on the final of the opening set of tests.

With the class improvement scoring system being used, where the fastest in a class is penalised 0 penalties, there was a four way tie for the lead as cars headed for the first regularity; these crews were all on zero penalties having been fastest in their class on all three tests. As well as Wakeman/Fowle, Darren Everritt/Susan Dixon, Angus Watt/Fynn Watt and Tim Sawyer/Kit Headley shared the lead. The Bricknells led the Masters Class; competitors in this class weren’t eligible for overall positions.

The opening regularity headed North from Bicester and, after five timing points, finished just outside Brackley. Thomas Bricknell/Roger Bricknell picked up their first penalty at the second control, when they were one second early; they were a second late at the following timing point, but that was their total for the section. Their performance was matched by 14 year old Oli Waldock, who was navigating for his grandfather, 2018 HERO Cup Winner, Paul Bloxidge. They had finished third on the HERO Novice Trial two weeks previously and put the knowledge and confidence gained there to good effect. After the Reg they were level in second place with Alan Wakeman/Matt Fowle; both these crews were one second behind the Triumph 2000 of Darren Everritt/Susan Dixon.

The final two tests of the event were next. These were on the gravel at Turweston Airfield, the home of the Bill Gwynne Rally School. Alan Wakeman was fastest on the first of these and second on the final one. These performances gave him the Test Pilot Award for the event; this is awarded to the driver with the fastest total time for all tests. The tests made little difference to the leader board; the top three crews remained the same, still separated by one second.

The final test produced a number of wrong tests as crews failed to follow the two long slaloms correctly. Most significantly Chris Chapman/David Broome were amongst the miscreants who picked up the resultant 30 second penalty; this dropped them to 40th position. They were to recover to 11th at the Finish as David picked up the Clock Watchers Award for the least penalties picked up on the rally’s six regularities. He also won the Newcomer Driver Award for the highest placed driver who was doing their first HERO event.

There were two further regularities before the lunch halt at the British Motor Museum, Gaydon. This part of the route took competitors around the North of Banbury. Both of these regularities had four timing points each. After Regularity 2 Wakeman/Fowle had taken the lead and were two seconds ahead of Everritt/Dixon, Bloxidge/Waldock a further second behind. These three crews were well clear of the rest of the field, which was led by the Bentley Derby Special of Elliott Dale/Charlotte Ryalll.

By the lunch halt Everitt/Dixon were back in front on a total of 23 seconds, one second ahead of Wakeman/Fowle, who in turn, were one second ahead of Bloxidge/Waldock. There was a tight battle for the lead in Class 7 (Category 3 cars), where Rod Hanson/Clare Grove (Ford Escort) and Angus McQueen/Mike Cochrane (BMW 323i) were tied on 43 seconds. By this point Anthony Cohen/Robert Cohen (Triumph TR5) and Marie Ashford/Brett Ashford (MG B GT) had retired.

In the Masters Class Thomas Bricknell/Roger Bricknell had a clear lead of 20 seconds over Stephen Owens/Nick Bloxham, with the Bentley Derby 4¼ of Stuart Anderson/Emily Anderson in third. The latter crew were to fall down the order after a error saw them pick up a minute penalty on the first regularity after the lunch halt.

Regularity 4 was the longest of the event, with six timing points, and snaked its way to the west and south-west of Banbury. It produced a shake up in the lead as Paul Bloxidge/Oli Waldock put in the best performance and emerged with a ‘massive’ lead of four seconds over Alan Wakeman/Matt Fowle, while Darren Everritt/Susan Dixon were 8 seconds late at the final control; they dropped to third as a result. Meanwhile Rod Hanson/Clare Grove initially missed a slot and were 31 seconds late at the next timing point. They dropped to tenth and gave McQueen/Cochrane a clear lead in Class 7.

Regularity Five skirted the Wychwood Forest and contained four timing points. Bloxidge/Waldock were a little to quick over the test and picked early penalties at all four controls; they dropped behind Wakeman/Fowle on the leader board and had Everritt/Dixon just one second behind. Elliott Dale/Charlotte Ryall were still in fourth, they led the Volvo Amazon of Damon Green/Sean McGuire by six seconds.

The final regularity was the shortest of the rally, with three timing points, but it would have a massive affect on the overall results. It started in the lanes around Beckley and finished near Horton-cum-Studley. The section was a Jogularity, but although the tulip diagrams had balls to indicate the starting point, they didn’t have arrows to indicate the direction of departure, instead there were descriptions. Matt Fowle managed to confuse himself with the result that he and Alan Wakeman were over a minute late at the first timing point. This dropped to tenth place in the final standings as a result.

Everritt/Dixon were three seconds early at TP 6A, but Bloxidge/Waldock were five seconds late; this gave the Triumph crew the lead. They maintained their advantage through to the Finish and secured their first overall win. Bloxidge/Waldock held on for second place, ten seconds down. With Wakeman/Fowle falling out down the order, Elliott Dale/Charlotte Ryall were given a 10 second line fault at the critical TP 6A, this, along with fewer time penalties, pushed Damon Green/Sean McGuire on to the final podium position.

The experienced Paul Wignall had his nephew, Andrew Neate, navigating for him. They came home in fifth place, giving Andrew the Newcomer Navigator Award.

The son and father team of Thomas Bricknell/Roger Bricknell won the Masters Class and finished the rally with the least penalties of any of the participants.