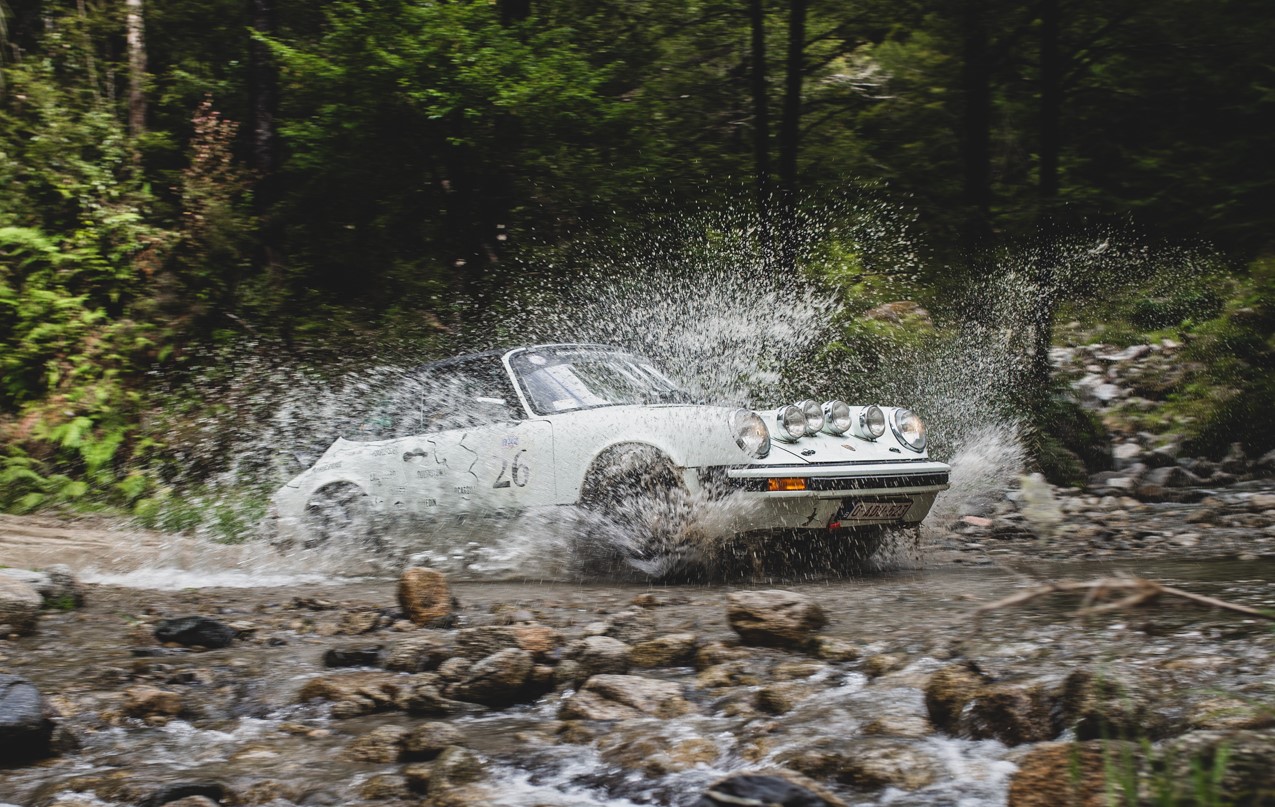 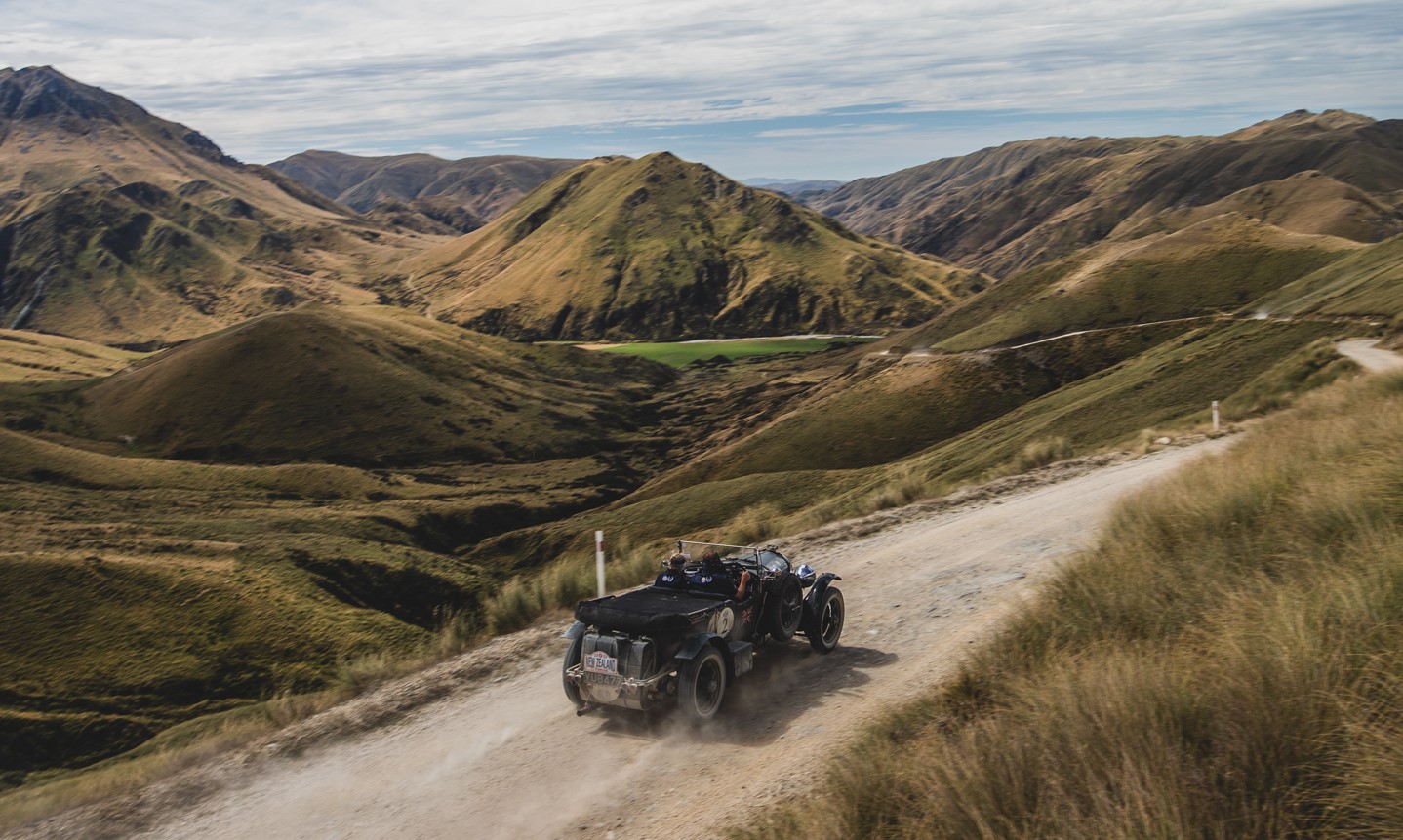 
Twenty-six crews arrived in Auckland to contest the 7,000km New Zealand Classic, the first running of the event. Ahead, over 23 days, lay 52 regularities, mostly on gravel roads, and six tests. The route went as far north as 90 Mile Beach at the top of North Island and as far south as Invercargill at the southern edge of South Island.

The first three days formed a loop, starting and finishing in Auckland, taking crews to the northernmost point of the country, with overnight halts at Whangarei and Russell. Day One included a regularity over the Waikiekie World Rally Championship stage. Amin Hwaidak/Jens Jarzombek in their Ford Mustang led for the first two days, but penalties were small at this stage; the leaders were on 12 seconds, with Filip Engelen/Ann Gillis were just two seconds behind.

Day Three, a run back south to Auckland, included the first test of the event, two laps of the Whangarei Kart Track. Sherif Hwaidak/Yevhen Harashchenko were fastest by four seconds; they went on to take best times on all of the event’s six tests. Filip Engelen/Ann Gillis were second fastest and by the end of the day had taken the lead, having been best over the day’s three regularities. Michael Harrison/Lorna Harrison were in second in their Volvo PV544.

Notable spectators on this day were Noel Edmonds and his wife, who had recently moved to New Zealand. After their exploits on the BBC’s Eight Go Rallying they had hoped to do the event, but hadn’t quite had time to get things organised alongside their house move.

In trouble on the return to Auckland was the Talbot 65/76 of Peter Gordon/Griselda Gordon, it broke its differential, it could go no further. The enterprising duo didn’t give up, they sourced an MGB GT and returned to the fray on Day Five.

Day Four opened with a test at Hampton Down Karting. It had a test minimum of 1m 40s, this was matched by Sherif Hwaidak/Yevhen Harashchenko; this allowed them to move up to second place, ending the day 17 seconds ahead of Michael Harrison/Lorna Harrison. Filip Engelen/Ann Gillis were six seconds behind Hwaidak on the test, but arrived at the overnight halt at Rotorua with a 20 second lead. These top three positions were to remain the same until Day 20. The day crossed the centre of North Island; the morning saw crews travel the Whaanga Coast road, another stage from the WRC, while the afternoon had taken competitors through The Shire and Hobbiton, locations for Lord of the Rings trilogy of films.

Day Five included two regularities through Colin McRae favourite stage, Motu River. Hwaidak/Haraschschenko narrowed the gap on Engelen/Gillis by five seconds. Harrison/Harrison were still third but had survived a problem when their Volvo’s gearstick broke; this was fixed by the sweeps. Martin Hunt/Olivia Hunt were leading the Vintage Catgeory in their Bentley 4½ Open Tourer, as they had done since Day Two. They were now eight overall in the combined classification.

After the overnight halt in Gisborne, crews tackled three regularities, before finishing the day with two tests at the Bruce McLaren Motorsport Park at Taupo. Penalties at one regularity timing point had to be scrubbed after the latter half of the field got delay but a very large flock of sheep being shepherded across the road. Hwaidak/Haraschschenko were once again fastest on both tests and narrowed the gap to the leaders to seven seconds by the day end. Stephen Hardwick/Samantha Hardwick climbed up to fifth, 29 seconds behind Adrian Hodgson/Mark Bramall, who had held fourth position since Day One.

After a rest day, Days 8 to 10 took crews to Wellington and the end of North Island section of the rally. The route included passing the Mount Ngauruhoe volcano, Mount Doom from the Lord of the Rings films. Positions were generally static, although the battle for the lead was tight. Hwaidak/Haraschschenko closed the gap on Engelen/Gillis to four seconds at the end of Day 8, but they were separated by 15 seconds by the time that they arrived in Wellington. Jeff Urbina/Chris Pike dropped out of the top ten after a wrong slot on the first regularity of Day 10.

There was no competition on Day 11 as competitors took the ferry across the Cook Strait to Picton in the South Island. Day 12 caused a major head ache for the organisers as reports from the 48 hour car had alerted them to the fact that the Molesworth Station Road, a major part of that day’s route, was closed due to fire risk. A new route was devised, including a new regularity, and crews made their way to Hanmer Springs, without interruption to the competition.

The Porsche 912 of Peter Morton/Louise Morton had struggled with engine problems for several days, but on Day 12 they swapped their vehicle for a BMW 2002Ti, this was supplied by New Zealand rallyist Mike Donald, who was also marshalling on the rally.

Engelen/Gillis dropped just two seconds over the three regularities of Day 13; they extended their lead to 21 seconds. Fourth placed Hodgson/Bramall had a strut break on the Peugeot 504Ti, but didn’t lose any time and got the part replaced locally. The crew also held second place in the Te Waipounamu Trophy; this was a competition for the best performance on the South Island, although the top two crews in each category weren’t eligible. After two days this competition was being led by Amin Hwaidak/Jens Jarzombek.

As the rally moved down the west coast, leaden skies and heavy rain greeted crews on Day 14. Engelen/Gillis eked out a further two second over Hwaidak/Haraschschenko, but then lost that advantage the following day, as Hwaidak/Haraschschenko made back the two seconds. There was a similar tense battle going on for third place, where Hodgson/Bramall were now within 20 seconds of Harrison/Harrison.

Day 16, which took crews from Fox Glacier to Queenstown, was a half day of competition. This allowed time for competitors to have a look around WRC driver Haydon Paddon’s Highland Motorsport Park and have a run at its circuit. There was just one regularity with very few penalties, however Hwaidak/Haraschschenko edged another second closer to the lead. This was of concern to Engelen/Gillis as there were two long tests on Day 19 and Hwaidak had been fastest on all the tests so far; it was vital for the Belgian pair to maintain a healthy buffer at the front.

Fourth placed Hodgson/Bramall had a fright when their Peugeot started to suffer from low oil pressure; the engine cutting out at one point. However, they made the timing point without losing time and maintained the 20 second gap to Harrison/Harrison in third. The source of the Peugeot’s problems was traced to a one way valve having been fitted the wrong way around when the car was serviced at Nelson.

After a rest day at Queenstown, battle was recommenced on Day 18, it was to prove decisive in the fight for the lead. Jack Haraschschenko fell into a navigational trap, where one instruction at the bottom of a page was followed, 30 metres later, by another instruction at the top the of next page. They dropped over a minute at the next timing point and, by the end of the day, were 1m 19s off the lead. Michael Harrison/Lorna Harrison put in the best performance of the day, picking up only three seconds of penalties and were now 32 seconds behind the second placed Porsche and 22 seconds ahead of Hodgson/Bamall.

Another headache was thrust upon the organisers when it was found that the road to Milford Sound was closed due to a landslide, where the road had been washed away in heavy rain. Competitors were due to take an overnight cruise around the Sound. Tourist coaches were allowed to use the road in a convoy system, so one was hired and the rallyists got to their boat. The exercise had to be repeated in reverse the following morning, with a coach taking competitors back to their cars in the secure parking area. Unfortunately, the coach broke down and everyone had to wait for a replacement to arrive. By the time that everyone had assembled at the cars, it was mid-afternoon. The decision was taken to scrap the day’s two regularities, but that the two tests at the Teretonga Park Circuit would go ahead.

Teretonga is the most southerly FIA approved race circuit in the world and offered crews a test with a minimum of two minutes. Sherif Hwaidak was fastest on both runs, stopping the clock six seconds above the bogey. The overnight halt was at Invercargill, on the south coast of South Island.

Day 20 was a big day of competition, with four regularities, containing a total of nine timing points. Filip Engelen/Ann Gillis put in the best performance of the day, dropping just 10 seconds and extending their lead to over one and a half minutes. There was drama further back as the Volvo of Michael Harrison/Lorna Harrison broke its rear suspension. A section of ‘washboard’ gravel road broke the U-bolt locating the rear axle. They were stranded on the side of the road until the sweeps arrived to affect a temporary repair. They picked up the maximum minute penalty at the last two timing points of the day and dropped from third place to fifth.

A last rest day at Dunedin was followed by another busy day of regularities, however there were no changes in the top ten positions and Engelen/Gillis extended their lead by a further 20 seconds. The best performance of the day was taken by Peter Gordon/Griselda Gordon in their replacement MGB GT; they dropped just 10 seconds on the run from Dunedin to Lake Tekapo.

The final day, Day 23, had its competition element in the first part of the morning, after that crews could enjoy the beauty of the Rakaia Gorge on their way to the finish at Christchurch. Peking to Paris veterans, Filip Engelen/Ann Gillis, completed their triumph, finishing with a victory margin of 1m 56s.

There was a draw at Signing On for crews to be allotted randomly into teams. Given the arbitrary nature of this selection, it was surprising that the winning team consisted of the crews that finished in the top three places overall.