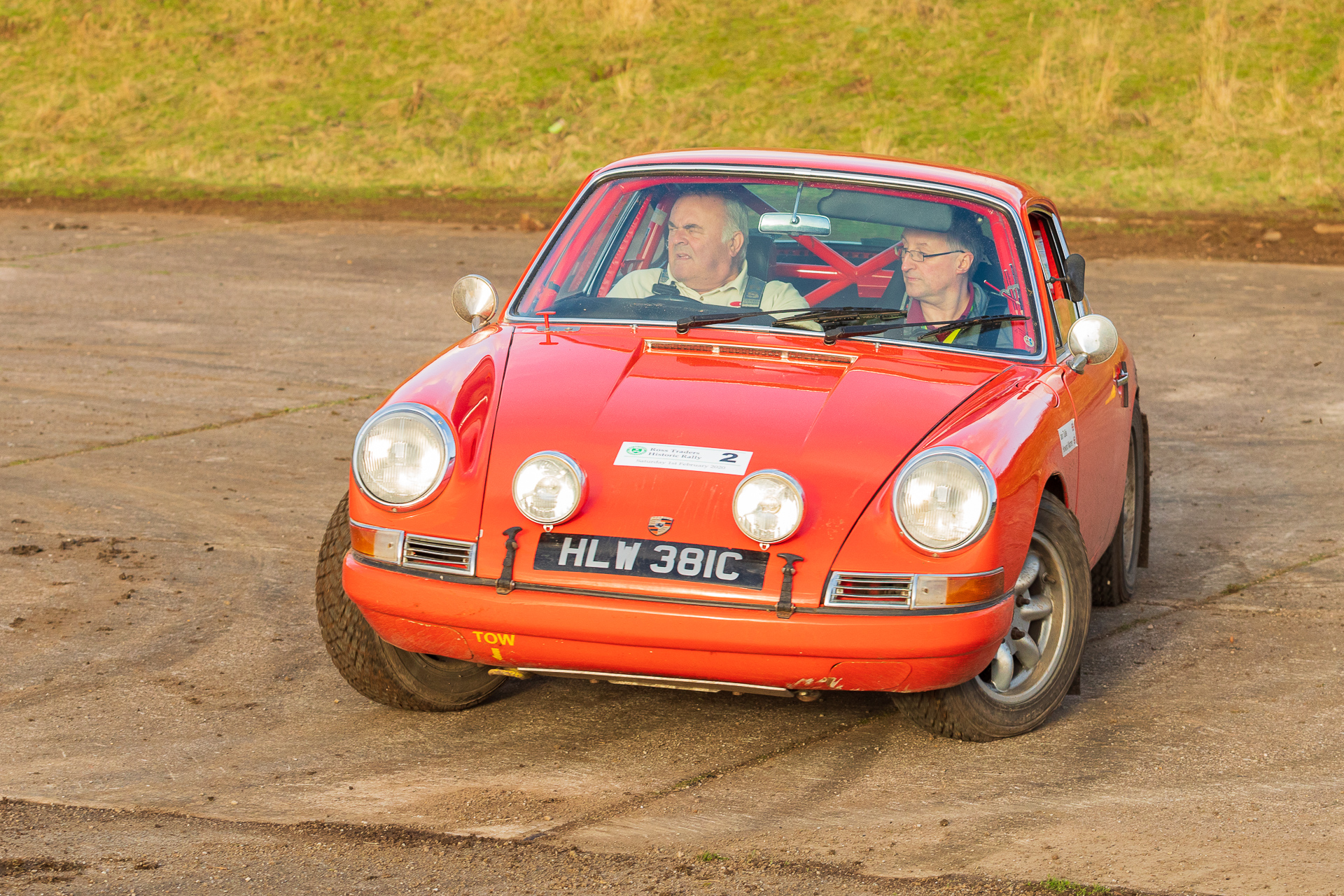 
After an 18 month absence, the Ross Traders returned with a format based largely on the Caerwent Training Area. Nine tests, plus two of the event’s five regularities, took place within the Gwent MoD base. The rally was the opening round of the HRCR Historic Road Rally Championship.

There was a disappointingly low number of starters; just 40 crews took the flag on Saturday afternoon. A clash with the Winter Trial, taking place in Austria, certainly cost some entries, as did commitments to other engagements, such as family skiing holidays, in other cases. In addition, there were a number of potential competitors who didn’t fancy driving and navigating around Caerwent in the dark.

The new team of organisers had been given a major challenge in the days leading up to the rally, when they were told that they couldn’t use one part of the perimeter road as a local resident had objected to the constant noise of cars crossing a cattle grid. The road was to have been used several times during the event, including competitively on one regularity. Frantic work was done to amend the road book giving crews instructions to go out via the A48 main road and back into the camp at the West Gate to avoid the noisy nuisance.

Proceedings got under way at 13:00, with the winning driver of the very first Ross Traders in 1969, Brian Dennis, flagging competitors away. Conditions were dry, but with a bitterly cold wind making life uncomfortable for the marshals.

The first part of the event started with three tests in Caerwent, followed by a 15 mile regularity, with three timing points, in the lanes around Woolaston. The pattern for the day was set on these early tests as three crews emerged from the pack to battle for the lead. Paul Crosby/Ali Procter were fastest on both Test 1 and Test 2, building up a lead of 26 seconds. However, they missed a code board on Test 3; the additional 1 minute penalty dropped them into second place behind Howard Warren/Iain Tullie. The latter crew then extended their advantage with the best performance on the Woolaston regularity; they were 30 seconds ahead of Crosby/Procter when they returned to Caerwent for a second set of tests.

Road and Stage Rally regular, Michael Gilbey, was tackling his first historic regularity rally, navigating for Paul Dyas, Gold Medal winner on December’s Le Jog. Belying his inexperience, Gilbey was just one second behind Tullie on the regularity. Dyas/Gilbey had held third position throughout the opening section of the event and it was these three crews who were to battle for the lead throughout the day.

The maze of Caerwent tracks had caused problems for many crews. The first test, for instance, which was just over 3 miles in length contained over 70 junctions. There were also three PCs and five code boards to locate. Twenty-three crews scored the test maximum of ten minutes. Top seeds and 2018 winners, Ian Crammond/Matthew Vokes, had a difficult time, being penalised 30 seconds after being adjudged to have completed one of the mid-test manoeuvres incorrectly, as were Simon Mellings/Henry Carr. Mellings/Carr were forced to change cars shortly before the rally, replacing their intended MR2 with a Rover 216. They failed to make the Finish as they withdrew with a severe lack of brakes after Test 6. Andrew Buzzard/Robb Lyne were the first retirement of the day, going out after the first regularity.

Things were even trickier on the second test where just 12 cars were under the maximum. Clive Martin/Anji Martin were one of the crews taking a maximum, but despite this they held fourth place overall after Regularity A; they had been fourth fastest on Test 1 and third on Test 3. Gavin Rogers/Carrie Rogers rounded off the top five at this point. They had had a major detour on Test 1 and then taken a maximum on Test 2, but were still fifth, although two minutes off the lead.

Competitors seemed to have got the hang of Caerwent on their second visit for Tests 4, 5 and 6. However, when missed code boards and incorrect manoeuvres were added, 15 crews took a maximum on Test 4, these included Rogers/Rogers, who fell to eighth place as a result.

Peter Joy/Matt Fowle were fastest on the test. They were fourth fastest on Test 5 and third on Test 6 and moved to fourth place overall. They continued within the top five until their Lotus ground to a halt on Regularity C, the final one in Caerwent. They were stopped for 20 minutes and had to cut out part of the next section to remain within their time limit. They were finally classified in twenty-seventh place.

The three-way battle for the lead continued through Test 4 to 6, with seconds being traded between the crews. Their positions didn’t alter; Warren/Tullie still led, with Crosby/Procter in second and Dyas/Gilbey in third. Regularity B was a 15 mile plot ‘n bash section, all within Caerwent, and with six timing points. Remarkably it was the inexperienced Gilbey that finished it with the least penalties; he and Dyas were 16 seconds faster than Crosby/Procter, with Warren/Tullie a further five seconds behind. This didn’t change the positions, but the three crews were now separated by just 28 seconds.

Ian Crammond/Matthew Vokes had matched Crosby/Procter’s second best performance on Regularity B and they were now in fifth position. One place further back was the 2-litre Talbot Sunbeam of Mark Turner/Sasha Heriot, they were the highest placed Expert crew. Michael Mayne/Mark Robinson were the leading Novice team; they were, at that point, 18th overall. They weren’t to maintain that position; they did make the finish, but only after having to cut out most of the last two regularity sections.

After an hour’s break, crews set out on the last set of three tests, plus a regularity, all in Caerwent in the dark. To add to the difficulty the regularity was a plot ‘n bash section. Dyas/Gilbey were fastest by 26 seconds on Test 7 and moved from third place to the lead. Crosby/Procter were second faster, nine seconds ahead of Warren/Tullie; they were now in second place overall, seven seconds behind Dyas/Gilbey.

Test 8 was a mammoth 5.3 miles and contained two PCs and twelve RCs. Both Dyas/Gilbey and Crosby/Procter missed one route check (1 minute penalty), while Warren/Tullie were penalised for incorrectly performing a manoeuvre (30 second penalty). A very quick time meant, that despite their error, Dyas/Gilbey were second fastest over the test and extended their lead. Crammond/Vokes were one of only a few crews to have a clear run through the test; they were quickest and moved up to fourth place. Only nine crews achieved a time better than the 17 minute test maximum.

The last test proved less problematic, with only five of the remaining 23 crews taking a maximum. Crosby/Procter beat Dyas/Gilbey by six seconds, but Warren/Tullie were 20 seconds off the pace. The top three positions remained the same. Mark Goodwin/Anthony Davies had been inside the top ten and battling for the top Expert award, when their Triumph Dolomite Sprint stopped with terminal electrical problems on this test. The VW Beetle of John Kiff/Rob Kiff had retired at the rest halt with a failed clutch.

An eight mile regularity was the final section within the Caerwent base; it had six intermediate timing points. Once again Dyas/Gilbey blitzed the field, collected the least penalties, just 34 seconds. Crammond/Vokes were second on 1 minute 2 seconds, while Warren/Tullie were third (1m 11s) and Crosby/Procter fourth (2m 06s). This meant that the Volvo crew left the MoD base with a lead of almost a minute and a half, with Warren/Tullie over a minute ahead of Crosby/Procter.

There were now just two regularity sections left, these took crews back to the finish at Ross-on-Wye. The first was a 13 mile test in the Forest of Dean; the final section was 7½ miles long and ran around Symonds Yat. Both had three timing points and, crucially, two route checks. The latter were all on triangles. They were to prove decisive.

Crammond/Vokes tied with Andre Scruton/John Youd for the best performance on Regularity D, but Warren/Tullie were just one second behind, with Crosby/Procter ten second further back. Significantly, Dyas/Gilbey, along with seventeen others, missed the second route check; the five minute penalty dropped them from the lead to third place. Hugh Garnish/David Bell had put in the seventh best performance on Regularity D and, having moved into the top ten after Regularity C, they now moved up to sixth place overall. They were then third fastest on the final regularity to promote them another place. At the Finish they took the trophies for the highest placed Expert crew.

Warren/Tullie extended their lead to almost five minutes on the final regularity, as both Crosby/Procter and Dyas/Gilbey missed a further route check each. This gave the Porsche pair their third Ross Traders success, following on from their 2012 and 2016 wins. Crosby/Procter took the runner up spot, two minutes ahead of the third placed Dyas/Gilbey. Despite missing one of the code boards on the final section, Ian Crammond/ Matthew Vokes were fourth, with Garnish/Bell completing the top five.

The father and daughter team of Noel Hughes/Gwawr Hughes, competing in an ex-Colin Evans MGB GT, moved up to eighth position overall and first in Class E1 after being one of the few crews to locate all the controls on the final two regularities. Former three-time Welsh Road Rally Champion Navigator, Hughes put in the sixth best performance over all the rally’s five regularities.

The lowest penalties for the final regularity was taken by the Saab 96 of Keith Jenkins/Tony Brooks. They had been in the top four on all of the three regularities that were run on public roads. Their late surge secured them the Class E2 win; they’d overtaken Clive Martin/Anji Martin on the sections after Caerwent.

Matthew Smith/Simon Hawken easily took the unofficial prize for hitting the most cones on the tests, but survived to be the highest placed Novice crew at the Finish.