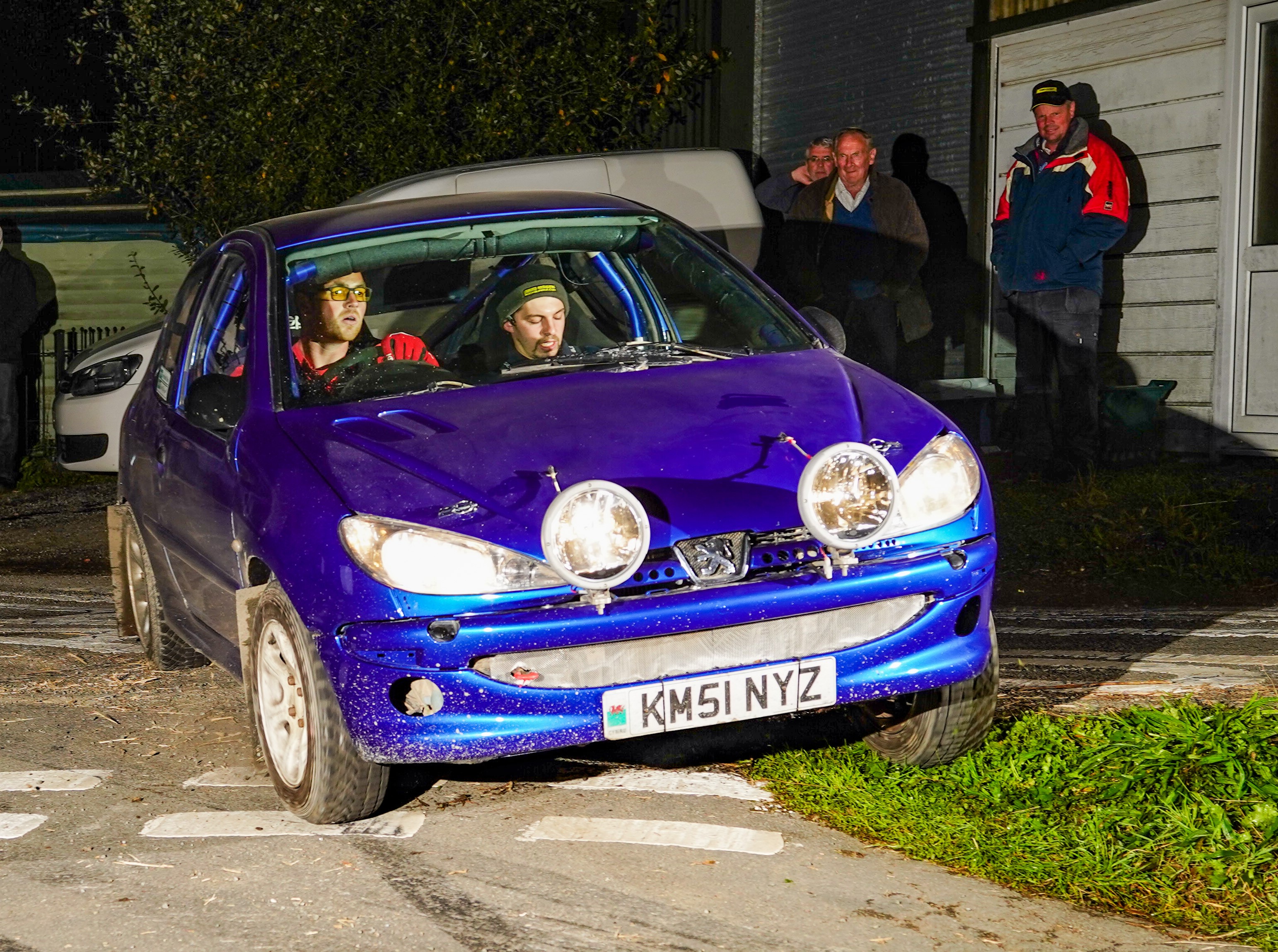 Clerk of the Course: Alan James


After a CoVid enforced absence, the Autumn Road Rally returned following a three year break. A capacity entry of 75 cars took the start from the rally's base at Carmarthen Auction Mart. A dry clear night held the promise of a close contest.

A twisty 13 mile loop around Llangynnog failed to cause the majority of the top 30 crews to lose time. However, Andy Davies/Owain Davies didn't make the start of the section; their Impreza, suffering a severe misfire, was quickly loaded on its trailer. Also failing to make it out of the start car park was the Citroen C2 of Lee Williams/T Jay Lewis; it blew a clutch on the start line.

The second section started near Drefach and snaked its way in a northward direction, taking in four sections of farm track, to finish to the west of Cynwel Elfed.

Rob Stephens/Kieran Price set a remarkable pace and were the only crew to clean the section. Unfortunately, the gearbox on their Escort failed near the start of the next section.

Second fastest over this second section were, Huw Jones/Shaun Richards (Peugeot 206 XSi), who dropped 1m 45s, while Arwel Evans/Nick Bloxham (Ford Escort) were only two seconds behind them.

Being held up by a non-competing car cost top seeds, Daniel 'Lwni' Jones/Gerwyn Barry (Ford Escort), four minutes; the incident also delayed Martin Curzon/Richard Williams (Ford Escort) and George Williams/Cadog Davies (Ford Escort). This delay became of little importance to Curzon/Williams as they were forced out with a broken TCA before Petrol.

The run from TC14 to TC15 through Penrallt Trawscoed farm, with its climb up a track, saw most crews drop time, but only a few seconds in most cases. Evans/Bloxham managed to make TC15 on their time and this put them in the lead, as Jones/Richards were 11 seconds late.

Nigel Nelson/Aled Richards retired at this point; a failing clutch on their Impreza causing their demise. The night was becoming a battle of attrition as a failing engine forced Dan Morris/Dilwyn John (Ford Puma) out, and a broken shaft stopped the Escort of Guto Ifan/Aron Jones. Petrol was taken at the ideally situated Derwydd Garage, near Cynwel Elfed; the first time the service station had been used as a fuel halt for over 25 years.

At this point Evans/Bloxham led Jones/Richards by nine seconds, while the leading Experts, Owain Evans/Arfon Griffiths (Ford Escort), were in third. Mike Roberts/Dafydd-Sion Lloyd (Ford Escort) were in fourth and the only other crew within a minute of the lead.

Ethan Davies/Daniel Jones (Ford Puma) were in fifth place, but were to retire soon afterwards with overheating issues.

The Semi-Expert Class was being led by Matthew Davies/Dion Lewis (Ford Escort); they were in eighth place overall and almost four minutes ahead of their nearest class rivals. The leading Novices, Robert Brown/Gareth Davies (Peugeot 309 GTi), had an even bigger advantage in their category, they had more than eight minutes in hand over their nearest challenger. Both these crews went on to win their classes at the Finish.

There were three sections in the second half, these took competitors as far north as the lanes just below Llandysul, before brushing Brechfa Forest on their return to Carnarthen.

The end of the second section was to prove crucial for Evans/Bloxham, they turned too early at one point, before a shed, rather than after it, and dropped 1m 11s, while their nearest rivals cleaned the control.

Jones/Price now led Roberts/Lloyd by 31 seconds, Evans/Griffiths having dropped a total of 1m 56s at two TCs on the section. George Williams/Cadog Davies, who had been in seventh place at Petrol, managed to go off the road before TC23; they suffered two punctures and bent the steering on their Escort. They had to cut to the Finish and were classified in 37th and last place. All crews dropped time to the penultimate control at Pencnwc, in the lanes to the east of Carmarthen. Evans/Bloxham were fastest to the TC, but were still in third place. Critically Roberts/Lloyd were 35 seconds faster than Jones/Price and took the lead. This seemed to have assured themselves of a second Autumn Rally win, but it wasn't to be, there was an issue.

It became apparent that the marshals at the PC that preceded the critical TC28 had initially set up 300 metres ahead of where they should have been. A course car moved them to the correct location; however, the original control board was left behind, still in place. Jones/Price passed the board and, not finding a marshal, assumed they'd missed a code board. They went back to check; this was the cause of their late arrival at the time control. At the Finish, after careful consideration, the organisers decide to cancel penalties at TC28.

Fifth placed Owain Evans/Arfon Griffiths held on to their Expert Class win, but Eilir Williams/Hefin Jones (Vauxhall Corsa) were only 27 seconds, and one place behind at the Finish.

It had been a surprisingly tough rally, with fewer than half the starters making the Finish of a nicely timed event. The vast majority of the 38 retirements were due to mechanical problems.