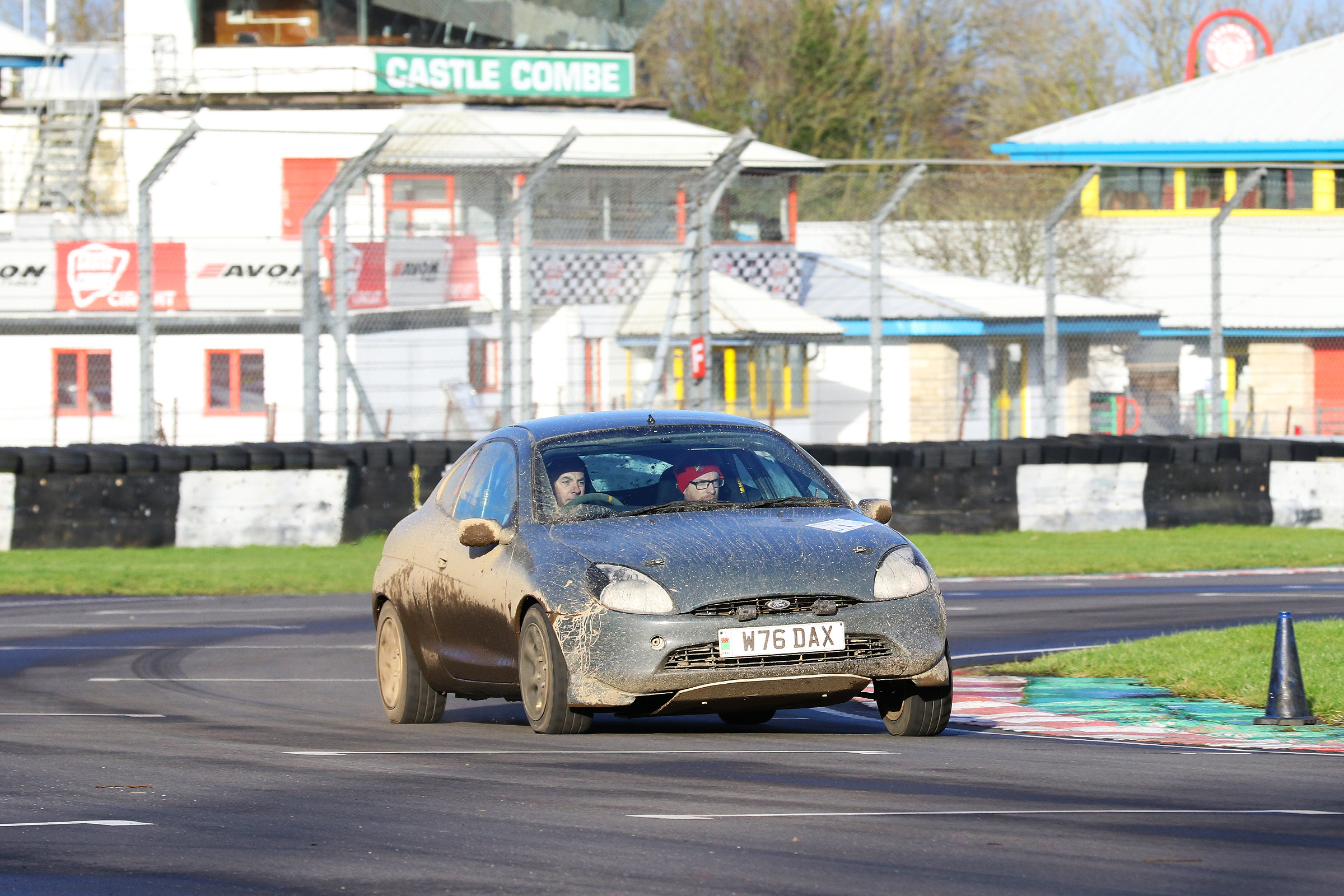 
The Festival Targa Rally, Round One of the BTRDA, CSMG and South Western Targa Championships, used Castle Combe Race Circuit as its base. It had tests at the Wiltshire venue, plus at Charlton Park and RAF Lyneham. There were nine tests in total, providing 44 miles of competitive motoring.

The first dozen crews had dry but cold conditions for the opening test, but then the heavens opened; heavy blustery rain fell for the rest of the morning and continued in showers for the remainder of the event.

John Davies/Nick Bloxham (Ford Puma) threw the gauntlet down on the opening 6.31 mile test around Castle Combe. They finished with a time 25 seconds faster than Ethan Davies/Dafydd Evans (Ford Puma), to take a lead that they weren’t to lose.

Dan Morris/Geth Johnson (Ford Puma) put in an aggressive performance, this led to them collecting two line faults, adding 40 seconds to their test time. They still were in third place, tying on time with Gary White/Bradley White (BMW 318Ti).

There was a more troubled start for Owen Turner/Rachel Vestey (MG ZR); they missed to stop at a Passage Control. There was a two minute penalty for the offence; this left them in 50th position. On Test 2, a repeat of Test 1, they collect a 20 seconds wrong manoeuvre penalty, but still recovered to stand in 29th position.

Of the 86 starters, 11 failed to make the end of Test 1. These included Mick Valentine/John Thornley (Ford Escort) and Tim Tordoff/Ian Frazer (Peugeot 205 GTi).

Davies/Bloxham were once again fastest on Test 2 and left Castle Combe for Test 3 at Charlton Park, with a 42 second lead over Davies/Evans, who were second fastest on Test 2. Davies/Evans’ rally was to come to a dramatic end on the 4.1 mile Charlton Park. They slid into a tree, damaging their Puma beyond immediate repair. They blocked the track and delayed the next three cars, who had to be given a notional time for the test.

Davies/Bloxham maintained their domination of the event by taking fastest time by 33 seconds on the test. They now led Morris/Johnson by 1m37s, while Gavin Rogers/Georgina Clark (Ford Escort) were in third only 6 seconds behind the Puma. Huw Morris/Dan Pidgeon (Ford Focus) were in fourth, but had White/White just one second behind.

Test 4 and 5 were at RAF Lyneham; the first time that this venue had been used for a targa rally. The test, run twice, was 6.9 miles long. While Davies/Bloxham extended their lead by taking fastest time by 11 seconds, Morris/Johnson had a nightmare, getting lost in the maze of the base; they dropped over two minutes and fell from second to seventh place.

After Test 5 crews returned for a mid-event halt at Castle Combe. Having taken fastest time on all five of the opening tests, Davies/Bloxham held a lead of 2m28s over Morris/Pidgeon, who had Rogers/Clark just 4 seconds behind them. By this point Turner/Vestey had climbed back up to seventh place.

Jason Stone/Dan Stone (BMW Compact) withdrew before the halt; there seemed to be a problem with their engine and they decided to call it a day before doing any serious damage to the unit.

There was a very close fight for the lead in the Clubman Rally. Adrian White/Lewis White (BMW 318Ti) held a one second lead over James Appleby/Nath Perks (Ford Fiesta). These positions were to be reversed during the afternoon tests, with Appleby/Perks coming home 26 seconds ahead of their rivals at the Finish.

Notwithstanding their comfortable lead, Davies/Bloxham were concerned as their Puma was developing gearbox problems. They eased off, taking only one fastest time on the event’s last four tests. The strategy worked as, despite a line fault on the penultimate test, they came home to secure victory with a winning margin of 2m36s.

Fastest time on the remaining three tests was taken by Gary White/Bradley White, this moved them up from fourth at the halfway halt to being just two seconds behind runners up, Gavin Rogers/Georgina Clark, at the Finish.

Fourth place was taken by Huw Morris/Dan Pidgeon, whose challenge was dented by a line fault on Test 6. The top four crews were well clear of the field; there was a three minute gap from fourth to fifth; that latter position was secured by Owen Turner/Rachel Vestey.

Sixty-three crews made it to the finish on what had been a tough event. The Festival Targa Rally had set a high standard for the rest of the BTRDA series to try and match.