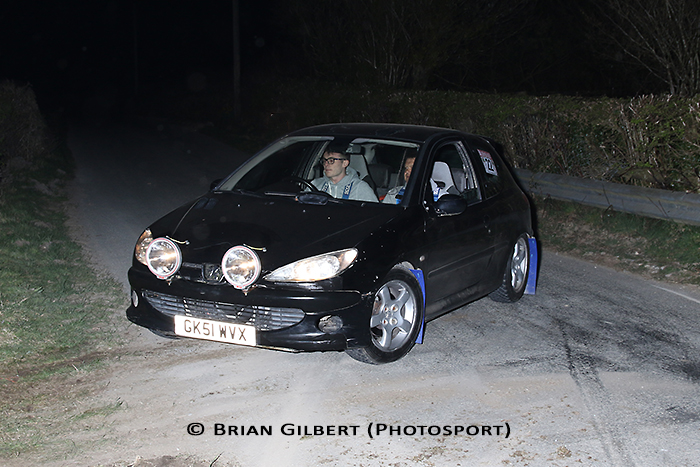 
Teifi Valley MC’s novice oriented event, the Rali Bro Preseli, returned after a three CoVid enforced absence. The 62 starters faced a demanding 75 mile route, which was split into five sections. There was no petrol halt and both the start and finish were at Crymych.

The first competitive section was a short 2½ mile affair that started at Pentre Galar and finished prior to Pont yr Haiarn. All crews dropped time, with Ioan Lloyd/Dylan Evans (Escort) being quickest and the only crew under a minute late at SF1.

The opening part of the second section ran north from Llandissilio to Alltypistyll. Lloyd/Evans went off the road here and lost four minutes before they got going again. They set a blistering pace on the rest of the event and, despite their off, might have been in contention for the overall win if they hadn’t missed a Via control in the second half and picked up a fail.

The leader’s demise left a tight battle for the lead. By the first timing point on the second section Eilir Williams/Owen Davies (Vauxhall Corsa) led at this point but had five crews within 20 seconds of them.

How Howells/Hefin Jenkins should have been in second place, only one second off the lead, but had missed a PC on the opening section. They then lost eight minutes on the easy run down to the second timing point and then missed the same Via as Lloyd/Evans. They were classified in 29th place overall at the Finish.

The second section was over 30 miles long and had 10 timing points before the final control, which was above Dinas Cross. It sorted out the top order, with Hefin Jones/Arwel Thomas (Escort) emerging as the leaders at the end of it. However, they were only nine seconds in front of Steffan Davies/Iwan Williams (Peugeot 206).

These two front runners were now over a minute ahead of the field, which were led by Williams/Davies. Trystan Leyshon/Dafydd Jones (Ford Focus) were in fourth place, but were two minutes off the lead.

There had been a number of retirements amongst the top seeds by this point. Car 2, Aled Rees/Jason Davies (Escort) had retired due to a misfire, while failed engines accounted for both Tim Hand/Darren Jones (Vauxhall Astra) and Mike James/Aled Johnson (Peugeot 206). A broken shaft stopped the Ford Fiesta of Emyr Davies/Barry Davies.

First position changed once again on the third section. This test started Newport and looped north of Nevern, before a tricky run down via Henllys Castle to Felindre Farchog. At the second TC Hefin Jones/Arwel Thomas lost their lead as they booked in a minute early, adding two minutes to their total.

Steffan Davies/Iwan Williams now took a lead they weren’t to lose. They set a consistent pace over the remainder of the event and came home over a minute ahead of Eilir Williams/Owen Davies. Jones/Thomas ended in third, another minute down.

Davies' win was a repeat success for his family; his father, Dyfan, hving won the Bro Preseli in 2006.

The Novice Class was won by Thomas Jones/Steffan Evans (Proton Satria), who finished in ninth place overall; two minutes ahead of their nearest class rivals.

There were three starters in the Beginners Class, only Staffan Jones/Sian Davies (Ford Fiesta) were classified as finishers and won the category.

As usual on the Bro Preseli, the winners of the previous running of the event were invited to take part, but weren’t eligible for overall positions. The 2019 winners John Rossiter/Iestyn Pynn (Escort) took up the invitation. They had the lowest penalties of any crew at one point and finished in what have been fifth place.