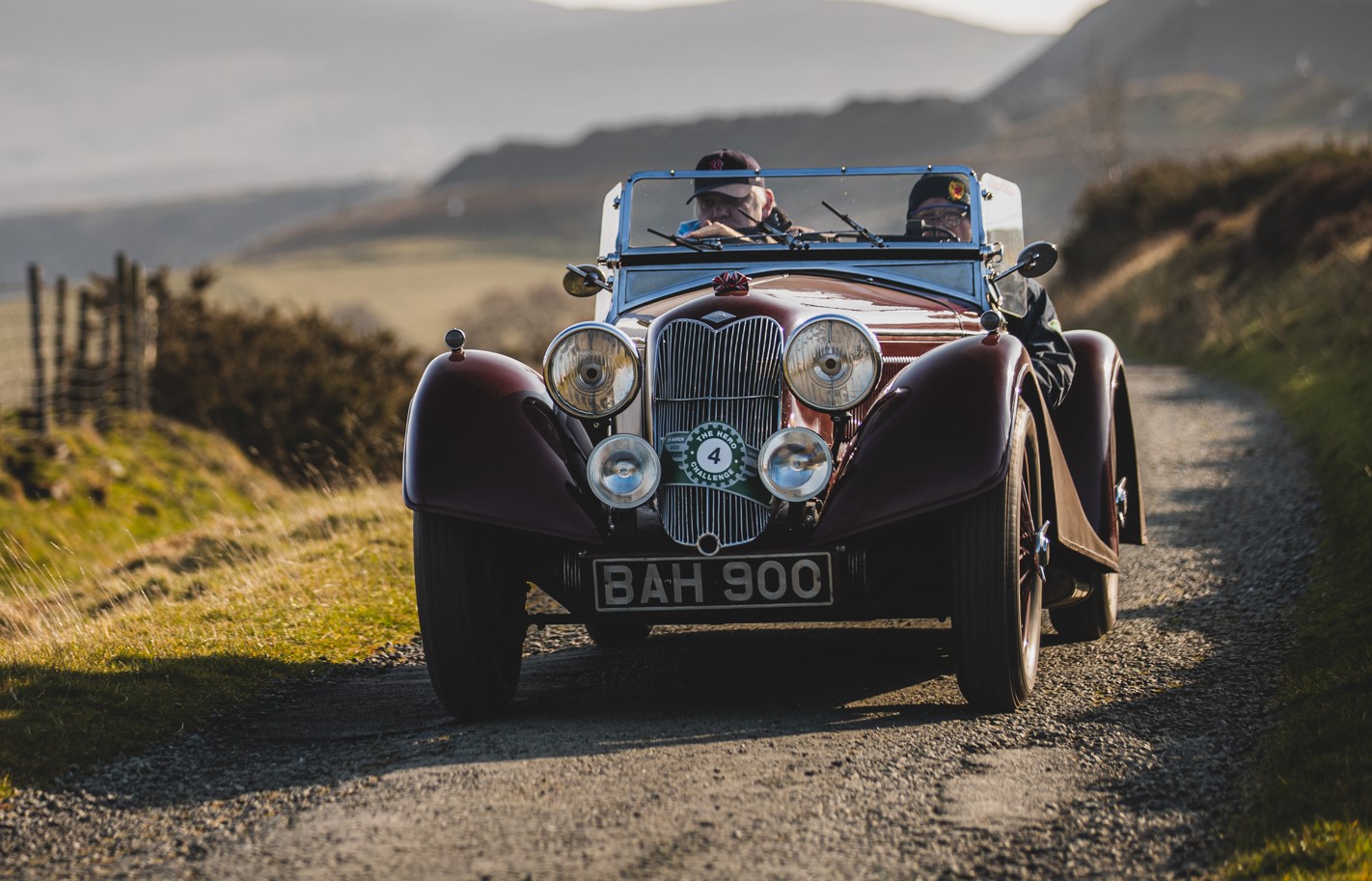 
HERO-ERA moved to North-East Wales for the first of their third Challenge events of the year. The rally was based at Mold and through the spectacular scenery of the Clwydian Hills and Denbight Moor on a bright, sunny and warm day.

The 140 mile route was split into six regularity sections and there were seven tests at various locations. The difficulty of the navigation increased as the day progressed. With the rally running in the back yard of Clark of the Course, Guy Woodcock, some obscure tracks were bound to be used.

There were 86 starters. Ciprian Nistorica/Marcus Jones were not among them, their Jaguar Mk2 having suffered a seized engine before the flag dropped.

The opening 10 mile regularity had four timing points. It started just south of Mold and ran in a south-westerly direction towards Graianrhyd, before looping almost back on itself before finishing at Rhyd-y-ceirw. It proved no problem for Malcolm Dunderdale/Anita Wickins (Renault 12 Gordini) who finished the section with zero penalties.

The second regularity, Moel Truan, was a much longer affair. It was 20 miles in length, with six timing points. It started on the Horseshoe Pass and ran almost directly west, running to the south of the Clocaeneog Forest and finishing at Llanfihangel Glyn Myfyr.

The best performance over the section was taken by Les McGuffog/John Youd (Austin Healey 3000), on what was the navigator’s home territory. John King/Tracy King had forsaken their familiar Dolomite and were competing in a Toyota MR2. They put in the second best time on the regularity, two seconds behind McGuffog/Youd.

As usual on Challenge events, crews with both driver and navigators classed as Masters could complete, but weren’t eligible for overall awards. There were three such crews on the Challenge One; they ran in a separate class.

Stephen Owens/Nick Bloxham (Porsche 911) were one of these. They became unstuck on the second regularity. A miscalculation over a section that included a long 12mph average, saw them pick up almost two minutes in penalties. Angus McQueen/Mike Cochrane (BMW 323i) led the class throughout the day.

Two tests over the kart circuit at Glan Y Gors were followed by a coffee halt at the venue. Jon Dunning/Henry Carr (Ford Escort RS2000) were the class of the field here, taking fastest time on the first test and runner up spot on the second.

They were almost matched by Tim Green/Mel Green (Austin Mini), who took second and first on the two tests, with a total one second behind Dunning/Carr. Green/Green went on to take fastest time on Test 4, 5 and 6. However the driver was denied the Test Pilot Award as the pair picked up a Wrong Test on Test 3. They still achieved an eight placed finish at the end of the event.

At the coffee halt there was a three tie for the lead; Dunderdale/Wickins, McGuffog/Youd and Dick Baines/Harry Baines (Mini Cooper S) were all on 33 seconds. Paul Heaney/Sandra Heaney (Lancia Fulvia 1.3S) were one second behind in fourth.

The route moved back east with a 15 mile regularity through Clocaeneog Forest, finishing at Cyffyliog. There were then two tests and a lunch halt at Ruthin Cattle Market.

With second best time over the regularity and two top ten performances on the tests, Dunning/Carr had moved into the lead by the break. They were 11 seconds ahead of the oldest car in the rally, the Riley Sprite of John Lomas/Pete Johnson.

The two regularities that followed the lunch break used the lanes south of the A55 and Denbigh. The first, Moel Tywysog, was a 17 mile Jogularity with six timing points. Chris Howell/Jon Briggs (Ford Lotus Cortina) picked up the least time penalties here. The pair were fortunate to still being going; the mechanics having to fix a serious oil leak on the Cortina at Ruthin.

Second best time on the regularity was taken by 2021 Challenge Champions, Alistair Leckie/Matt Outhwaite. The pair had had, by their standards, a poor morning. They had been in 12th position at Glan Y Gors, however a strong afternoon showing was pushing the up the leader board.

Test 5 was in the Bryngwyn Back Estate, with its run past a replica full scale Spitfire. Fastest here, once again were Tim Green/Mel Green.

An afternoon tea halt and two more tests were taken at Ruthin Auction Market. Then crews were faced with the final regularity, which was called ‘The Sting In The Tail’ - a very accurate name.

There were six timing points in the intricate 15 mile section, which ran from Ruthin to Mold. Two timing points were located in farmyards and, for many crews, proved to be difficult to find. Almost half the field missed TP 6B and another 10 failed to discover TP 6C.

John Lomas/Pete Johnson had a clear run through the regularity and took the win with a victory margin of 14 seconds. Leckie/Outhwaite continued their afternoon very impressive charge and this moved them up to the runner up spot at the Finish. Dunning/Carr held on to take third place two seconds behind the Saab Turbo pair.

Simon Ayris/Kim Bannister (MG B Roadster) were another crew to have a poor morning, but came back in the afternoon to secure fourth place at the Finish.