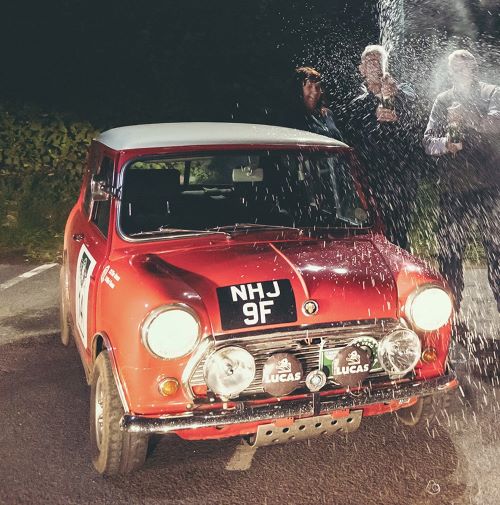 
HERO-ERA moved to new territory for the HERO Challenge Three, the third and final event in the 2022 Challenge Championship. It started at Liphook and used 140 miles of lanes in Hampshire and West Sussex, with competitors tackling seven regularities and nine tests, before finishing at Petersfield.

A bumper entry of 100 cars was received, however a number of CoVid cases reduced the number of starters to a still impressive 91 cars.

Competition opened with four tests in the ex-MoD base at Broxhead. Many crews made a bad start after starting Test 1 and going to the Finish of Test 2. The finish of Test 2 was easily visible part of the way through Test 1 and a number of drivers charged to the wrong control, incurring two wrong tests as a result.

Dave Hemstock/Colin Readwin (MG B GT) were fastest in Class 5 on all of the tests and therefore emerged from them with zero penalties, and were the early leaders.

The opening regularity was an 11 mile affair, with two timing points. It ran from Greatham to Lower Farrington. Tim Green/Mel Green (Austin Mini) were amongst three crews who dropped a single second over the section. On the same total were Paul Hernaman/'Crow' (Porsche Carrera), setting up a battle that was to last for the remainder of the event.

A not unexpected problem in such a metropolitan area emerged at this early stage and that was the amount of non-competing traffic that had to be dealt with. The organisers had introduced the Joker System to allow for this issue; this automatically reduced a crew's largest late penalty during the rally to be reduced to 15 seconds.

The second regularity started at East Worldham and finished, 13 miles later, at Bentley; there were three timing points. There were four crews who picked up just one second penalty over it, these included Malcolm Dunderdale/Anita Wickins (Renault 12 Gordini), who were battling for the win in the HERO Challenge Championship.

At the Morning Coffee halt, which was taken at the Jolly Farmer in Blacknest, Hernaman/Crow led Green/Green by two seconds. Robert Robinson/Peter Mellor (Audi Coupe) were in third, while Patrick Lynch/Hubert Lynch (Mini Cooper S) were only a second behind. There were four crews in the Masters Class; these experts weren’t eligible for overall awards and were in a class battle of their own. All four had triggered their Jokers when they were held up by traffic on the second regularity. At the break the class was led by Stephen Owens/Nick Bloxham (Porsche 356B), who were 24 seconds ahead of Steve Robertson/Thomas Robertson (MG B GT V8).

Immediately after the break, competitors returned to Broxhead for a repeat of the four tests there. After the, Green/Green had taken the lead, having added two seconds to their total, while Hernaman/Crow were fastest in their class on the first three, but were only fifth quickest on Test 8 and this gave them a penalty of 7 seconds.

However, the Porsche crew were back in front by the lunch break after two further regularities. These had taken the route south to Midhurst, the venue for the break. The first of these two regularities had navigation by map, with a speed table. It ran southeast of Liphook.

Hernaman/Crow added five second to their total, while Green/Green put on ten seconds, including five seconds for being early at one control. This meant that the two crews were separated by two seconds at Lunch.

Martin Neal/Lesley Neal had been well inside the top ten until their MG TA developed steering problems. They struggled through Regularity 4 but fell to 57th position. They withdrew at the break.

The afternoon opened with the final test of the event; this was at Tangmere Airfield Nurseries, the country's largest grower of peppers. Both of the contenders for the lead were fastest in their class, so the gap between remained the same as they entered the three regularities that finished the event.

Green/Green retook the lead, by a sole second, on the first of these sections, but then pulled away on the last two to finish 13 seconds ahead of the Porsche. John King/Tracy King (Toyota MR2) moved up the order to clinch third place by one second to take their first podium finish.

Defending Challenge Cup winners, Alistair Leckie/Matt Outhwaite, had been without a car for the event when John Lomas stepped in and offer them a MG TB. The pair's regular Saab 900 Turbo was having its engine rebuilt in preparation for their first attempt at the Le Jog.

Outhwaite had a commanding lead in the Navigator Challenge Table, and only Anita Wickins could deprive him of the title. Leckie was in competition with John Lomas and Malcolm Dunderdale for the drivers' crown.

Leckie/Outhwaite had a bad start to the event, getting held up by non-competing traffic and were in 38th position at the coffee halt, however they recovered to finish in 13th position and, vitally for the championship, took the Class 1 win; this gave them 10 points and meant that they had secured their second Challenge Title.