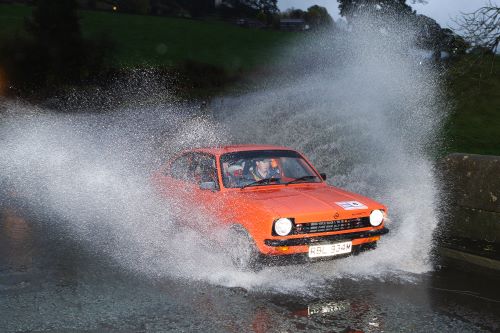 
The Dansport Historic, the penultimate round of the HRCR Clubmans Championship, included a unique two day format, with the first leg being in the dark on Saturday night. For 2022 the Matlock MC event had moved it headquarters to Buxton and the start was based at the town's beautiful Pavillion. A number crews were using the Dansport as a warm up for the Rally of the Tests, these included the top seeds, Paul Crosby/Ali Procter, who were using a Mini Cooper S which the driver had been preparing for two years.

The night leg wasn't a mere warm up to get crews into the groove, it was a tough test, using some of the classic Derbyshire lanes, opening with a run through the Goyt Valley. Two crews dropped just one second over the section's three timing points; these were Thomas Bricknell/Roger Bricknell (VW Golf GTi) and eventual winners, John Haygarth/Martyn Taylor (Opel Kadett GT/E).

The second section started at Swythamley Hall and used the Peak District roads between Leek and Buxton. The original plan had had seven timing points, but two were cancelled after a car became beached on a hairpin and following crews had to re-route, missing a control. Then a unhappy farmer stopped the use of the final part of the regularity. Thus, only the first three timing points counted in the results.

Callum Guy/Amy Henchoz (Volvo 142) put in the best performance on the regularity, although they hit problems on the next section. Their car had been using excessive amounts of fuel and they ran out; they had a reserve tank, but they lost two minutes and this put them out of the hunt for a top place at the end.

Also with problems were Paul Heaney/Sandra Heaney (Lancia Fuliva), who had alternator issues and had to miss part of Regularity Three, which start at Wildboarclough and ran around the Macclesfiled Forest.

Vast experience on road rallies showed as the best over this third test was Dan Darkin, who his father, 1995 Welsh Road Rally Champion Navigator, Nick Darkin; their Mazda MX5 was six seconds better than any other competitor. Back at the Buxton Supper Halt, it was John Abel/Iain Tullie (Ford Escort) that held a lead of six seconds. Close behind them were the season-long rivals of Leigh Powley/Brian Goff (Toyota Corolla) and Dan Willan/Niall Frost (Volvo PV544). The Dansport had an award for the best Expert crew, over and above the usual class prizes; it was Darkin/Darkin who held a handsome lead in the competition as they sat in fourth place overall. Haygarth/Taylor were in fifth place.

While Saturday evening had been dry, if a little chilly, Sunday morning dawned to heavy rain, that was to continue for the rest of the morning. This was to make life miserable for the marshals, but at least the downpour kept cyclists and horse riders off the lanes.

After a restart from the Buxton Pavillion, the Sunday morning competition opened with a four timing point regularity in the Danebridge area. The top two positions remained the same after it, but Haygarth/Taylor had moved to third place.

The first tests of the rally followed. The first two were at Red Earth Farm, near Tittesworth Resevoir. The two tests had a common start but different finish locations; this caught out a couple of crews who went from the start of Test 1 to the finish of Test 2, collecting two wrong tests on the way.

Haygarth/Taylor were fastest on both tests and took a lead that they weren’t to lose.

The next two tests were at the nearby Rudyard Hall. Over the four tests Powley/Goff and Willan/Frost swapped second place a number of times, while overnight leaders, Abel/Tullie, slipped down to eighth after a troubled Test 3.

The fifth test at Wetwood had to be cancelled. A footpath crossed the test and marshals had been allocated to deal with the occasional dog walker, however, on the morning, large numbers of teenagers embarking on the Duke of Edinburgh Award scheme appeared and it was thought safer that the test be abandoned.

In the torrential rain, broken wipers on their VW Golf caused the retirement of Gareth Hockeridge/Rob Henchoz, while Ian Prout/Kevin Bryant were forced out when the exhaust broke on their Austin A40.

At the Morning Coffee halt, which was taken at Hartington Hall, Haygarth/Taylor led Powley/Goff by 19 seconds, while Willan/Frost were 12 seconds further back. There was a tight battle for fourth, with Darkin/Darkin, Jon Dunning/Henry Carr (Ford Escort RS2000) and Jason Stone/Daniel Stone (Ford Escort) covered by eight seconds.

Two further regularities took crews to the Lunch Halt, this was at Fenny Bentley. The top three positions had remained the same, but the gaps between the crews had narrowed. Powley/Goff were now 13 seconds behind the leaders, but Willan/Frost, who had put in the best performance on both Reg 6 and Reg7, were now only three seconds off second place.

Andrew Parr/Oli Waldock (Mini Cooper S) had held a healthy two minute lead in the Novice Category at Morning Coffee, but they missed two Passage Controls on Reg 6, and the five minute penalty, put them behind Phil Cheek/Chris Rhodes (Hillman Avenger), who went on to win the Category prize.

Mark Goodwin/Anthony Davies had endured a character building season in the HRCR series, with their Triumph TR7 retiring on a number of occasions with a mystery electrical problem, however it was a broken wheel bearing that forced them out of the Dansport.

Two demanding regularities took the route back towards Buxton. Reg 8 caused problems for Willan/Frost as they were 46 seconds late at the final timing point; they fell three places as a result.

Competition closed with four tests; three, once again three were near Tittesworth Resevoir, while the last was at the Biker Training Centre in Buxton. Stone/Stone had had a nightmare on Reg 9, this had dropped them down them out of the top ten. They recovered by taking fastest time on all of the four tests, this moved them back to ninth place at the Finish. The driver ended the rally with the lowest aggregate times across the eight tests.

Haygarth/Taylor gradually extended their lead during the afternoon and came home 48 seconds ahead of Powley/Goff, while 2022 HRCR Clubman Champions, Willan/Frost, recovered to take third, 1m 29s off the lead. Taylor had the additional glory of having put in the best performance on the event’s nine regularities.