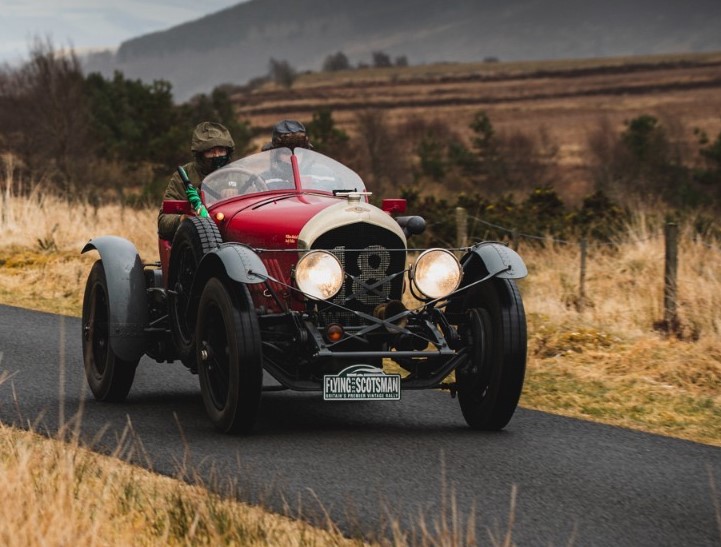 
HERO-ERA attracted a capacity 100 car entry of pre-war cars for the twelfth running of their legendary Flying Scotsman. Late positive CoVid tests reduced the number of actual starters, but 93 cars took the flag at Slaley Hall on Friday morning.

Weather was a major topic of conversation as snow had been falling during Scrutineering the previous afternoon. However, only the early stretched, south of the Scottish Border, showed evidence of any wintery weather.

Competitive motoring started immediately, with a test in the grounds of the start venue. Theo Hunt/Jimmy Galliver (Frazer Nash TT Replica) took fastest time here by two seconds from William Metcalf/Andy Pullan (Bentley SuperSports). Hunt/Galliver were to go on to take quickest time on eight of the event’s ten tests.

The first snowy regularity started at Wark and skirted the north-eastern edge of the Kielder Forest. It was 11 miles long with four timing points. Paul Dyas/Iain Tullie (Bentley Derby 4¼) put in the best performance, but Metcalf/Pullan dropped only two seconds more and went into a lead that they weren’t to lose.

The route crossed the Scottish Border just after Kielder Village and two more regularities, Teviotdale and Woll Rig, took crews to the lunch halt at Cringletie House Hotel. By this point Metcalf/Pullan had opened up a seven second lead over Martin Hunt/Bob Mannix (Frazer Nash BMW 328). Second to fifth places were covered by just three seconds, the four crews being evenly spaced at one second apart. Dyas/Tullie were in third, Paul Crosby/Ali Procter (MG TB Supercharged) were fourth, while John Abel/Niall Frost (Lagonda LG45) were fifth.

One crew failed to make it to the lunch halt; Chris Wilks/David Creech suffered a broken rear axle on the Singer Le Mans Prototype, one of only three ever built, and they were out. Iain Wilson/Edward Williams (Frazer Nash Nurburg) were late into the halt, having stopped for a horse rider, they were unable to restart the car.

The afternoon had just one regularity, but three tests. On the regularity, a number of crews were caught out by a loop, where a spot height should have been avoided, and missed a timing point. Penalties for this section amongst the top crews were minimal.

The first of the afternoon tests was at the Forrestburn hill climb, with the following two at the Driftland Circuit and Fife Airport. Hunt/Galliver were fastest on the first and last of these and second quickest at Driftland. Honours at that venue went to Jonathan Turner/Jonathan Procter (Triumph 8C Dolomite).

Test penalties on the Flying Scotsman were calculated on a car’s scratch time, rather than the more usual HERO-ERA protocol of class improvement; therefore, total penalties were larger than normally recorded.

The first overnight halt was taken at the Fairmont Hotel, south of St Andrews. By the times that crews arrived there, the gaps between the leading runners had been extended. Metcalf/Pullan were still seven seconds ahead of Hunt/Mannix. Despite having far less power than the larger cars around them, Crosby/Procter had moved up to third after the tests; they were six seconds off second place.

There was then a 21 second gap to Abel/Frost in fourth, while Dyas/Tullie had slipped to fifth, six seconds further back. After a bad morning on the regularities, Hunt/Galliver moved up to sixth place. They were tied on penalties with Bill Cleyndert/Elise Whyte (Ford Model A Special).

Day Two opened with a visit to Crail Airfield. There was a Time Control section, plus a test at the ex-Royal Navy Air Station.

Metcalf/Pullan extended their lead by being fastest on the TC Section, taking seven seconds out of all their rivals. Four crews tied for second place; these were: Hunt/Galliver; Turner/Procter; Dyas/Tullie and Crosby/Procter.

Cleyndert/Whyte had gone well on the TC section, but, on the following test, the Ford suffered a broken trailing arm. They managed to get it welded, but the repair failed again and more repair work had to be carried out at the lunch halt. The crew were to complete the event, but the continual problems meant that they missed a great number of controls.

Also in trouble was the Aston Martin 2 Ltr Speed of Simon Arscott/Matthew Abrey; the driver forgot to switch on the electric fan and the car overheated. They had to miss two sections, but re-joined before the lunch halt.

Metcalf/Pullan still led after the Crail sections, but second place was now held by Crosby/Procter, who had a narrow two second advantage over Hunt/Mannix. Hunt/Galliver had advanced to fourth at the expense of Abel/Frost.

After a regularity near the southern shore of the Firth of Tay, where four crews, including the top two, dropped just one second, the competition moved north from Fife into Angus.

The third regularity of the day ran through Tummel Forest. Dyas/Tullie were fastest here; they were a second ahead of both Stuart Anderson/Emily Anderson (Bentley Derby 4¼) and Hunt/Mannix.

By the lunch halt at Blair Castle, Hunt/Mannix had retaken second place and were four seconds in front of Crosby/Pullan, but were now 15 seconds off the lead. The battle for fourth place was tight with Dyas/Tullie, now in fourth, eight seconds in front of Abel/Frost in sixth; Hunt/Galliver were in the middle holding fifth place.

By this point the retirement list held seven cars, these included Andrew Boland/Ann Boland, who had a diff fail on their Bentley 3-4½, while gearbox failure had put the Talbot 105 Alpine of Wilfried Schaefer/Sandra Schaefer out.

Significantly the list had another car added immediately after lunch when Crosby/Procter broke the diff on the MG as they started the test within the Blair Castle grounds.

The Blair Castle test was followed by one at the neighbouring Lude House. Once again Hunt/Galliver were fastest on both, although on the second one they had to share honours with Metcalf/Pullan.

There were two more regularities before the overnight halt at Aviemore. On the second one Hunt/Galliver misread the speed table and arrived at the final timing point 20 seconds early. In such a tight battle the penalty was significant; it annulled the advantage that they had built up on the tests and they ended the day in fourth. They were on the same total as Dyas/Tullie, but lost out on third place due to the tie break – lowest penalty on the first regularity point of the event.

At Aviemore Metcalf/Paulln had eked out a few more seconds and now led Hunt/Mannix by 16 seconds. Abel/Frost were in fifth, but only five seconds behind the tied crews in front of them.

After a test at Aviemore, Day 3 took crews over the Cairngorms via Tomintoul to the Dee Valley and a coffee halt at Aboyne. After the test and the two regularities Hunt/Galliver had moved to a clear third place, picking up nine fewer seconds than Dyas/Tullie over the sections. At the same time Abel/Frost closed the gap to Dyas/Tullie by four seconds.

Hunt/Galliver were fastest by two seconds on the test at Kincardine Hill, while Dyas/Tullie gained four seconds back on Abel/Frost, and then another three over the third regularity of the day, which ran from Edzell to Fern. Two more seconds gained on the fourth regularity put Dyas/Tullie ten seconds ahead of Abel/Frost, while they were the same margin behind Hunt/Galliver. Up front, Metcalf/Pullan were 30 seconds ahead of Hunt/Mannix at the lunch halt at Ballathie.

There now remained just one more regularity and a test before the Finish at Gleneagles Hotel. An old 1942 one inch to the mile OS map was provided to navigate the final regularity. It was tricky, even for the most experienced navigators, as, not only did they have to cope with the unfamiliar scale, but a number of landmarks, such as the station at Inchaffray Abbey, had disappeared since the map was produced.

Metcalf/Pullan dropped four seconds on the sections, while Dyas/Tullie were on five. Hunt/Galliver and Abel/Frost added seven to their totals. Hunt/Mannix struggled and were 27 seconds late at the two controls. They recovered by taking fastest time on the final test at Strathallan Castle.

All this excitement meant that Metcalf/Pullan finished 50 seconds clear of Hunt/Mannix, while Hunt/Galliver were 21 seconds further back in third. For the winners it was a superb way to demonstrate the performance of their Bentley SuperSport, a car that had been sold was due for delivery to its new owners three days after the rally.

Eighty-one of the 93 starters made it to the Finish of what had been acknowledged as a outstanding event, with an excellent and testing route.