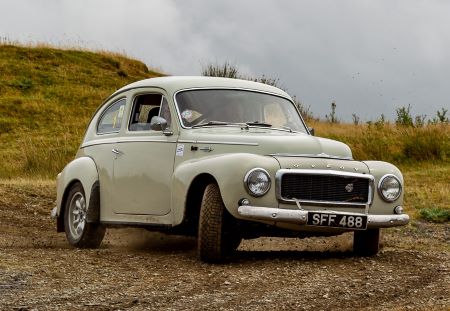 
Almost twenty years after being part of the HRCR Nocturnal Challenge, the Gremlin returned as part of the HRCR Clubman series. As in previous incarnations, the Brecon Motor Club event relied heavily on the roads and tracks of the Epynt Military Ranges.

From the base at Three Cocks, the 70 starters began the day with a four timing point regularity that started by Erwood and finished on the Ranges near the Concrete Road. There was a code board to collect near the start of the section, but this was found by only seven of the crews. The check was cancelled as there was some suspicion that 'spectators' spotted nearby may have created some mischief.

Top seeds and HRCR Championship leaders, Dan Willan/Niall Frost (Volvo PV544), put in the best performance on the reg, dropping just seven seconds. This put them at the top of the leader board, a position that they would maintain for the rest of the day.

A number of crews, notably Darell Staniforth/Nicky Staniforth (Toyota Corolla) and Paul Dyas/Martyn Taylor (Volvo Amazon) were delayed on this section by a lorry; both collected the maximum one minute penalty at the next timing point.

It was a very short rally for Nigel Woof/Sally Woof (Triumph TR4); a leaking brake pipe, and the resultant lose of fluid, put them out at RS1.

The first of eight tests was on the Concrete Road itself. Owen Turner/Andrew Dadswell (Mitsubishi Lancer), due to a license issue, were running in the Clubman Rally and took fastest time here; they were one second ahead of Willan/Frost.

Regularity Two was a mammoth; it was 32 miles in length, with nine timing points and ten passage controls. It started by the Drovers Arms, ran down the New Road, then off the Ranges through Llanfihangel, before going down Route 60 and back up Llewellyn's Way, and finishing along the Burma Road.

Paul Crosby/Andy Pullan (Porsche 911) were best over the section, picking up 15 seconds in penalties, six better than Ian Crammond/Matthew Vokes (Mercedes Benz 280SL). The Mercedes crew would go on to put in the best total performance over the event's eight regularities.

Willan/Frost dropped 27 seconds, but this was three better than Valentine/Fowle, so the Volvo pairing extended their lead. Crosby/Pullan were now in third, one second behind Valentine/Fowle and eight in front of Crammond/Vokes.

Three leading runners all added a minute to their totals as they missed the Passage Control at the Llandeilo'r Fawr Triangle; these were Dyas/Taylor, Gavin Rogers/Dan Stone (Reliant Scimitar SE5a) and Stephen Owens/Ian Canavan (Porsche 911).

There now followed three tests, the first a 3½ mile run through Halfway Forest. The other two were at the Quarry and the Artillery Ranges. Willan/Frost pulled further in front as they were fastest through Halfway.

Crosby/Pullan lost time as they had to retrace their steps to pick up a code board in Halfway. Despite this they moved into second place as Valentine/Fowle were penalised for missing a board. This dropped them to fifth behind Dave Leadbetter/Cath Woodman (BMW 2002Ti), who had moved up to fourth place.

Fastest on Test 4 was taken by Rikki Proffitt/Graham Wild (Porsche 911); the pair having been in the top six on all of the tests up to that point. They were to retire in the afternoon, when “something broke”.

After this set of tests, Willan/Frost were over a minute ahead of second placed Crosby/Pullan, while Valentine/Fowle had got back to third place.

The retirement list had grown with Roger Tushingham/Amy Henchoz (MGB GT) going out with a broken steering arm on one of the tests, while Harvey Steele/Martin Pitt (Volvo 144) suffered more punctures than they had spare tyres. A broken differential had accounted for the Triumph 2000 of Cliff England/Peter Rushforth.

A comparatively short regularity took crews to the lunch halt at North Road Garage in Builth Wells. The section was ten miles long, with three timing points and a PC. It started on the Mabion Way, before returning to the public road with a run down the B-road to Garth and then a loop through the lanes to Cilmery.

At the halfway halt, Willan/Frost led Crosby/Pullan by exactly a minute, with Valentine/Fowle 22 seconds further back and 15 in front of Crammond/Vokes. Leadbetter/Woodman were in fifth, but only one second ahead of James Griffiths/James Howell (Mini 1275GT).

Competition restarted with Test 5, a repeat of Test 1 on the Concrete Road. This was followed by a regularity that ran down Mabion Way, before the tests at the Quarry, Artillery Range and Halfway were tackled for a second time.

The leaders pulled further ahead on these sections; they were 1m 15s ahead after the final test. Valentine/Fowle took fastest times on Tests 7 and 8 and were now seven seconds behind Crosby/Pullan. Crammond/Vokes had a poor set of times and fell to seventh, while Cotswold Historic winners Leigh Powley/Brian Goff (Toyota Corolla) moved into fourth place.

Two regularities completed the day's competition; the first was 9 miles long, while the second was 16 miles in length. Regularity Five started at Dixies, ran down to Copse, then via Bamfords, the Celleni Track, Four Ways to finish at Canada Corner. The final regularity was on public roads and went from Rhyd-y-berry to Bronllys.

The sections saw no changes to the top nine places and Willan/Frost came home with a victory margin of 1m 09s, while Crosby/Pullan finished just two seconds ahead of Valentine/Fowle. Owen Turner/Andrew Dadswell were the clear winners in the Clubman section; ending with a penalty total that would have put them in tenth place in the Inter Club event.