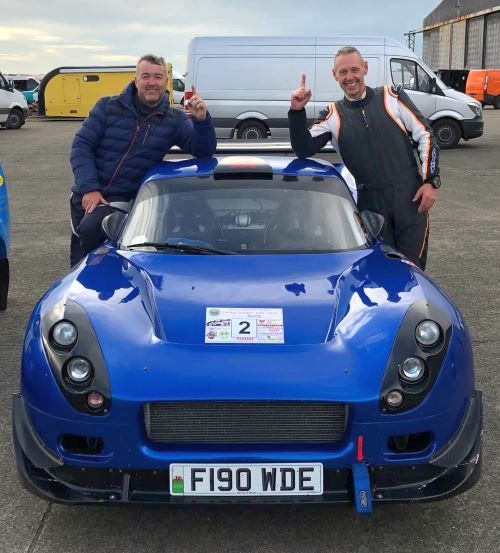 Clerk of the Course: Wenna Roberts


Harlech & DMC had laid out six stages for competitors to tackle on the massive expanses of Llanbedr Airfield. In contrast to earlier events at the venue, only the perimeter roads were used, with only the ends of the main runways being included in the stages.

On the day preceding the rally, set up Crews had endured half hourly downpours, but the event itself ran in warm and dry conditions.

Sixty-two cars took the start; 55 in the Inter Club event and seven in the F1000 Junior Rally.

Competition started with a six mile stage, which was made up of two laps of the perimeter. Fastest time on SS1 was taken by 2021 winners, Gethin 'Dot' Davies/Ben Ruff (Darrian T90); they were four seconds ahead of Wayne 'Tar' Jones/Rhys Jones (Darrian T90 GTR). A wrong tyre choice meant that Gareth Edwards/Tim Nunn (Darrian T90 GTR+) were too cautious and were only third quickest, eight seconds off the lead.

The second stage used three laps of the circuit and totalled 9.25 miles. It saw the demise of Paul Morgan/Sam Stafford (Honda Civic); they had been ninth fastest on the opening stage, but a broken CV joint put them out. Also retiring on this test were Lyn Llewellyn/Ben Godney; their Citroen C2R became stuck in gear.

Wayne 'Tar' Jones/Rhys Jones took fastest time and the lead on SS2, while Gareth Edwards/Tim Nunn moved to second place, as Gethin 'Dot' Davies/Ben Ruff had to give way to the larger engined cars; they fell to third.

At this point all of the top five positions were held by Darrians. Jason Wilson/Lee Wilson (Darrian T90 GTR) were in fourth, but were to retire with gearbox ailments during the lunch break after SS3. Meanwhile Dai 'Dot' Davies/Gerwyn James (Darrian GTR+) were in fifth after SS2 and had moved up to third place on SS3, but had to withdraw after SS4 with the driver feeling unwell.

Welsh Tarmac Championship contenders, Daniel Jones/James Davies, who had been second overall on the Patriot Stages earlier in the month, were in 12th place after SS2, but went out on SS3 with a broken drive shaft.

It was the turn of Gareth Edwards/Tim Nunn to be fastest on SS3 and this put them into a narrow lead of eight seconds. Wayne 'Tar' Jones/Rhys Jones were in second place and it looked like the day was shaping up to be a battle between these two crews. However, the newly rebuilt engine in Jones' Darrian failed on SS4 and they were out.

Despite saying that they were backing off slightly, Gareth Edwards/Tim Nunn took fastest time on the remaining three stages and came home almost a minute and a half ahead of the field to secure the win.

Davies/Ruff maintained their pace, but were fortunate to reach the end as their steering broke on the penultimate stage; they used a rachet strap to hold the parts together, but on SS6 heard the strap snap shortly before the Finish. With relief, they crawled to the final control to secure second place. The top three was completed by the M-Sport Fiesta Rally2 of Darrell Taylor/Dylan Thomas.

It was a bad day for almost all of the Welsh tarmac Championship contenders. Both Wayne 'Tar' Jones and Daniel Jones had been in the title race before their retirements. However, their championship hopes remained alive as series leader Neil Jones could only finish in 36th place; he'd received a stage maximum for doing too few laps on SS4.

Another Championship contender, Paul Jenkins, had a character building day; delayed by electrical problems on SS1, he had the gear stick break on SS2. He, and co-driver Llinos Davies, finished in 41st position.

In contrast, William Mains, fifth in the Championship, took a dominant class win in the 1400cc category; leading all day and coming home two minutes ahead of their rivals.

In the 1600cc Class, John Lewis/Merfyn Williams (Darrian T9), endured event-long understeer to claim a clear win in the category; they finished in tenth place overall, almost six minutes ahead of their nearest class challengers.

There were seven starters in the Junior Rally. Sam Mason/James Seymour (Suzuki Alto) led throughout the day and finished 29 seconds ahead of Max Speed/Alan Gilbert (Peugeot 107).