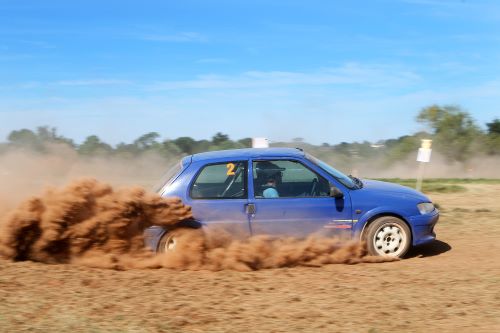 Clerk of the Course: James Griffiths

In contrast to the 2021 event, which had been largely wet, the 2022 rally was run in dry and dusty conditions.

With one no-show, 59 cars took the start at 09:00 on Sunday morning. The early runners ran over virgin grass, so competitors in the latter part of the field had the advantage of following the tracks.

Jon Skelley/Rebecca Skelley recorded the fastest time, however it was test faults that proved most significant, over 550 faults were awarded during the day. Skelley/Skelley had 1m 10s added to their time and they eventually found themselves in eighth place overall once these faults had been added.

Leaders after Test 1 were Paul Gillard/Adam Bourne (Ford Fiesta); they were three seconds ahead of Lewis Ayris/Katie Bleach (MG ZR). Phill Lloyd/Elinor Thomas became the first retirement after breaking a drive shaft on their Escort.

There was excitement in the Padock after the test, when a fire started under the Renault Clio of Andrew Bridgewater/Josh Snook. The car had developed a fuel leak during the test and, when petrol reached the hot exhaust, it erupted. Fortunately, the blaze was put out quickly, without too much damage, but the crew were out of the event.

Also out at this point were Philip Russ/Charlie Emkes whose BMW 318i Compact had developed a bad oil leak.

Despite clipping a post, Ayris/Bleach put in the best performance on Test 2, a repeat of Test 1, and moved into the lead, four seconds ahead of Gillard/Bourne. These two crews were now 30 seconds clear of the field, which was led by Matt Endean/Suze Endean (MG ZR).

Tests 3 and 4 were modifications of the first two tests; the number of test faults increased dramatically. Significantly Gillard/Bourne picked up almost three minutes in faults, which dropped them to 17th place. Meanwhile Ayris/Bleach were delayed by the navigator becoming unwell; they found themselves in 22nd position.

In contrast, Griffin/Peterfield put in the best performance and moved into the lead; they now held a 32 second advantage over Morgan/Morgan, while Endean/Endean were three seconds further back in third, having been penalised 30 seconds for an incorrect manoeuvre.

Chris Woolley/Jamie Woolley (BMW E30) had shared the best time on the test with the leaders; this had moved them up to seventh place.

Griffin/Littlefield extended their lead to 43 seconds on Test 4. Endean/Endean moved into second, now heading Morgan/Morgan by 14 seconds. Ayris/Bleach were back on form and took quickest on the tests. Without their delays on Test 3, they would have been competing for the win at the Finish.

Gearbox failures accounted for both the Rover 25 of Stephen Burles/Tilly Burles and the Citroen Saxo VTR of top seeds Paul Bevan/Ollie Jackson on this test.

A leisurely lunch break allowed time for marshals to be fed and for the setting up of the mammoth Test 5; this used two loops of the course, with a split by the farm yard. The break did nothing to slow the leader’s pace; they took fastest time, just over 21 minutes, and extended their to more than a minute. Endean/Endean were still second, but now had Elliott Sharp/Michael Spicer (MG ZR) just three second behind them.

Morgan/Morgan had been using a strategy of ensuring that they avoided test faults and they lost time on Test 5 as they spent time correcting an error and performed a manoeuvre correctly. They fell to eight as a result, but still led the Clubman Rally.

The final test was due to be a repeat of Test 5, but that test had demonstrated that there was a significant dust problem with so many cars on the course at the same time; the two loops being used led to congestion in poor visibility. The decision was made to reduce Test 6 to just a single lap.

Endean/Endean took fastest time; this secured the runner up spot for them and reduced the lead to Griffin/Peterfield to 51 seconds at the Finish. Sharp/Spicer came in third, 11 seconds further back.

Morgan/Morgan claimed the win in the Clubman Rally; their victory margin was 59 seconds over Trevor Disney/Aaron Toms (Ford Focus ST170).

David Allman/James Nicholls (Peugeot 205 XS) finished in 12th place; they were the only crew to finish the rally without any test faults added to their total.