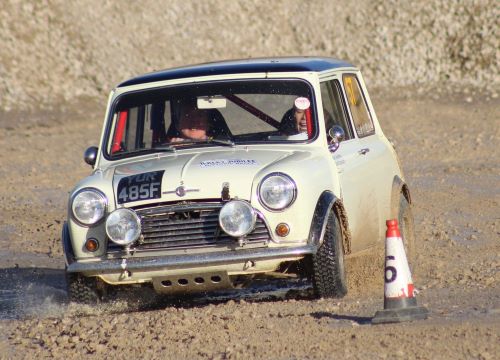 
The Ilkley Jubilee finally took place after surmounting a number of major obstacles. The event had moved its base northward to Leyburn, this move was intended to put the rally nearer to its principal area of competition, the Catterick Ranges. However, military training demands caused the MoD to withdraw permission for its use.

A Herculean effort by the organising team, finding new test venues and route, rescued the event, but the trials were not over.

Originally scheduled for September, it was delayed due to the Queen's death, but, undeterred, it found a new slot, and finish venue, in November. It became the final round of the HRCR Clubman Championship.

The day's competition consisted of six regularities and nine tests, the majority of the latter being at a new venue, Metcalfe’s Farm, near Leyburn.

Unusually for HRCR rounds, the Ilkley Jubilee used reverse seeding, so it was Pete Jagger/Andrew Millington who led the 47 starters from the start, with 2021 winners, Steve Head/Mark Appleton, last away.

The opening two regularities didn’t cause too many issues for the leading runners. The first ran from Constable Burton to Catterick, and the second, a Le Jog style section, used the lanes between Little Fencote and Kiplin Hall, taking competitors to the coffee halt at Ellerton.

At this point Paul Crosby, fresh from his win the previous day on the Northumberland Border Rally, and Ali Procter were in the lead; they had a total of eight seconds, two ahead of Darren Everitt/Susan Dixon. This was to be the high point of the event for these two crews, neither was destined to make the Finish.

Crosby/Procter were first to falter; they slid into a ditch on the third regularity. They were seven minutes late at the next timing point, meaning that they received the maximum 1m30s penalty. This incident also delayed the 2021 winners, Steve Head/Mark Appleton, who helped drag the stranded Mini back on to the tarmac. They lost 20 seconds.

The Vauxhall Magnum of Robert Clifton/Julie Clifton also ended up in a ditch on this regularity, but, unlike Crosby’s Mini, they were unable to get out for almost an hour.

This regularity ran along the edge of the Catterick Ranges. Leigh Powley/Brian Goff (Toyota Corolla) put in the best performance here and took the lead. They were now eight seconds ahead of Graeme Cornthwaite/Lynsey Procter (Morris Mini). Despite their delay, Head/Appleton were in third.

Crews then headed to Metcalfe Farm for five tests. Chris Haygarth/Colin Martin (Toyota MR2) were fastest on the first, while Jonathan Amery/Tom van der Gucht (Renault 5 Gordini Turbo) took honours on the second, beating the bogey. On the third test, around a gravel pit, 22 cars beat the bogey.

The tests were followed by a lunch halt back at the Leyburn Auction Mart start venue. Powley/Goff had extended their lead after the tests, and now had a 12 seconds cushion over Darell Staniforth/Nicky Staniforth (Mini Cooper S). Having been the long-time Ilkley Jubilee Clerk of Course, Henry Carr, contested the event the first time; he and driver Jon Dunning held third place at Lunch.

Regularity 4 started just outside Leyburn and ran through Wensley and Coverham, before finishing at Middleham. It used Deeliarity navigation, where the route is described, but not all junctions are included. There was a control in a farmyard in an attempt to catch out crews; only a small number were. The section proved to be to the liking of Car 34, David Mann/Ian Doble (MG C GT), they posted the best time, one second ahead of Powley/Goff and Staniforth/Staniforth.

There was only a short respite as the next regularity started at Ulshaw. There were three timing points on this section, as the route headed north, finishing near Barden. Again, a number of farmyards were utilised. Powley/Goff were best over it, but Staniforth/Staniforth were only a second behind, meaning that now 13 seconds separated the two crews.

Competitors then returned to Metcalfe Farm for four more tests. Powley/Goff extended their lead by a further two seconds on Test 5, but then, on the following test, the king lead came lose from the distributor on their Corolla. They lost 30 seconds rectifying the problem and their leading position. They fell to third, behind Staniforth/Staniforth and Dunning/Carr.

By the end of the final test, the father and daughter Mini crew held a lead of seven seconds over Dunning/Carr. Powley/Goff had taken fastest time on the penultimate test, but were still in third place, 12 seconds off the first place.

The final regularity was a sting in the tail; it was 20 miles in length and by now it was dark. It used some classic roads, including runs over Grinton, Redmire and Askrigg Moors. It saw the demise of Crosby/Procter, gearbox gremlins stopping their Mini, and Darren Everitt/Susan Dixon, their Triumph 2000 suffered a broken ball joint.

Staniforth/Staniforth put in the best performance over this section and secured the victory, with a winning margin of eight seconds. Nicky Staniforth also had the honour of having collected the fewest penalties over the six regularities.

Jon Dunning was the fastest driver over the nine tests, as he, and navigator Henry Carr, took the runner up spot. Powley/Goff dropped 35 seconds at the penultimate timing point; the Toyota crew held on to third place, finishing a single second ahead of Steve Head/Mark Appleton.

The drive of the rally came from Chris Haygarth/Colin Martin, they finished in seventh in their Toyota MR2 and took the Novice Category Award.