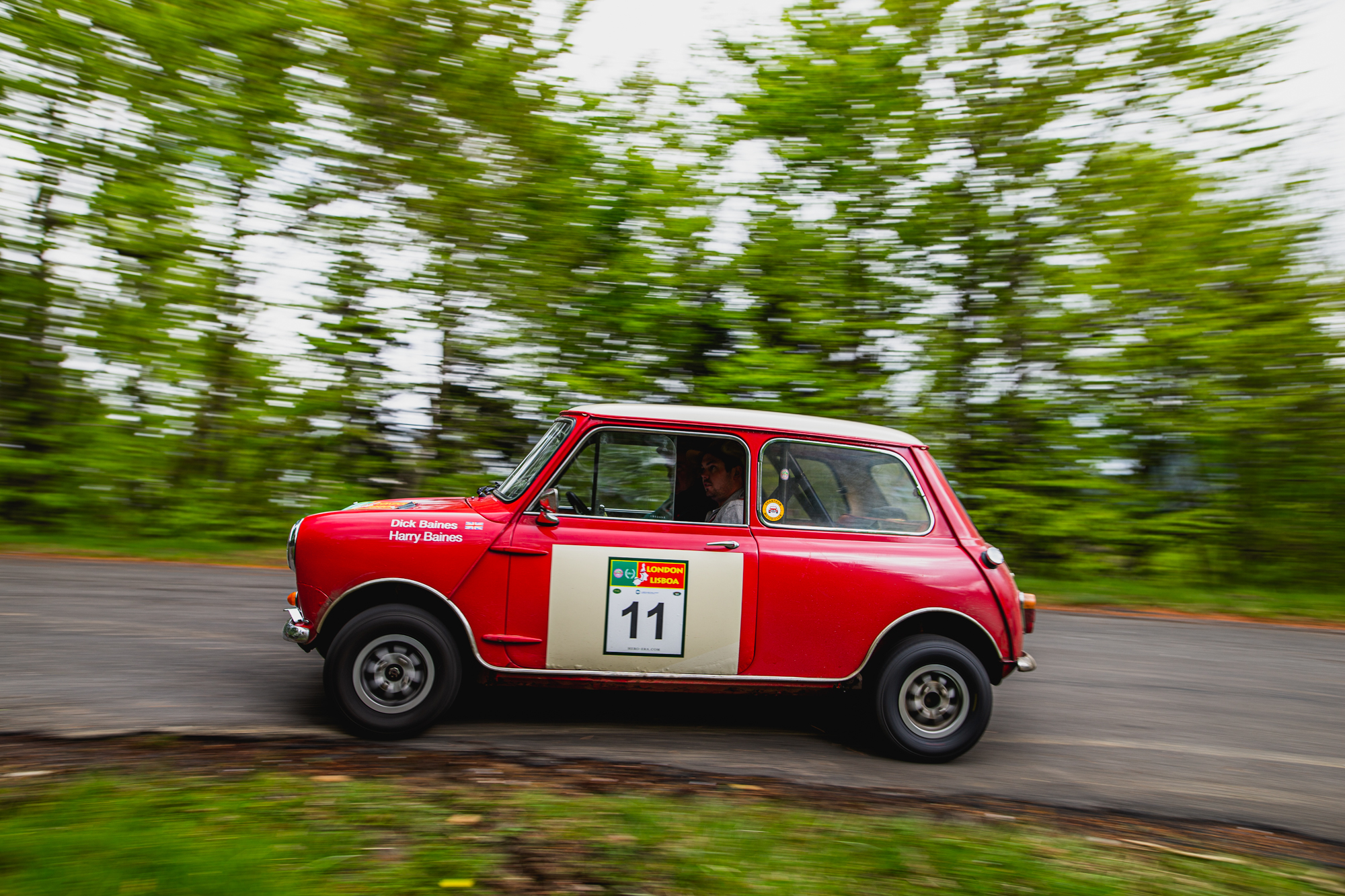 Deputy Clerk of the Course: Will Rutherford


The ten day sixth running of the London Lisboa started at Brooklands. Forty-three crews took the start and immediately tackled a test on the famous Weybridge banking. Four regularities then took crews to Portsmouth and the overnight ferry to St Malo.

The Austin Healey 3000 of Ken Binstead/Sarah Binstead established themselves at the head of the leader board after this run, having dropped just one second on the final two regularities of the day. Dick Baines/Harry Baines (Mini Cooper S) and Nigel Woof/Sally Woof (Alfa Giulia Sprint) tied for second place, six seconds behind the leaders.

After disembarking from the ferry, competitors regrouped at Combourg and were set off for the day in the order that they arrived at the start control. It was a tough day, with five regularities and a test before the overnight halt at Futurscope, just north of Portier.

Binstead/Binstead maintained their lead, but by the day end their advantage had been cut to four second as Baines/Baines put in the best performance on the final two regularities. Woof/Woof, who had only started competing two years previously, were in third 19 seconds behind the Mini.

Tony Sutton/Bernard Northmore (Porsche 911SC) were in fourth, just two seconds off third place, having taken fastest time on the single test of the day. This was a notable performance as the two had only met for the first time two days before the rally started.

The big losers of the day were Stephen Owen/Pete Johnson (Porsche 911 SWB). They added ten seconds to their total after failing to stop astride the stop line at a timing point and then dropping over a minute with a wrong slot. Fortunately for the pair, the event was using the Joker System, so the penalty for this misdemeanour was reduced to 15 seconds.

Day 3 was another linear affair, starting at Futurscope, taking in a lunch halt at Brantome, before finishing the day at Montauban. Sharp showers were a feature for much of the day.

Binstead/Binstead had a consistent day, being at the top of the score sheet on all four of the day’s regularities, and arrived at Montauban with a lead of 24 seconds. Baines/Baines were still in seconds, but Owens/Johnson had recovered from the Day 2 travails and were in third, just a second ahead of Woof/Woof.

Andorra was the day end destination on Day 4. Crews had five regularities and one test to tackle, the final one being a steep climb inside Andorra. Fears of snow on this section proved unfounded as the tarmac was clear, although snow covered the ditches.

The Austin Healey powered Binstead/Binstead to an extended lead of 49 seconds by the end of the day. Second place was now held by Woof/Woof, they were three seconds ahead of Baines/Baines, who had been slowed at one point by the Mini dropping on to two cylinders.

The fifth day was a half day of competition with a lunch time finish at the familiar Boltana Monastery on the southern side of the Pyrenees. There was one test and three regularities. The major story of the day was the retirement of the second placed Alfa of Woof/Woof; the car suffering a breakage within the gearbox.

This drama meant that Binstead/Binstead arrived at the overnight hotel at Pamplona with a lead of over a minute. Baines/Baines were now in second place, 29 seconds ahead of Owens/Johnson. The first time pairing of Nick Maris/Henry Carr (Datsun 240Z) were in fourth, three seconds ahead of Sutton/Northmore.

Quickest on the single test of the day was taken by David Coxon/Pete Hawkins (Austin Helaey 3000). They were to take fastest time on all the remaining ten tests of the event and Coxon was the clear winner of the Test Pilot Award at the Finish.

The best performance of the day was taken by Derek Skinner/Susan Skinner (Porsche 912); they dropped just 27 seconds and moved into the top ten. Day 6 was to start badly for them as their Porsche ground to a halt on the run out from Pamplona. A broke coil was replaced and they were on their way without any penalty.

Competition for the sixth day started at lunchtime at the castle of Torre Loizaga, which houses the largest collection of Rolls Royces in Europe. It had also been the start venue for the first London Lisboa in 2002.

The hills of Cantabria provided the venue for the day’s five regularities. It was on the second of these that the leader’s low slung Austin Healey lost its exhaust. They got the part repaired by had to cut route, missing the remainder of the day. They completed the event in 27th position.

Also in trouble were Andy Twort/Claudine Bloom; their Volvo Amazon 120 broke a brake drum. The pair decided that they would avoid the remainder of the competitive sections, but made it to the Finish, where a replacement drum was waiting.

The Escort RS2000 of Julian Adams/Martin Farnworth had a failing cam shaft follower and this caused them to withdraw from the event at the end of Day 6.

With the Binsteads’ demise, Baines/Baines found themselves in the lead, 39 seconds ahead of Maris/Carr. Steve Robertson/Julia Robertson (Triumph TR3) picked up the least number of penalties for the day, moving the pair to fifth place, behind Owens/Johnson and Sutton/Northmore.

The remainder of the event saw the focus on two battles at the top of the leader board; Maris/Carr were closing the gap to Baines/Baines, while third place was being closely contested by Owens/Johnson and Sutton/Northmore.

The first half of Day 7 continued the route’s progress along the North Spanish coast, but after lunch the course headed south to the overnight halt at Leon. It was the most intense day of the event, with five regularities and two tests.

Day 8 took crews into the event’s fifth country, as the Portuguese border was crossed in the afternoon, with the overnight halt being at the glorious Vidago Palace Hotel. Day 9 continued with the southern run towards Lisbon and concluded with two runs up the Caramulo hill climb.

The final day was dominated by tests, with five in the day; the last four completing the competitive sections before the Finish at Estoril.

By the end of Day 8 Maris/Carr had reduced the gap to the leaders to 28 seconds, and then closed to within eight seconds by the end of the penultimate day. However, on the final day, the Datsun crew may have tried too hard and an overshoot plus a line fault on a test, meant that the father and son team of Dick Baines/Harry Baines secured the win with a victory margin of 15 seconds. It was a remarkable win as it was only Harry’s fourth event, his first being the 2021 HERO Novice Trial.

The fight for the final podium place was even tighter. Owens/Johnson held the position by nine seconds at the end of Day 7, but Sutton/Northmore were back in front, by 11 seconds as the competitors arrived at the Vidago Palace. Owens/Johnson got back into third by time that crews arrived at the end of Day 9, but only by two seconds, and it was Sutton/Northmore who gained third place at the Finish, ending three seconds ahead.

Steve Robertson/Julia Robertson finished in fifth and took the Class 2 Award, while Graham Platts/Neil Ripley were sixth having survived a scare on Day 9 when a wheel nut was lost on the first run up the Caramulo hill climb. The Austin Healey finished the test with the front near side wheel at an odd angle. The sweeps effected a repair and Graham gingerly completed the second run, before the wheel was properly secured.

The field had been led out of the Brooklands start by the 1917 Le France Roadster of John Harrison/Catherine Harrison. They were unable to complete many of the competitive section, but made it to Lisbon and were rewarded with the Spirit of the Rally Award.