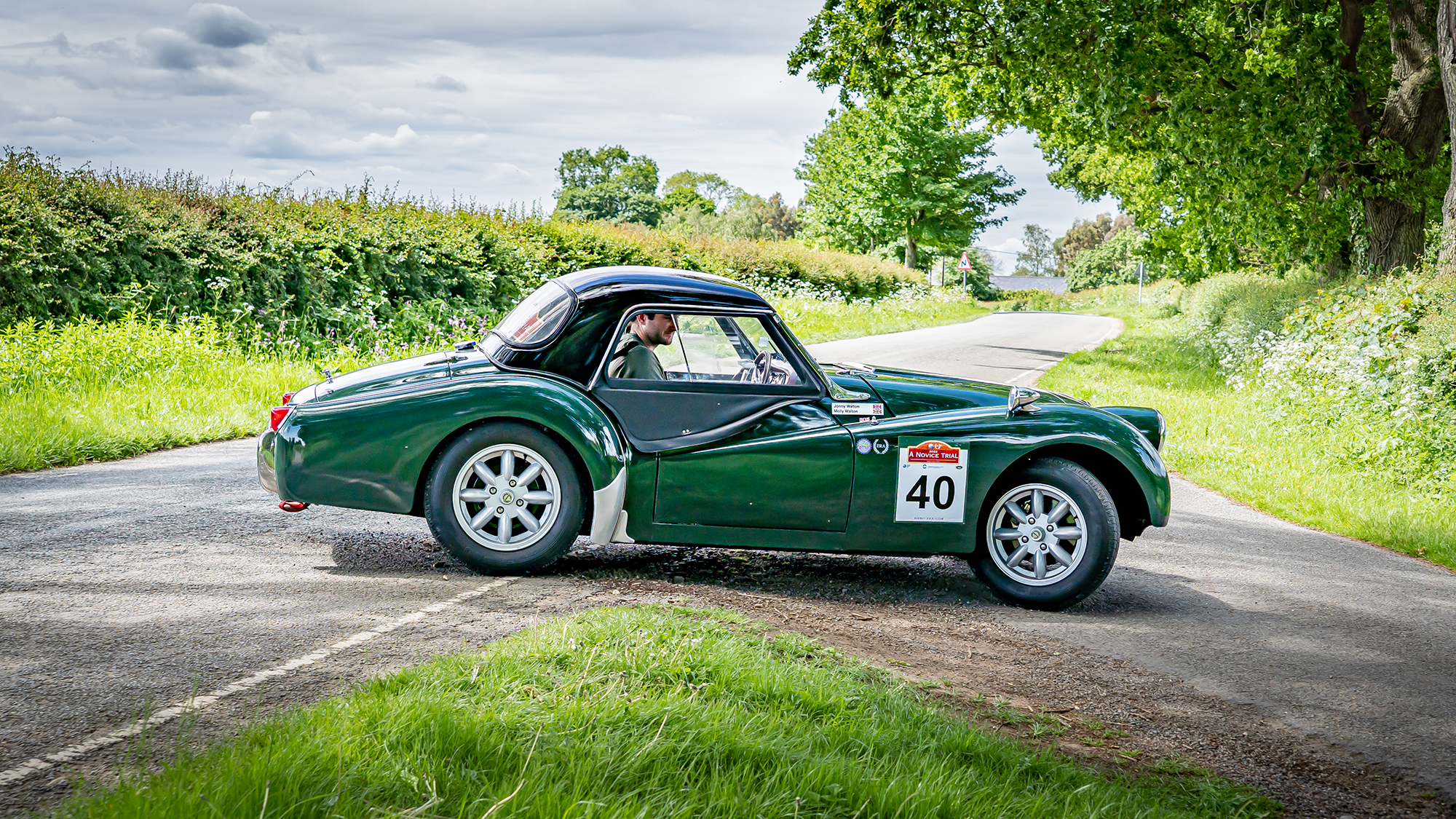 
After one and half days of training sessions on Friday and Saturday, on Sunday 47 crews took part in the Novice Trial. They faced a 150 mile route, consisting of four regularities and four tests.

Competition got underway within a few metres of the start, with two tests at the Bicester Aerodrome, next door to the event’s base at HERO-ERA HQ.

Steve Farmer/Phil McNeelance were immediately in the grove, taking fastest time on both tests in their MGB GT V8.

The class improvement scoring system gives the fastest in class zero penalties, the second getting two seconds and so on to a maximum of ten seconds. This meant that Farmer/McNeelance left the airfield with a clean sheet, as did two others – Jonathan Walton/Molly Walton (Triumph TR3) and Gavin Print/Emma Print (Mazda Eunos Roadster) – who had also beaten all others in their class.

The first regularity started near Middleton Stoney. The section was 13 miles in length, finishing just south of Croughton. There were four timing points.

Farmer/McNeelance continued their superb start and picked up the least penalties on the regularity; they were exactly on time at three of the controls and one second early at the other. Four second behind were David Creech/Chris Wilks (Volvo Amazon); the crew having swapped seats from those they had sat in on previous outings.

The route took crews north past Banbury before the start of the second regularity, which started at Cropredy and finished just before the Coffee Halt at Hellidon. The section was ten miles long and had three timing points.

The best performance here was taken by the youngsters in the Riley Elf, Ben Maidment/Alistair Hastings; they dropped just two seconds. Once again, Creech/Wilks were second with penalties of four seconds.

The only mechanical hitch of the entire event saw Francesco di Valmarana/Alexandra di Valmarana having to miss this reg as their Triumph TR6 suffered over heating problems and they cut to the halt, where mechanical assistance was available. They re-joined and completed the event, taking fastest class time on Test 3.

Farmer/McNeelance held a lead of 14 seconds when they arrived at the Hellidon control. Walton/Walton were in second place, three seconds ahead of Creech/Wilks.

The route now headed back south, with a 15 mile regularity, which ran from Newnham to Chipping Warden. It had four timing points. It was to be the undoing of the leaders; Farmer/McNeelance missed a turning and were three minutes late at the first time control. The penalty was capped at one minute, but they still slide out of the top ten.

Also in trouble here were Rob Windsor/Laura Windsor (Austin Healey BJ8), who had been in fourth place at the coffee halt. They struggled on the section and eventually finished in 24th place.

The regularity didn’t cause any problems for Maidment/Hastings, they put in another best performance. This consistency meant that, at the Finish, Alistair Hastings won the Clock Watchers Award for the navigator with the least penalties on the regularities.

Walton/Walton now found themselves in the lead and extended their advantage over Creech/Wilks by ten seconds on the section.

The final regularity was a speed table test, starting at Moreton Pinkey and finishing at Helmdon. There were two timing points in six and a half miles. Farmer/McNeelance got back into their earlier stride and took best time, dropping three seconds, one better than Creech/Wilks. Walton/Walton were a second further back.

Crews then returned to Bicester for two tests that completed the event. Jonathan Walton/Molly Walton were fastest in their class on both of the tests, so came home to give the Olympic rower and his wife a convincing win. They finished 25 seconds ahead of the field in their Arrive & Drive Triumph TR3.

A late charge saw the father and daughter team of Lee Clarke/Freya Clarke move their Triumph TR4 from seventh at the coffee halt to the runner up spot at the Finish. David Creech/Chris Wilks took the final podium place in third.

After the disappointment of losing the lead, Steve Farmer had the compensation of taking the Test Pilot Award for the fastest times over the four tests.

All 47 starters made it to the Finish, with all having obviously grasped the fundamentals of regularity rallying.