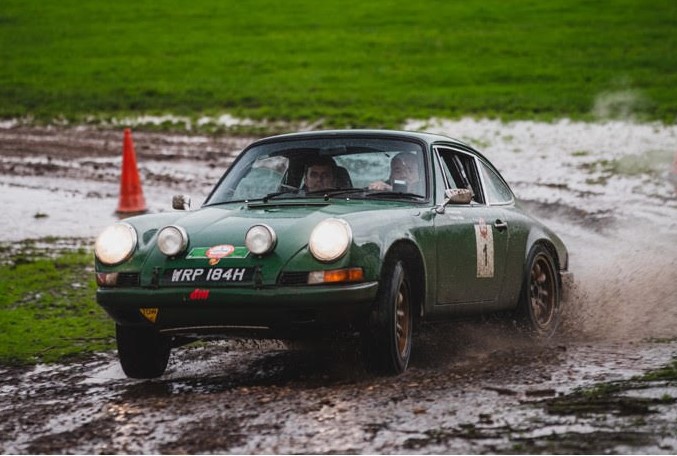 
The first Per Ardua Ad Infinitum was run in December 2020 in the midst of CoVid restrictions. Its format was partly dictated by these limitations; but the short sharp testing event proved popular with competitors and a second edition was produced for early January.

The difficulty of the event was on a par with that of the Le Jog and the Rally of the Tests; challenging even for the most experienced competitors. The rally was based at Taunton and started at lunchtime on Friday, with a full day’s rallying on Saturday. In a 300 mile route there were 14 regularity sections and 17 tests. In addition, there was a frantic time control section within the confines of Smeatharpe Airfield.

Friday’s route took crews to the north-west of the base, with two tests on the Porlock Toll Road. Saturday used the lanes between Taunton and Honition, with a number of visits to both Smeatharpe and Dunkeswell Karting Circuit.

The fifty car entry was reduced, due largely to CoVid quarantining, to 41 starters. The winners of the 2020 Per Ardua, Paul Crosby/Andy Pullan (Porsche 911), were seeded at Number One. They duly took fastest time on the opening test at Westonzoyland and put in the best performance on the first regularity, this put them into a lead they weren’t to lose.

If crews thought that they would have a gentle introduction to the event, they were wrong. The first two regularities, using lanes to the west of Street, included three timing points in farm yards. Only roughly half the field managed to find all the controls.

The weather had been typical January cold rain for the opening sections, however as the course cars headed into the Quantocks, they found that snow of falling on icy roads. The conditions were challenging, but were quite passable for rally traffic, however problems caused by non-competing vehicles becoming stuck or panic struck, this meant that it was decided to avoid those lanes. Regularity 1/3 was cancelled.

Two regularities, spilt by a fuel halt at Wheddon Cross, led competitors to the very popular Porlock Village Hall, where the meal was provided by the ladies of the local WI. By this point Crosby/Pullan had extended their advantage over Bloxidge/Canavan to 24 seconds. While Kelly/Johnson were still in third, but were now sharing that position with Thomas Bricknell/Roger Bricknell (VW Golf GTi). This battle was to continue until the Finish.

Two tests on the Porlock Toll Road and three regularities faced crews through the darkness back to the rally base at Taunton. Paul Day/Alun Jones became first retirement of the event, when the clutch on the Ford Coupe failed at Porlock.

At the end of Day One, Crosby/Pullan had a lead of 1m16s. Bloxidge/Canavan were still in second, while Bricknell/Bricknell had opened up a 12 second gap to Kelly/Johnson, who were now fourth. Hanson/Grove, in fifth, were the only crew with under six minutes total penalties. Unfortunately for the latter crew, their Maestro was to suffer electrical failure just after the restart the following morning; they were out.

Chris Pearson/Derek Brader didn’t take the restart on Saturday; broken steering on their Volvo Amazon forcing them on to the retirement list.

Torrential rain showers were the order of the day for Saturday, Day Two of the event. Despite these conditions, marshals remained in buoyant mood.

Two regularities in the Blackdown Hills, were split by four tests at Smeatharpe Airfield; then there were two tests at Mansell Raceway, Dunkeswell, before the first break of the day.

Crosby/Pullan were fastest on five of the tests and put in the best performance on the opening regularity; they were second on the following one. It wasn’t surprising therefore that they arrived at the halt with a lead of 1m43s. Bloxidge/Canavan were pulling away from Bricknell/Bricknell, who in turn were opening the gap to Kelly/Johnson. These four crews were well clear of the rest of the field.

The third regularity included a tricky piece of navigation using spot heights and grid lines; many crews missed a loop which included two timing points. Significantly Elliott Dale/Charlotte Ryall (Ford Escort) were amongst these crews; the error dropped them from fifth to ninth place.

More tests at Smeatharpe and Dunkeswell followed, but other than extending the gaps, the leading positions remained the same. However, Regularity 2/5 caused problems for Bricknell/Bricknell. The section was defined by gridlines at a point where the Easting and Northing lines had similar, and some cases, the same numbers. The son and father team lost almost two minutes on the section and arrived at the afternoon coffee halt in fourth, now 17 seconds behind Kelly/Johnson.

After the afternoon halt at the Otter Inn near Honiton, competitors returned to Smeatharpe for a time control section, this included seven TCs and eight PCs.

Jason Stone/Daniel Stone (Ford Escort) were fastest through the section, two seconds faster than Crosby/Pullan. Stone/Stone were leading the Newcomer competition, for individuals competing on their first HERO-ERA event, also the driver had been challenging Paul Crosby for the Test Pilot Award. After the rally’s 17 tests, Stone ended just five seconds behind the Porsche driver.

Despite these successes the brothers had been nursing a sick clutch on their Escort since Friday evening. The component finally failed at the end of the time control section and they had to miss out the final regularity to make the Finish.

Their demise saw the Newcomer driver award go to Jacqui Hellings in her immaculate Ford Fiesta, while the Newcomer Navigator prize was taken by Ken Comerie, who guided Toby Strauss to 18th overall in their Saab 96.

The TC section also saw the departure of the Renault Gordini of Malcolm Dunderdale/Anita Wickens; the French car’s engine failing towards the end of the section.

The focus over the final sections was whether Bricknell/Bricknell could regain their long held third place. They took 20 seconds from Kelly/Johnson through the Smeatharpe TCs, this put them back in third place by three seconds. The Isle of Man v South West battle was resolved on the final regularity, where Kelly/Johnson picked up the fewest penalties of any crew. Bricknell/Bricknell put in the fourth best performance, but, vitally, added 15 seconds to their total, compared to Kelly/Johnson, who added 11. This gave the latter pair third place by one second.

Crosby/Pullan came home to take a dominant win, finishing almost three and a half minutes ahead of Bloxidge/Canavan. Pullan also took the Clockwatchers Award for the best performance over the event’s 14 regularity sections. His total penalties for these was almost two minute less than his nearest rival.

The 2020 HERO Challenge Cup winners, Alistair Leckie/Matt Outhwaite, had to make a last minute car change after the starter on their regular Saab 900 Turbo failed on the day before the event. They used Simon Ayris’ MGB Roadster as a substitute. They came home in 12th overall position and won the strongly contested Class 2.

The win also put Paul Crosby into an early lead in the 2022 HERO-ERA Cup; each of the Per Ardua’s two legs being first two rounds of the series.